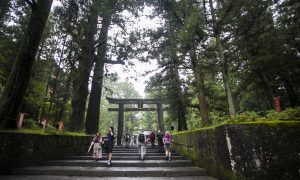 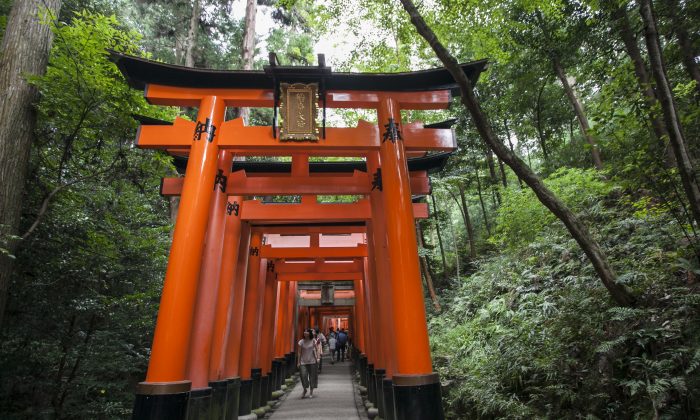 On the table was a spread of dishes crafted according to centuries of tradition and made entirely from vegetables. Ikkyu, a restaurant that has been catering vegetarian meals to the nearby Daitokuji temple since the 1400s, has honed cooking into something beyond just preparing a dish. It’s become an artful way to capture the sentiments of the season, as seen in a bowl of soup made from spinach and matsutake mushrooms, Japan’s prized harbinger of autumn. An herbaceous fragrance enveloped my nose as I took a sip, the soup as delicate as the tree leaves rustling gently outside. Floating on top was a small bundle of yuba, made from the thin layer that forms on boiling soy milk, with faint earthy notes that added to the clean, refreshing aftertaste.

On my lacquer tray were other delightful bites made from plants and vegetables that had just come into season: purple yam stems marinated in miso and vinegar, piquant and inviting; bits of sweet chestnut—unadorned and unseasoned—embedded in rice; and lily root mashed and formed into a savory dumpling, with a fermented black bean inside.

This type of cooking, commonly found in temples across Japan, was a precursor to kaiseki, the highly refined, multicourse meal that is the epitome of Japanese food culture. Temple cuisine, known as shojin ryori, along with the foods of aristocrats and feudal lords, formed the foundation for what is now considered traditional Japanese cuisine.

Kyoto was the ancient capital of the country; temples flourished there, and shojin ryori became part of the city’s fabric. Ikkyu’s owner and chef, Yoshiaki Tsuda, said the restaurant was named after a monk who often entertained important visitors to the Daitokuji temple. When it came time to prepare meals for the grand ceremonies held within the temple’s walls, locals decided to help the monk. One of those townspeople later founded the restaurant.

Shojin ryori is typically much simpler fare, but because Ikkyu served feudal lords, the meals prepared there are more elaborate. Instead of using just salt for seasoning, Ikkyu also employs vinegar, soy sauce, and spicy ingredients. But the core of all temple cooking comes from a simple principle: “Shojin ryori means to cook from the bottom of the heart, to always be improving,” Tsuda said.

The recipes, passed down from Tsuda’s ancestors, helped to define Ikkyu’s unique style. Rules about what amounts of oil can be used for different kinds of frying—specific to certain ingredients—or requiring all five flavor components to be in each dish, have been followed for centuries. “We must preserve the tradition,” he said.

Over time, the vegetarian aspect of temple cooking has made its way into the homes of Kyoto residents as well. While taking part in a cooking class by WAK Japan, a women-run organization that introduces foreign visitors to local experiences in Kyoto, I learned about a type of home cooking unique to the city, called obanzai.

My instructor, Machiko Kimura, told me that obanzai is mostly vegetarian. The dishes are made with tofu and fresh local vegetables that can only be found growing in the Kyoto region. The green peppers in a teriyaki tofu dish we cooked were a mild variety grown in Kimura’s brother-in-law’s garden. As shimeji mushrooms were at their peak, Kimura cooked them with rice.

Surrounded on all sides by mountains and rivers, Kyoto is a short distance from Lake Biwa, Japan’s largest freshwater lake. The water is said to be the reason why Kyoto’s tofu is the best in the country.

Kuniyoshi Yamamoto, the third-generation owner of the Toyoukeya tofu shop in Kyoto, uses tap water to make his tofu because it is neutral—not too acidic or alkaline. Yamamoto, a cheery elderly gentleman who practices karate in his spare time, showed me around the shop where he and his staff make tofu every day. Bins and bags of soybeans lay everywhere; they came from the United States, Japan, China, and other countries. He sources them from different places in a continual search for the best quality, and so as not to overburden the soil.

Yamamoto said good tofu should have a natural sweetness. He gave me some soft oboro tofu, the curds formed before tofu coagulates. It had a pleasant sweetness, but also a rich bean taste—much more flavorful than any tofu I’d had before.

Yamamoto wants more people, not just Japanese, to realize tofu’s culinary and health properties. At the restaurant adjacent to his shop, he and his wife experiment with recipes featuring tofu products, from yuba mixed with a thick, gravy-like sauce and served with rice, to a tofu dessert—like a goopy pudding—drizzled with fruit syrups.

The ultimate expression of tofu, though, is at Tousuiro, a restaurant that specializes in serving tofu kaiseki. Tofu in various guises was paraded to the table, one after another, accompanied by the fruits of autumn: herbaceous chrysanthemum petals mixed with tofu; oboro tofu simmered in a wooden pot with spinach and kelp; grilled tofu skewers glazed with sweetened miso; and a deep-fried ball of tofu mixed with grated yam, lotus root, and wood ear mushroom.

If you stroll through Kyoto’s famed outdoor food market, Nishiki, you’ll notice many shops selling an astounding variety of pickled vegetables, the city’s other prized jewel. Sampling the crispy, crunchy bits is a delightful experiment; I’d never imagined that tartness could have so many iterations.

Murakami-ju Honten is one of the city’s most well-regarded shops, having been granted the use of the family crest of a feudal lord in Kyushu who took a great liking to its pickles. Eri Murakami, the daughter of the owning family, explained why Kyoto became known for pickling. Owing to the city’s distance from the sea, people in the old days did not have access to fresh seafood and had to rely on pickling to preserve their foods. The tradition blossomed, with a complex array of ingredients for the brine and different aging times. Murakami-ju’s most popular one is senmai-zuke, sliced turnips in a brine of rice vinegar, kelp, and red pepper. “The seasoning and vegetables work together to bring out [the vegetables’] natural flavor and texture,” she said.

It may seem impossible to cover all of Kyoto’s many beautiful historical sights while visiting. But on my last day, I set out to visit just one more. I arrived at Ginkakuji Temple, where the garden foliage blended seamlessly with the mountains overhead, with wisps of red and yellow, as the leaves had just started to turn. It was a scene I didn’t want to part with. Strolling through the temple garden one more time, I thanked the people before me who had the wisdom to create and preserve such elegance—and vowed to return someday.

Kyoto may seem overrun with tourists at times. For an escape to a quieter but equally cultured city, stop by nearby Uji, just 20 minutes away by train. For centuries, the city sent its cultivated tea to the capital as tribute. Uji is known for producing some of the world’s most prized green teas, including gyokuro, considered the finest quality. Similarly to matcha, the leaves are grown in the shade to produce a unique umami taste. The delicate tea is not bitter in the slightest and goes down smoothly. For a fee, you can experience leaf-picking during harvest season at the Hattori tea farm.

Asahiyaki, also in Uji, is a pottery workshop that has been making teaware for the past 400 years and bears the imperial seal—a mark of the imperial family’s favor. Its distinctive feature is a transparent glaze that allows you to see the color of the clay. Using clay from nearby Mount Asahi and water from the Uji River, the pottery turns a light pink when fired at a low temperature. The workshop follows the aesthetic of a samurai and tea master from the early 17th century, Kobori-Enshu.

Matsubayashi Toshiyuki, the son of the 15th-generation master, tried to explain the philosophy, but couldn’t quite find the words. “It needs to convey a scenery,” he said. But, at the same time, “Pottery is not art. It’s a utensil. You want it to be used during the tea ceremony, and not just to look at,” he added. You can try your hand at making teaware by signing up for classes at the workshop.

There are plenty of historic attractions as well. Byodoin Temple, now a UNESCO World Heritage site, is engraved on the 10-yen coin. Seen in person, the main Phoenix Hall is majestic and perfectly balanced in its symmetry. The hall houses an equally impressive Buddha statue covered in gold leaf.

Leading up to the temple is a shopping street filled with shops and restaurants selling all sorts of green tea-infused goodies, from soba noodles to biscuits to soft-serve.