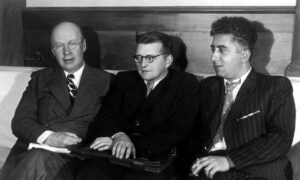 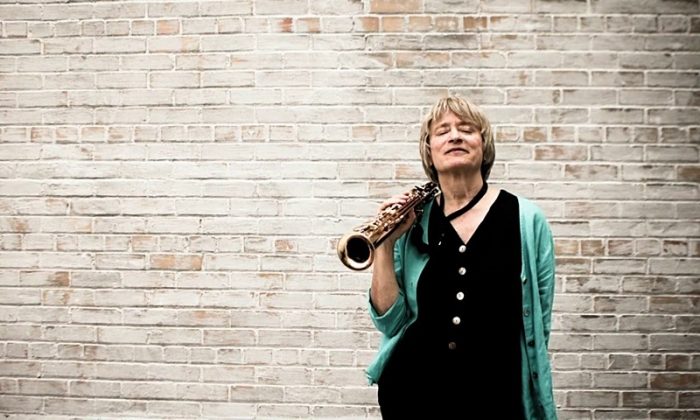 NEW YORK—Jane Ira Bloom and her quartet appeared at New York’s Baruch Performing Arts Center as part of the Milt Hinton Jazz Perspectives Concert Series. She and her group performed music from her latest recording, “Wild Lines: Improvising Emily Dickinson” (on Outline). This is a double-CD set, one with just music and the other with the musicians accompanying readings from Dickinson’s work.

Bloom plays soprano saxophone and has won numerous awards, including a Grammy this year for best surround sound album and the 2017 Downbeat International Critics Poll for soprano saxophone. One of the most animated jazz musicians, she sways and almost dances as she plays and also takes obvious pleasure in the work of her band members, who are long-term collaborators of hers.

Her group on both the recording and the concert included Dawn Clement (piano), Mark Helias (bass), and Bobby Previte (drums). The actress Deborah Rush recited the poems, often imbuing the verses with a sense of wonder.

The morning after the concert, I conducted a telephone interview with the artist.

Since she is a trailblazer among female jazz instrumentalists as well as one of the few who specializes on the soprano saxophone, I asked about her early influences. Her inspiration for taking up the instrument is attributable to her teacher, Joe Viola, she said. Although he was not an improviser himself, he had a thorough knowledge of jazz history, possessed “a sound like no other,” and wrote books on technique that are still influential.

When Bloom was 13, she started on alto sax. (In fact, when I first saw her, in the Broadway musical “1940s Radio Hour,” she was playing alto.) Then, because of Viola, she took up the soprano. She was also impressed by John Coltrane’s soprano playing.

As to the fact that there are more women playing jazz today, she credits the younger generation. She is a professor at The New School’s College of the Performing Arts School of Jazz and finds that  each generation of female students has “more of a commitment to jazz.” There are opportunities for women players now that didn’t exist when Bloom started out. She noted, “A lot of the energy comes from the women themselves. They are trying to make the world right.”

She has a long-term relationship with each of the band members and that’s the way she likes to work. There is “unconscious communication” that takes place when the players have a history together.

Bloom thought of a jazz work based on the Dickinson’s (1830–1886) creations, in part, because poet played piano and was an improviser. For the Dickinson project, the poems Bloom selected were “those that got to me.” But she picked selections from the poems rather than using the complete poems.

Bloom’s husband, Joe Grifasi, is an actor, and she met actress Deborah Rush years ago on a movie set where he played a role. They became friends and Rush’s “was the voice [Bloom] heard” when she conceived the work. Bloom credits the actress with bringing “enormous resonance” to Dickinson’s words.

The cheering audience at Baruch felt the same way. The woman sitting in front of me said she had seen Bloom perform about 40 times. She arouses that kind of loyalty from many of her fans.

Jane Ira Bloom’s music, melodic and accessible, is worth seeking out on CD, online, or in live performances.

Among upcoming concerts of interest at Baruch is pianist Michael Brown on April 18 at 7:30 p.m. in a program entitled, “Bernstein at 100,” which will include works by Leonard Bernstein as well as Lucas Foss, Aaron Copland, George Perle and the pianist himself.

On May 18 at 7:30, pianist Conrad Tao will collaborate with Caleb Teicher & Company for a music/dance piece.