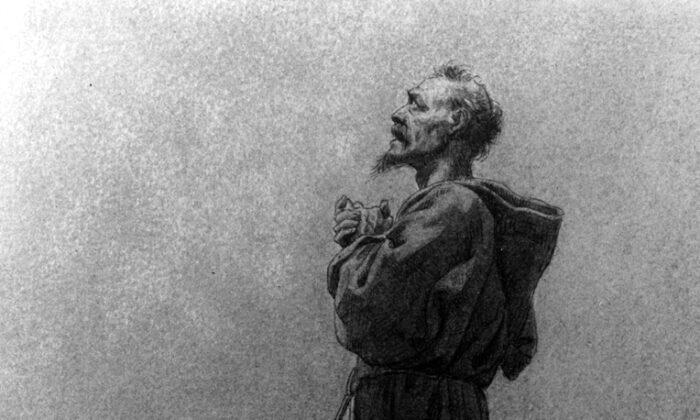 Elevating Above and Beyond: ‘St. Simeon Stylites in Egypt’

Simeon Stylites (circa 390–459) endured the unimaginable in order to elevate himself and get closer to God. At a young age, he heard a sermon on the Beatitudes and decided to devote his life to being pure in heart so that he would be one of the blessed ones close to God.

It wasn’t long before Simeon entered a monastery to practice severe self-discipline and self-deprivation, a personal brand of asceticism, to purify his heart. The other monks, however, found his type of asceticism too extreme and exiled him from the monastery.

Simeon remained undeterred and continued to practice his self-denial by himself in a small hut. After three years, he left his hut and lived out in the desert as a recluse. Here, out in the open, is where he felt he could sincerely practice.

People began to hear about Simeon’s extreme form of asceticism and came to see him as a holy man. Many began pilgrimages either to follow him, to ask him about God, for advice, or to be healed.

However, the time Simeon spent with these followers interfered with his time spent purifying his heart in devotion to God. Simeon noticed a pillar of an ancient ruin; inspired, he built a pillar that would elevate him above the followers so that he could continue his practice in solitude.

His first pillar was only four yards high, but many followers supported his spiritual endeavor, and it wasn’t long before they helped him build a pillar reaching 15–20 yards off the ground. The followers would wait for him to share his heavenly wisdom and would even bring food up the pillar for him.

Simeon would spend the rest of his life atop his pillar, purifying his heart with his ascetic ways in an attempt to get closer to God. He would die in prayer.

Louis Frédéric Schützenberger’s creation “St. Simeon Stylites in Egypt” shows Simeon on his pillar in deep devotion. He stands just right of center with his hands clasped and his eyes closed, and he dons the hooded cloak of a Christian monk.

On the top of the pillar, hanging from the ledge, are several items. One might be a rosary that Simeon may have used in prayer. The other appears to be a bag of food that followers would have brought him from time to time.

Below, in the bottom left corner, can be seen pillars of ancient ruins. Schützenberger employed little contrast in these elements; they do not capture our attention and so play only a supporting role to the focal point of Simeon.

Simeon faces the upper left of the composition, where a light shines bright. His upper body does not have any background elements to compete with for our attention; it’s just him and the light he faces.

The Kingdom of Heaven Within

Here, Simeon’s appearance reminds me that transcendence, as a purified relationship with God, comes from within.

To me, Simeon’s body language expresses deep and sincere feelings. His hands are clasped in front of his heart, and his mouth is gently open as if each breath is infused with love.

Simeon’s eyes are closed and he can’t see the light that he faces, but it looks as if he can still deeply feel the light’s warmth. The furrow of his brow suggests the intensity of what he feels.

I can’t help but think that these ancient pillars in the background represent upright, ancient traditions. Such traditions can serve as an initial step to elevate us above the mundane, but they are no replacement for a sincere and pure relationship with God.

Though the food and rosary are at his feet, Simeon does not seem concerned with them. Like the ancient pillars, the rosary may have initially been used by Simeon as a catalyst to spiritually elevate himself, but now the rosary rests at his feet. Though he still eats, having spent years fasting for months on end, he seems to care little for food.

It seems that initially, Simeon tried to actually elevate his body to get closer to God, but at some point his further spiritual growth required that his elevation occur within him: that he not only endure pain, but that he also purify himself, that he cleanse away the mundane things from his heart and mind to get closer to God.

Maybe we too must learn the value of purifying ourselves from within, of elevating ourselves above and beyond the material world by cleansing our spirits so that we may be worthy of being close to God and God’s light.

Maybe by purifying the kingdom of heaven within ourselves—like preparing our homes for a respected guest—we are being hospitable to God’s love. What better guest can we welcome to our kingdom within?