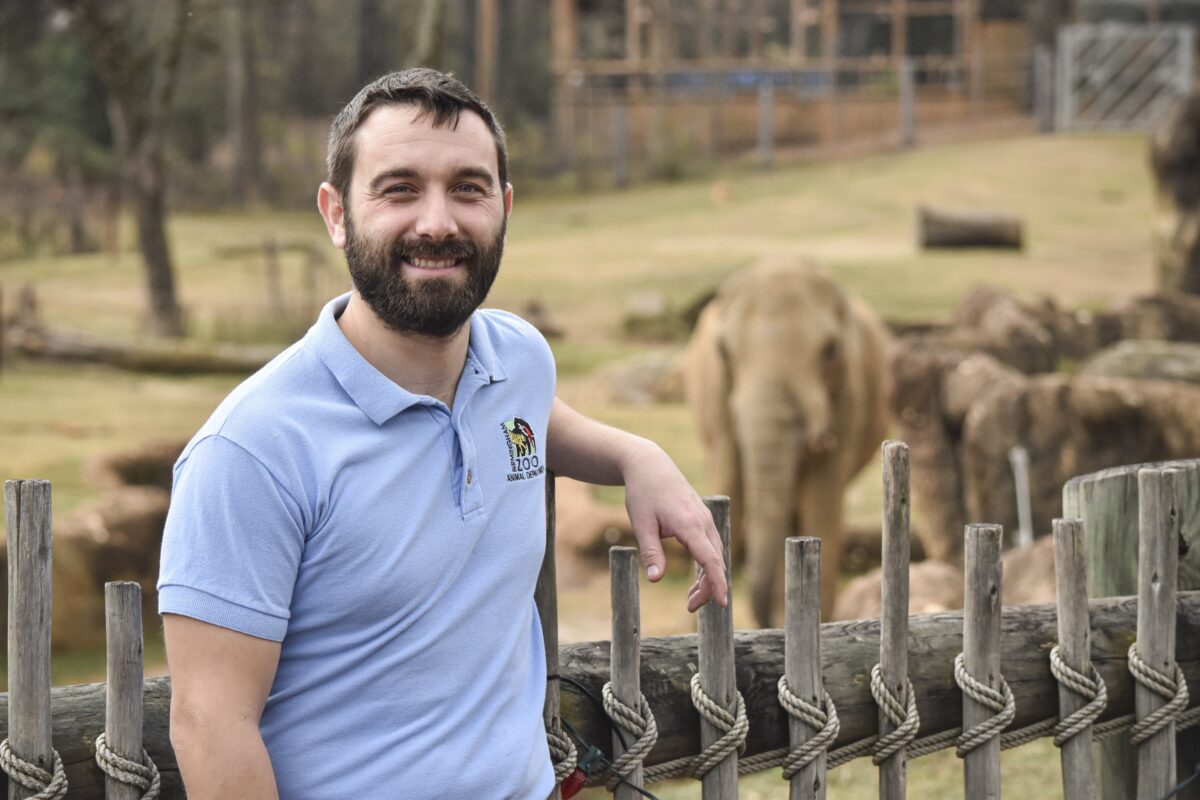 Adam Brooks looks more like a banker than an elephant keeper. The 29-year-old assistant curator at the Birmingham Zoo is a clean-cut young man with a happy smile and an easy demeanor. He is in charge of three massive African elephants and all the primates at the facility.

Adam adores his job, including feeding time. On a winter afternoon, he approached the elephant enclosure and hollered three names. The humongous African elephants made their way toward him like slow, hungry puppies. They knew that food would follow. When they neared the edge of the enclosure, Brooks tossed each a hefty bale of hay. The animals grabbed the hay with their trunks and shoved it into their mouths. The littlest of the three took some hay and strolled away from the other two.

“He does that so the big one here doesn’t eat his food,” Brooks said, chuckling. Sure enough, when the big dominant elephant finished his bale of hay, he meandered over to where the smaller one was and cleaned up the rest of his pile.

Brooks did work at a bank right after graduating from Texas A&M University, where he majored in biology. If you had told him then that he would later end up taking care of African elephants, he would have said you were crazy!

“I love working with the elephants here,” Brooks said. “These guys are as smart as a 5-year-old human.” He added, “We train them to do certain things and they quickly figure it out,” especially when solving puzzles to get their food. “They seem to find a way around things. One got into that area over there the other day. He wasn’t supposed to.” Brooks pointed to an area where the trees were stripped clean.

Brooks’ job can be challenging at times. The elephants require much care and attention. “They eat two to three hundred pounds of food a day, mainly hay. Sometimes, we give them vitamins and supplements.”

The three elephants at the Birmingham Zoo are from Africa. They differ from Asian elephants, mainly with their trunks, where they have two protrusions. That gives them much dexterity.

“These elephants can do a lot with their trunks. They’ll eat the entire tree. You can tell how far they can reach onto this grass over here,” Brooks said, pointing to an area where the grass is shorter than the rest.

Brooks has learned many fun facts about the creatures. “Elephants can communicate by infrasound, a lower frequency than humans can hear. They can talk to each other over miles,” Brooks said. “And they live to about 50 years.”

The largest and dominant African elephant at the Birmingham Zoo is named Bulwagi. He weighs 12,000 pounds. The smaller ones are Gadze and Luti, and they weigh 6,000 and 7,000 pounds respectively. All three seem to have a calm and peaceful nature.

“These elephants have different personalities. Bulwagi is laid back. He’s relaxed and will let anyone work with him, as long as you have food. He’s also excellent at filling his social role as the one in charge. Luti is a little bit of a bulldozer—he might throw a tantrum,” Brooks said.

It is evident from listening to Brooks how much he holds his job in high regard. He speaks of the three elephants as someone might about his or her dog.

“This job is different every day. We may come in and one of the elephants has a scratch, or a tree has fallen. I enjoy being outside watching the animals interact. I can do this every day,” Brooks said. “They’ll hang out and let us wash them and take care of their feet. They plop their huge feet up so we can work on them, and they will let us draw blood from their ears [for health checkups]. We have built a relationship with these guys.”

Another fun fact is that African elephants have 40,000 muscles in their trunks, compared to the entire human body, which has a few hundred. They can accomplish many tasks and grab a multitude of objects. Their tusks grow 6 inches every year, but they wear them out as they rub against trees and dirt.

Different threats worldwide are endangering the wild elephant population, with poaching being one of the main culprits. Ivory tusks can be as valuable as gold in some countries.

“It saddens me to learn about elephant poaching. The Birmingham Zoo contributes to the IEF, International Elephant Foundation, which supports African elephants,” Brooks said.

After the three elephants finished their food, they slowly made their way back into the vast enclosure. Bulwagi peered back, pausing a bit, seemingly to make sure all the hay was gone.