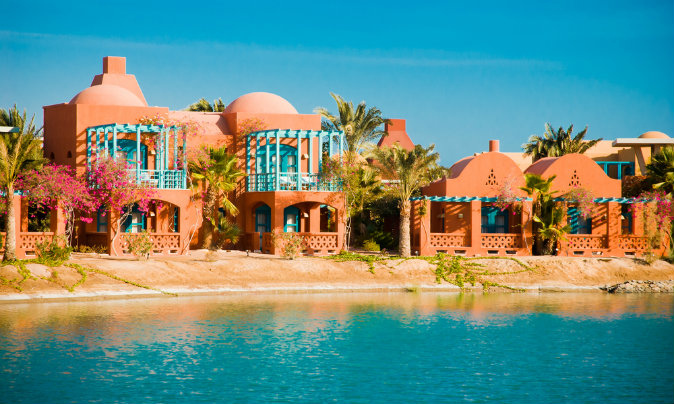 The hustle and bustle of Cairo – from the political tension that has gripped every Cairene to the incessant use of car horns by Egyptians – can often be hard to cope with. So, it is no surprise that many Europeans and foreigners tend to avoid Cairo all-together, and instead flock to Egypt’s turquoise Red Sea during the winter and summer holidays. Along the Red Sea there are many renowned resort towns.

What defines Paradise? Religiously, paradise is defined as a ‘heavenly’ location where one experiences timelessness, peace, comfort, and an abundance of happiness. El-Gouna captures each of these characteristics of ‘paradise’. Whether you spend your time at the five-star hotels, such as the Sheraton Miramar Resort (where the majority of my time was spent), the Movenpick, or the Steinberger Golf Resort, or at four (or lower) star hotels, such as Club Med, you are bound to experience ‘paradise’.

The Sheraton Miramar uses the beauty of El-Gouna excellently. All rooms – including the dining areas – have spectacular views of the Red Sea”s crystal clear, turquoise water.

Even while simply walking from one location to another inside the large sprawling resort, visitors are treated to stunning images. The Architectural design throughout El-Gouna – regardless of the hotel – seems rather uniformed: buildings are inspired by Mediterranean and Middle-Eastern architect and tend to be characterized with specific earth and sea-color tones.

Although there is this visual-uniformity throughout El-Gouna, each hotel and area of the town provide their own unique flavor. The result: a perfect blend of traditional and modern elements that allows El-Gouna’s natural landscape to standout above other locations across the Red Sea and the globe.

This article was written by Egyptian Streets. Read original here.