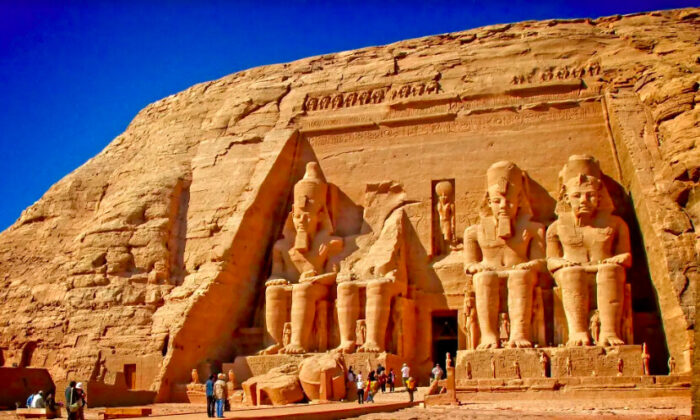 At the Great Temple of Abu Simbel, also known as the Temple of Ramses, four gigantic figures of Egypt’s longest reigning Pharaoh tower 66 feet high and are set against a 108-foot-high façade recessed into the side of a cliff. (Fred J. Eckert)
Destinations

Egypt Beyond the Pyramids

“How could I have been so foolish as to have missed this until now?” I asked myself one day while 785 miles south of Cairo visiting Abu Simbel, down near the Sudan border, in an area where the ancient Egypt of the pharaohs once stood looking out toward the ancient Kingdom of Nubia.

As I looked up at four colossal sandstone statues of the great Egyptian King Ramses II seated upon his throne wearing a huge double crown signifying reign over both Upper and Lower Egypt, I felt the same way I felt the first time I gazed upon such wonders as the pyramids, the Great Wall of China, the Taj Mahal, or the effigies of Easter Island.

I had been to Egypt twice before, but only to Cairo to see the pyramids and explore the Egyptian Museum of Antiquities. Now I realize that just isn’t enough. To truly appreciate Egypt, you have to look beyond the pyramids.

The four gigantic figures of Egypt’s longest-reigning pharaoh tower 66 feet high and are set against a 108-foot-high façade recessed into the side of a cliff—an absolutely incredible work of ancient Egyptian art that rivals the pyramids. Not many steps away, a smaller temple is flanked by six 35-foot-high alternating statues of Ramses II and his favorite wife Queen Nefertari, portrayed as the goddess Hathor.

Both the larger Temple of Ramses II and the smaller Temple of Queen Nefertari were erected in the 13th century BC to impress and intimidate visitors traveling from southern Africa with this stunning display of the grandeur of Egypt and the greatness of Ramses II. Later abandoned, they remained buried for centuries until discovered in 1813 by a Swiss explorer who noticed their heads sticking out above the sand.

That last visit of mine had begun—as most visits to Egypt do—in Cairo, where I visited the Egyptian Museum of Antiquities and the pyramids, as well as the museum containing the funerary boat of the Pharaoh Cheops, whose nearby pyramid is the largest of the three pyramids on the Giza Plateau, the other two being the pyramids of Chephren and Mycerinus.

Given all the tumult of recent years, you might seriously hesitate about considering Egypt among your top choices to visit. But it has been making a surprising return to form. In 2018, more than 11 million tourists visited Egypt, and the World Tourism Organization recently ranked it as the world’s fastest-growing travel destination.

No wonder: It’s such an awesome feeling to look at the pyramids and the Great Sphinx, the 66-foot-high and 190-foot-long face of a man (a pharaoh, perhaps?) and body of a lion that guards the pyramids.

From Cairo, we flew 420 miles south to Luxor, the land of Thebes, capital of the New Kingdom. Here, succeeding pharaohs built two great temples along the east bank of the Nile.

The Temple of Luxor, entered through a façade marked by giant statues of the pharaoh who built its first pylon—Ramses II—is compact compared with the Temple of Karnak, which is located just under two miles away. The two are linked by a path flanked on each side with a row of sphinxes.

Karnak, not only more sprawling but also more convoluted, is best known for its Great Hypostyle Hall, with 137 gigantic columns and a footprint bigger than the area of Notre Dame Cathedral in Paris.

Nearby, on the west bank of the Nile, we visited the Valley of the Kings (best known for the early 1900s discovery of the more than 3,000-year-old tomb of Tutankhamen) and the Valley of the Queens. Tombs of many rulers and family and nobility were carved deep into hard rock in these valleys by rulers who preferred that to pyramids.

Also in this area the magnificent Temple of Hatshepsut, ancient Egypt’s only female pharaoh, stands in a great amphitheater at the foot of a sheer limestone cliff; you’ll also find the Colossi of Memnon, two faceless 60-foot-tall enthroned statues of Pharaoh Amenhotep III, one of which the ancient Greeks and Romans believed emitted a singing sound each dawn.

Cruising on the Nile

As interesting as monuments and ruins of the ancient world may be, there is also much to be said for the amenities of the modern world, which is why the best Egypt trips show you some the best of way back then while making sure you experience some of the finest of right now.

How nice it was, upon returning from a great ancient site, to step aboard a fully air-conditioned boat and sail on to our next destination down the Nile River in a sort of floating five-star boutique hotel.

My cabin on Sun Boat IV—the ship has 36 cabins plus four suites—was unusually spacious, with full-width floor-to-ceiling windows, a decent-sized ensuite bathroom, and a very comfortable bed. It was nicely decorated and included a color satellite TV and a direct-dial international telephone. Internet access was available on ship as well.

This beautifully refurbished ship, superbly furnished and decorated in contemporary style with Art Deco influence, has a chic lounge area and bar, a well-equipped gym, a good library, a small pool, two spacious sun decks, and a comfortable restaurant featuring picture windows so you can take in the scenery while dining.

Activities onboard included a slide presentation by our professional Egyptologist guide, an authentic Egyptian folklore performance, and a party for which we were each provided a souvenir “galabeya,” the traditional Egyptian outfit, to wear.

The food—a wide selection of American, Continental, International, and Egyptian—and the service were outstanding.

Between the Luxor area and Aswan, we stopped along the Nile to visit three additional sites. At Edfu, we visited the Temple of Horus, the falcon god. At Kom Ombo, we visited a Greco-Roman temple, where one half is dedicated to Horus the Elder, or Haroeris, a falcon god combined with a god of light whose eyes were the sun and the moon, while the other half is dedicated to the crocodile god Sobek. In the Aswan area, we visited the magnificent Philae Temple, site of an especially beautiful temple shrine honoring the greatest of Egyptian goddesses, Isis.

Wherever we went, our Egyptologist guide brought history to life by carefully explaining the significance of wall etchings and deciphering for us many of the things written in hieroglyphics.

Sometimes during the trip, I’d sit on the deck of Sun Boat IV, sipping coffee in the morning or having afternoon tea, pondering the wonders I had seen thus far and soaking up views of the Nile. Small, distinctively Egyptian sailboats called feluccas sailed by carrying people or materials or even animals; a lone farmer toiled his small plot in the fertile soil near the shore of the great river; a youngster rode along a shore path on a donkey, swishing a palm branch against its side, making it move along faster—scenes surely no different from what I would have seen had I been there centuries earlier.

What a wonderful way to experience Egypt!

Information: A number of leading tour operators serve Egypt. My trip was through Abercrombie & Kent (AbercrombieKent.com, 800-554-7094).

Best time to go: During winter. It’s extremely hot in Egypt in the summer.

Safety: Because tourism is such a crucial part of Egypt’s economy, its government focuses keenly on security. It’s still wise to take every precaution.

Travel tip for peace of mind: If you ever had to be medically evacuated while traveling, it could cost you tens of thousands of dollars. Many plans that claim they cover this fall far short. My wife and I cover ourselves against this with membership in MedjetAssist (MedjetAssist.com, 800-527-7478).

Guidebooks: “DK Eyewitness Travel Guide: Egypt “ was the only one I took with me on this trip. It is compact yet thorough. Its three-dimensional appearing maps and highlights at a glance made navigating sites on my own easy when I felt like wandering off to check out photographic opportunities. Their great photography makes these guidebooks nice mementos of your trip.