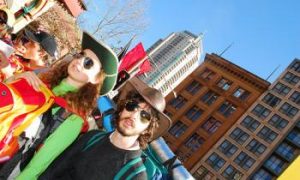 By Epoch Times Staff
Print
LUDWIGSBURG, Germany—As a prelude to a planned Beijing trip, Martin Schechler, editor in chief of the Stuttgarter Online news paper and his son attended the April 20 show of Shen Yun Performing Arts Touring company at the Ludwigsburger Forum am Schlosspark.

His son was the impetus to take in the show, as he had heard about the Shen Yun show already two years ago in New York.

With a twinkle in his eyes, he recalled, "I had seen an advertisement and made some inquiries. I was so fascinated that I absolutely had to see this."

His expectations were not disappointed. "It was marvelous, wonderful. Even the music was harmonious and was a perfect accompaniment to the dances. I will definitely recommend this show to others."

His father would like to recommend the show to anyone who is even modestly interested in China.
"It was a nice cross-section through China's history, with the various traditional dances, just like the advertisements promised," he said.

The digital backdrop with its changing pictures, "were fascinating; almost a bit playful, but nevertheless suitable with all the glorious colors. The choreography was marvelously synchronized; almost flawless. I wonder if this is a general Chinese characteristic—such discipline and accuracy. I have never seen anything like it, nor expected it!"

Schechler also commented about the "humorous moments" in the presentation, such as Little Mischievous Monks, but added that he is rather unfamiliar with Chinese mythology.