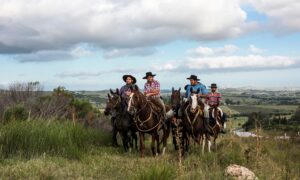 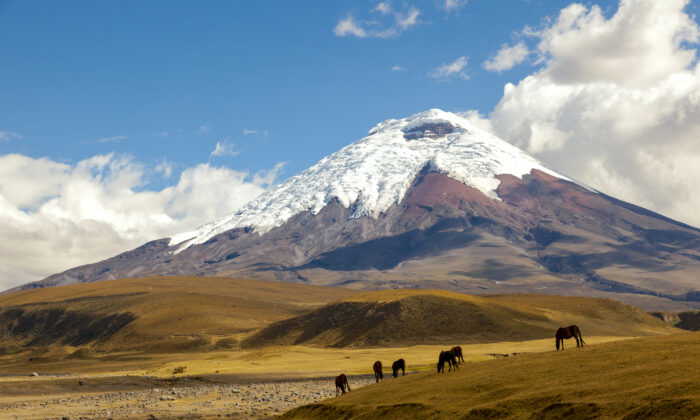 Horses graze in the shadow of Cotopaxi. (Ecuadorpostales/Shutterstock)
Destinations

Don't just pass through on your way to the Galapagos
By Fred J. Eckert

So many foreign visitors who arrive in Ecuador spend next to no time in continental Ecuador, often merely overnighting between flights in its capital city of Quito. This is because their main destination is its Galapagos Islands, 836 miles from Quito, 563 miles from the coast of Ecuador west out in the Pacific Ocean.

Big mistake. Sure, the Galapagos Islands are a top bucket-list destination, but it’d be smart to spend some time visiting mainland Ecuador while going to or coming back from the Galapagos and, in fact, Ecuador, even without a visit to the Galapagos, is a great destination in and of itself.

It may be dwarfed by other South American countries as a popular tourist destination, but it offers a fascinating variety of things to see and do—which is why I’ve visited four times.

One experience I’ll never forget is riding a narrow-gauge track train—thus able to pass through places that would be impossible for normal-sized trains and tracks—winding our way up, through, over, and down ranges of the remote and expansive Ecuadorian Andes mountains far south of Quito.

It was exhilarating. Cruising along at an altitude of more than 12,000 feet, feeling as if I was taking a ride on top of the world, often seeing clouds while I was looking down. No wonder that National Geographic’s television special, “Love Those Trains,” raved about this journey as one of the world’s best train trip adventures.

Another highlight is the shopping. For anyone who enjoys the fun of buying quality goods at incredible bargain prices, Ecuador is a paradise. The artistic talent and superb craftsmanship of the people of Ecuador are world-renowned.

At a shop in the remote town of Guano, I once spotted a blanket that I liked, but our Ecuadorian tour guide shook her head and advised me, “Wait until we visit Otavalo.” Sure enough, a few days later at the famous Indian market in Otavalo, I purchased two wonderful blankets at a price almost too good to be true, just as she had suggested I would.

Blankets made by Ecuadorian Indians have got to be the warmest and most comfortable in the world. I’ve accumulated a supply after four visits, and on cold winter nights, I love pulling one over me because I swear that as I do so a warmth falls over me.

The market at Otavalo, in the northern highlands about a two-hour drive from Quito, is second only to the Galapagos Islands as Ecuador’s best-known tourist attraction. It’s huge—about three blocks wide and 12 blocks long. For at least a couple of thousand years, it has been a gathering place for Andes Indians to come together and sell livestock, food, clothing, tools, and just about anything else. Today, with one notable exception, it remains very much as it has always been.

That notable exception is the presence of tourists and the vast amount of handicrafts that draw them here—sweaters, woven rugs, blankets, paintings, bags, wall hangings, jewelry, shirts, ponchos, embroidered blouses, leather coats, purses, belts, and such other items as Panama hats, which originated in Ecuador, not Panama, and get their name from their popularity among people who were working on the construction of the Panama Canal.

It’s worth visiting just to experience its colorful atmosphere, and the hustle and bustle. The Otavaleño Indians in their picturesque traditional dress—the pigtailed men in their blue or gray ponchos, white pants, and wide-brimmed hats; the women decked out in white embroidered shirts tucked into long black skirts, bright-colored shawls draped over their shoulders, wearing black headbands and strands of beads or gold jewelry wrapped around their necks.

The ride up from Quito is scenic and stops at the equator. Ecuador is one of only a couple of places in the world where you can see snow-capped mountains from the equator. Another is Kenya, just north of Nairobi.

So Many Great Shopping Opportunities

On the way back to Quito, I’ve made three other stops for still more great shopping opportunities. In Peguche, a weaving village, I’ve watched skilled craftsmen weave sweaters of baby Alpaca wool and purchased some for myself and for Christmas gifts at prices that are but a fraction of what they’d be back home in the United States. Only in Bolivia have I ever seen them so bargain priced.

The small village of Cotacachi has more than 100 shops devoted exclusively to leather goods. I was stunned by both the quality and the bargain prices. Cotacachi replaced Florence, Italy, as my favorite place to buy leather.

And in Calderon, for loose change, I’ve picked up some of the handicrafts it is famous for—Christmas ornaments and animal and other figures made from bread dough that has been hardened, painted, and glazed.

Many Ecuadorian towns specialize in a particular handicraft. For example, the best place to buy Panama hats is Cuenca, which is known for its Spanish colonial ambiance—ironwork balconies, lovely plazas, cobbled stone streets—and which I view as Ecuador’s most attractive town.

Chordeleg, near Cuenca, is the jewelry capital of Ecuador. Intricate filigree jewelry is a local specialty. Nearby San Bartolome specializes in guitars. Many of the Yamaha guitars you see in Japan are made there.

Incidentally, also not far from Cuenca is Ingapirca, Ecuador’s best and most famous Incan archaeological site. While it doesn’t rival the Incan sites of Peru, it’s impressive and well worth a visit.

The best place to go to buy tagua nut souvenirs—usually figurines and jewelry—is Riobamba. This is a unique Ecuadorian product that is becoming a favorite with tourists. The tagua nut, from a palm that grows in the Ecuadorian rainforests, is soft at first but soon hardens and when hardened is easily mistaken for ivory. The growing popularity of tagua nut souvenirs serves two important environmental purposes—providing an economic incentive for preserving intact rainforests while simultaneously reducing demand for ivory.

On a clear day, and most are, the long drive from Quito to Riobamba on the section of the Pan American Highway known as the “Avenue of the Volcanoes” takes in some beautiful views that include the striking, symmetrical cone that is Cotopaxi, the 19,347-foot-high volcanic mountain that is such an imposing backdrop to Quito, and massive Chimborazo, at 20,823 feet Ecuador’s highest mountain whose top, because of the bulge at the equator area, is the point farthest from the center of the Earth.

In Quito, many shops offer goods from throughout the country. Its upscale shops offer clothing, crafts, and jewelry of unmatched quality from the country’s finest artisans, very expensive by Ecuador standards but quite reasonably priced by U.S. standards.

If a delightful train journey and some incredible shopping bargains are the top two highlights of my visits to Ecuador, the third highlight has to be something that I saw in Quito.

A city of great contrasts—colonial and contemporary, rich and poor—Quito, South America’s oldest capital, offers many interesting things to see, its very setting being one of them. At an altitude of 9,405 feet—about 1 3/4 miles—this city of 1.5 million is the second-highest capital city in the world, after La Paz, Bolivia.

Its religious architecture and artistic works are world-class treasures, which is why Quito has been designated a UNESCO World Heritage Site. In San Francisco Church, the oldest large church in South America, my mouth dropped in utter amazement the first time I looked at all the gold covering the walls and ceilings, even the columns. Never had I seen anything so ornate.

Until, that is, an hour later when I visited another Quito church, one which took 163 years to complete—La Compania, whose altar alone contains 1 1/2 tons of gold!

To these and other impressive must-see things in the capital city, the wise visitor will add a performance of Quito’s Ecuadorian Folklore Ballet, Jacchigua, celebrating the folklore of the Indians of the Ecuadorian Andes.

It’s easily one of the finest cultural shows in the world. It’s dazzling—a two-hour riveting performance by a cast of 60, each one dressed in stunningly colorful outfits that meticulously recreate traditional Andes Indian dyes, textures, and designs. The choreography is perfect. The music is extraordinary and the colors are spectacular.

Listening to the marvelous music of the Andes while watching such magnificent colors prancing across the stage delights the eye and uplifts the soul. Yet it’s just one of many things that always makes me feel happy that I visited Ecuador.

When to Go: Because of the combination of its equator location and high altitudes, the temperature in most parts of Ecuador tends to be spring-like year-round. The best time to visit Quito and Andes Mountains areas is June through December; the rest of the year is pretty good, too, although with a strong likelihood of late afternoon and evening downpours. Along the coast, December through April are rainy. In the eastern rainforest area, the rainy season is, of course, year-round, with March through October seeing the heaviest rainfall.

Recommendation: Using a tour company rather than attempting independent travel is the wise choice for visiting Ecuador. It’s a difficult destination to do on your own.

Caution: In Ecuador, you will be at extremely high altitudes in most places you go. It takes a couple of days to acclimate. You may experience headaches for a while after you arrive. Take care not to unduly exert yourself. A doctor can prescribe medication to make the altitude adjustment easier, but I found that simply using common sense is sufficient and noticed that travelers on altitude medication had no edge over me.

Costs: Ecuador is an exceptionally inexpensive country to visit. Accommodations, food, and entertainment costs are all very reasonable. It’s also one of the best places in the world to shop for high-quality, bargain-priced leather and textile goods.

Food and Drink: Ecuadorian cuisine varies from region to region and is uniformly quite good. The Ecuadorian custom is to provide you with a hot sauce side dish to let you regulate just how hot or spicy you wish your meal to be. Meat is good and seafood, especially sea bass, is exceptionally good. Potato dishes are very popular. Few places in the world can match Ecuador’s wide variety of tasty fruit dishes. Be sure to try a glass of naranjilla, a unique fruit that is a cross between an orange and a peach. Drink only bottled water, even in Quito.

Safety: Petty theft is a serious problem. Using a safety pouch to protect money and other valuables is highly recommended. Alertness and caution are very much in order. Don’t wander out in cities alone at night. Even in broad daylight, theft is a very serious concern in the cities and in the markets. Guard camera equipment carefully.

Fred J. Eckert is a retired U.S. ambassador and former member of Congress. His writings have appeared in many leading publications, including Reader’s Digest and The Wall Street Journal. He is also an award-winning photographer whose collection of images spans all seven continents. See his work at EckertGallery.com.