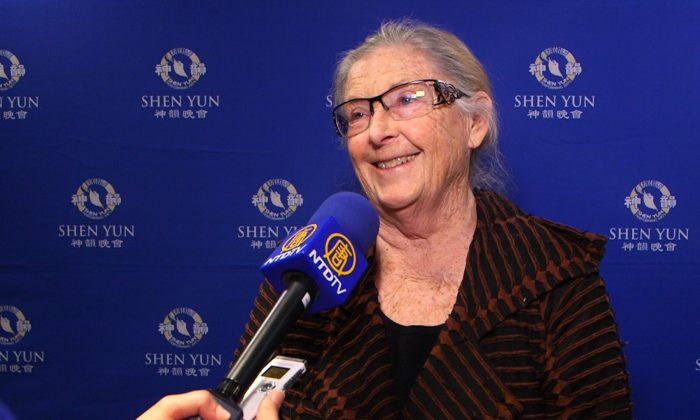 SAN DIEGO—Dr. Carol Frances has had a distinguished career as a nationally recognized economist. She served as chief economist for the American Council on Education, which represents colleges and universities to the executive and legislative branches of the federal government, and she presents her findings on finance in education nationally and internationally.

Dr. Frances watched Shen Yun Performing Arts on March 25 at the San Diego Civic Theatre for the second time, and again she was struck by its beauty.

Shen Yun is a New York-based classical Chinese dance and music company that travels to some 100 cities in 20 countries and five continents each year, inspiring millions as it seeks to revive the beauty of traditional Chinese culture.

I love the way the stories, the legends, are presented each year.
— Dr. Carol Frances

Dr. Frances enjoyed all aspects of the performance.

“I love the way the stories, the legends, are presented each year, and I love the history,” she said. “The diaphanous silk—the costumes are breathtaking, just exquisite. The backdrop of the pictures of the Chinese landscape, and then the way they use the technology to show the dancers ascending to the moon or to a palace in the sky, and then coming up on the stage—it’s perfectly timed. It’s just magnificent, absolutely magnificent,” she said.

A Shen Yun production includes approximately 20 vignettes that serve as windows into traditional Chinese culture. Legends come to life, heavenly realms are revealed, and brilliantly colored costumes are displayed throughout. A live orchestra accompanies the dances, and a massive, digitally animated backdrop sets each scene and makes audience members feel as if they are actually witnessing history.

The performance also includes vocal and instrumental soloists. Dr. Frances was mesmerized by the erhu, a 4,000-year-old, two stringed instrument that is incredibly expressive and can convey a wide range of emotions.

“[The] erhu, that’s magical. It’s absolutely beautiful, and it’s astonishing how much music can be created with these two strings. That’s just amazing,” she said.

Shen Yun’s website explains that the erhu is “eminently suitable for conveying the grand pageant of China’s history and the emotions of its people.”

In addition to the tangible beauty if Shen Yun, Dr. Frances said she loved the thought-provoking messages presented in the songs and a few of the dances set in more contemporary times.

“Freedom, freedom of religion, freedom of expression—I think those things need to be understood,” she said.

Dr. Frances appears to be hooked on Shen Yun: “I will go to great lengths to make sure that I see the performance every year—each and every year,” she said.