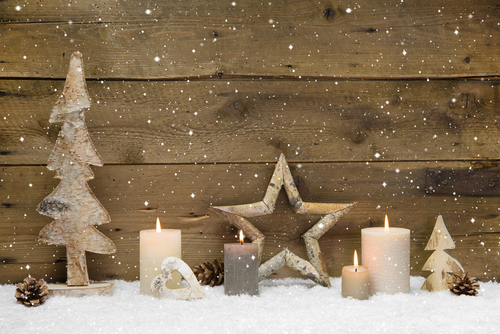 1. Use well-supervised candles instead of lights

Image of a candle via Shutterstock

If you’re having a gathering, use candles to create a warm atmosphere while saving energy.

When choosing candles make the green choice and go for the ones made without paraffin (a byproduct of petroleum) or soot and without wicks containing lead or zinc.

A U.S. Environmental Protection Agency study showed that burning candles containing these substances indoors can pollute the air in your home beyond recommended thresholds for human health.

Get candles instead that are non-toxic, smoke-free, and non-allergenic. Some are made of soy wax, others vegetable or beeswax.

Candle Lite and Madison Avenue carry such candles, for example.

Mistletoe is also known as the vampire plant, because it grows on host trees.

A holiday favorite for creating kissable moments, 20 varieties are endangered. There are, however, over 1,300 varieties. Only two are native to the United States. The American mistletoe is the one to look for. But don’t try eating it, because it’s toxic.

Here’s a how-to video on making ornaments out of old holiday cards.

If you have a gas fireplace and want to give your guests a really thrilling experience, use fire glass.

Fire glass is formed out of glass crystals that don’t give off any toxins. It’s installed in your gas fireplace to preserve the heat. It doesn’t burn, it produces more heat than wood, it is fragrance-free, it doesn’t produce any ash or smoke—and the best part is it looks like magic.

*Image of holiday decorations via Shutterstock