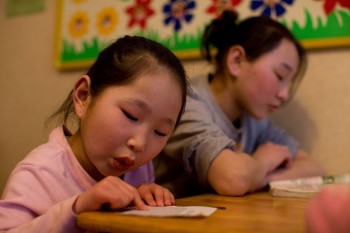 CARE & SUPPORT: Whether you encourage the child with positive acceptance or challenging pushes, always let the child know someone is paying attention and cares. (Paula Bronstein/Getty Images)
People

Eastern Versus Western Approach to Parenting

BY Diana Mathias
TIMEOctober 1, 2015
A mother and child slowly cross the ravine. Gusts of wind blow and mist slickens the rocky path. The child impatiently tries to push ahead, nearly falls, and in a panic, returns to her place behind her mother. The tortuous path turns, rises, and falls, while steep drops threaten on either side. What could be calling them across the ravine? What are they inching towards?

At the end of the path lies admission to a top-level university in the United States. Ahead is the chance to earn a respected degree, and accompanying it, entry into a successful career.

Getting into college can indeed be daunting, perilous, and threatening to a child’s future. They are under huge pressure, and there are uncertain paths and pitfalls at every turn. Some parents are unfamiliar with the American academic culture. One thing that is certain is that most parents will do all they can to help their child have a successful future.

Differences of Each Approach

In parenting, there is a sharp contrast between the Eastern/Chinese and the Western/American way, and many opinions are offered about which to follow. Although one way is typically Chinese and the other is typically American, there are parents of both cultures who use each way, so there isn’t a clear-cut ethnic distinction.

The Eastern approach as described by some parents is very demanding. It involves challenging children by telling them they aren’t good enough, that they’re not working hard enough. Many of us have heard of the Tiger Mom (or Dad) approach, and its success in creating outstanding students.

Some students appreciate this approach. As they look back, they say they excelled because they worked harder when their parents told them they were deficient, and that they wouldn't have done as well if not under such pressure. Many children appreciate their parents’ demand for high performance and the great successes they were able to achieve as a result.

The Western approach, by contrast, is to avoid criticizing children, protecting their self-esteem, and encouraging them with praise. This approach also works well. Some Chinese people, for example, have excelled tremendously and did so without a negative, encumbering atmosphere at home.

Accepting children as they are, with all their faults, is often seen as a prime Western-style example of a parent’s love, and we hear of students who rise to great heights on the strength of their parents’ belief that they are capable of great things. Conversely, there are adults who look back and say they wish their parents had pushed them more. They say they would have worked harder and accomplished more if their parents had required it.

There are also adults who reject the pushing approach. Bitter fights can erupt between parents and children as they struggle to meet each of their needs and aspirations in opposing directions—the parent pushing the child to succeed; the child pushing the parent to accept them as they are.

These two very different methods do have something in common. They both demonstrate a belief in the child’s abilities, and they envision future attainment with high goals. Without this vital ingredient, the child often fails.

Requirements of Each Approach

What can you do as a parent? For the demanding Eastern approach, you must have a firm resolve that your child will work hard, stick to a schedule, and forego amusements and socializing. You’ll need to set their alarm. You’ll want to find the very best teachers who share your philosophy. Always remember, you know the student can do it! There’s no excuse not to keep to the schedule and meet every deadline. You must be very firm!

Alternatively, with the praising Western approach, you can first investigate the schools and extra-curricular options available, and then encourage your child to try what interests him most. Reassure your child that he’ll be able to master anything he puts his mind to. Allow your child to create and follow his own work and play schedule.

As a praising Western-style parent, you will constantly look for things your child does well and compliment those things. Gather a list of the child’s accomplishments you can praise. Turn your outlook into a positive-radar view, seeking a positive twist for any event—always look for the silver lining. If this isn’t in your nature, you must work at changing your perspective. Take suggestions from more upbeat friends and family members.

Which Approach is Best?

Can pushing a child bring out her true self, or will it suppress who she really is? Will praising the child keep her in her current mediocre state, or can it cheer her on to heights she wouldn’t have otherwise achieved? It depends on the student.

The solution is not that one way is better than the other, it is to know your child and what he will respond to. Your child might be one who needs more structure and more of a push, or one who needs acceptance and a gentle voice. Since the results can be either high success or extreme failure, it is worth a good deal of listening and introspection to find the right path to help your child succeed.

Whichever method you use, it’s important to believe in your child’s abilities. You should always hold high expectations, whether you encourage the child with positive acceptance or challenging pushes. Always let him know that someone is paying attention and cares. The final result will be the joy of accomplishment shining from the student’s heart as he reaches the pinnacle of his success.