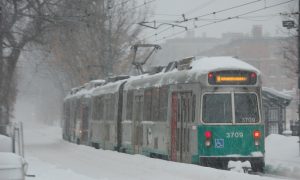 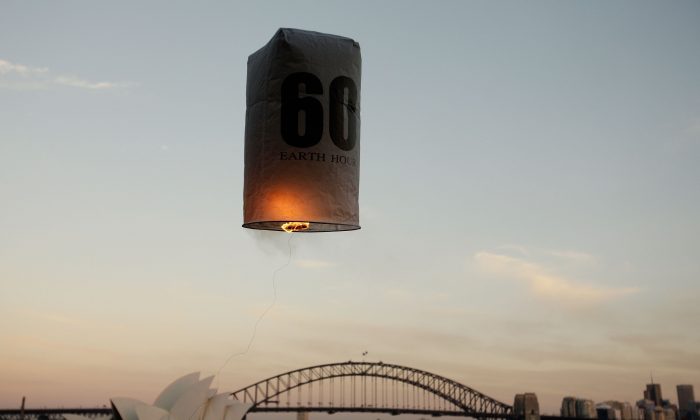 Seven lanterns representing the seven continents of the world are released over Sydney Harbour, in a countdown to Earth Hour in 2010, in Sydney, Australia. Earth Hour 2015 is focused on the impact of global warming on rural communities and food production this year. (Brendon Thorne/Getty Images for WWF
Australia

Earth Hour Returns in 2015 With Focus on Food Production

SYDNEY—It’s Earth Hour time again and there are new activities planned for 2015’s lights out night—a pop-up paddock dinner in the country perhaps, or for the more energetic, an inner city No Lights No Lycra dance party.

Earth Hour 2015 is focused on the impact of global warming on rural communities and food production this year, and the response has been “overwhelming”, say organisers.

“We’ve had to bring in 20 extra volunteers just to deal with the number of people keen to help and wanting Earth Hour materials,” said Anna Rose, national manager of Earth Hour Australia and Australian Geographic Society Conservationist of the Year.

It is a really important issue if we want to be a country that continues to grow healthy, safe fresh food for future generations.
— Anna Rose, Earth Hour National Manager
One-in-three Australians already participates in Earth Hour, but Ms Rose believes the increased interest shows a growing awareness in the community about climate change.

“That community demand for our political leaders from all parties to take climate change more seriously and to remind them that it is a priority issue for Australians,” she said in a phone interview.

Part of the interest is also this year’s focus on food production and security.

Climate change has shifted the cycle of life.
— Marian MacDonald, dairy farmer South Gippsland
Farmers produce 93 per cent of the food we eat in Australia, but they are “on the front line of global warning”, Ms Rose said. “Fundamentally rising temperatures and more extreme weather are affecting the food that we eat for breakfast, lunch and dinner. It’s a story that hasn’t been told very much in Australia”.

“It’s partly because Earth Hour always occurs at 8.30pm on a Saturday night when a lot of people are eating out,” Ms Rose said, but the support is also because chefs are already affected by climate change either by growing their own food or through their connection to farmers.

Organised by the World Wildlife Fund, Earth Hour began in Sydney in 2007 as a one off lights-off event to raise awareness of climate change. It is now annual and ranges across the world’s 24 time zones, incorporating 162 countries and over 7000 cities and towns including London, New York, Paris and Tokyo.

“It’s a beautiful story that shows you the power of an idea when you can mobilise the community behind it,” said Ms Rose.

This year each country is focusing in their own way on the impact of climate change. Earth Hour UK, for example, is highlighting the stories of individuals’ actions to protect the environment under the banner Superheroes for the Planet and the other week Andy Murray, the tennis player, was announced as the new UK Earth Hour Ambassador.

There is also the Earth Hour City Challenge where cities around the world have set targets to incorporate renewable energy and prepare for extreme weather conditions.

In Australia, for the first time this year, Earth Hour is presenting a special school program. Thousands of schools around Australia will participate in an Earth Hour Schools Day on Friday March 27, with information and activities to take home to parents too.

A co-founder of the Australian Youth Climate Coalition (AYCC) and a former Environment Minister’s joint Young Environmentalist of the Year, Ms Rose believes Earth Hour is an important grass roots event because it allows people and communities to participate in collective action on climate change in their own unique way.

“The thing that I really love about Earth Hour is the message that no one can do everything but everyone can do something,” she said.

The Earth Hour cookbook, Planet to Plate, was a new initiative for 2015 to bring more attention to how Australia’s chefs and farmers are connected in adapting to climate change.

“They know it is already affecting the produce they use to cook with,” Ms Rose said.

The cookbook also includes stories from 55 farmers and their insights are revealing.

“The farmers I talk to here have gone way beyond debating whether climate change is real,” says dairy farmer Marian MacDonald from South Gippsland in Victoria. “We’re all getting on with adapting.”

The combination of less rain and warmer temperatures has changed the way she feeds the cows and even the time of year that calves are born.

“Climate change has shifted the cycle of life,” she says in the book.

The farmers highlight the sorts of challenges they face including new planting and cropping seasons, bio-security threats from new weeds and pests, and extreme weather events.

“It is a really important issue if we want to be a country that continues to grow healthy, safe fresh food for future generations,” said Ms Rose.

Earth Hour has made a documentary of the farmer’s stories which will feature in pop-up venues across Australia, from tiny rural towns to the cities where it will be screened before No Lights No Lycra dance parties.

Farmers in some rural areas are also opening their properties to local communities for candle-lit dinners and a number of breweries are launching a new beer.

“They are even brewing a special brew called Drought Draught to remind people that beer is also threatened along with our food,” Ms Rose said.