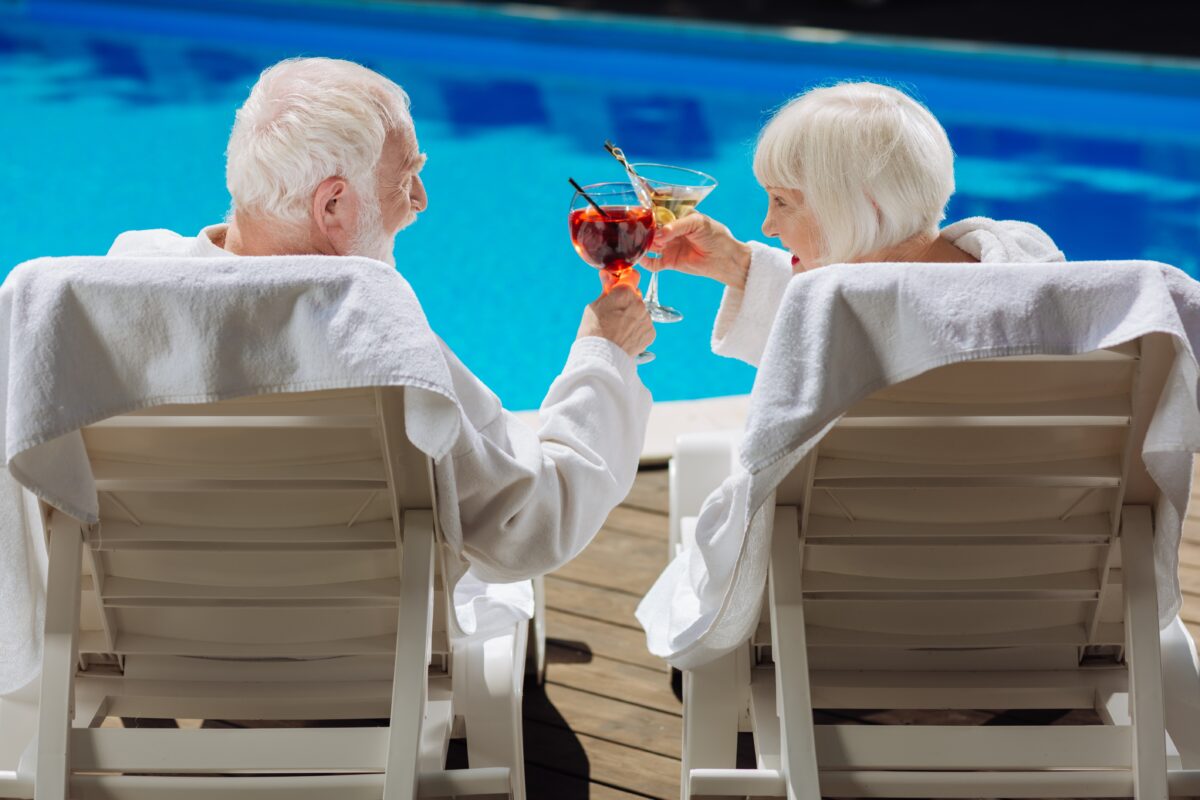 Early Retirement Will Bankrupt Your Dreams, Here’s Why

While there are certainly exceptions, who wouldn’t want to retire early? Instead of being a part of the 9-to-5 grind, you could spend more with family, friends, or leisure activities that you haven’t had time for. Or, maybe you could finally travel or pursue a money-making side hustle.

Well, unless you have more than enough money in the bank or multiple income sources, there are a lot of financial risks involved with early retirement. In fact, early retirement may even bankrupt your dreams.

Retirement will Likely Last Longer Than you Think

In spite of your desire to walk away from work, your new life away from work will bring new challenges. For example, one in seven people age 65 right now will live to be 95, while one in three people will live to be 90, according to the Social Security Administration. In an era when life expectancies are rising so rapidly, it is likely you will outlive your savings even if you only save enough to live through the “average” retirement.

Moreover, more than two-thirds of retirees responding to an ING survey said they had a lower standard of living than they did while working. So, with the exception of a large inheritance or winning the lottery, retiring early is going to be a challenge—especially when you’re cutting your long-term savings short.

As if that weren’t bad enough, you’re missing out on IRS catch-ups. Those over 50 can make annual catch-up contributions if they turn 50 before the end of the calendar year on retirement accounts like 401(k)s and IRAs.

But, what about retirement vehicles like an annuity? While it’s true that an annuity can provide a guaranteed lifetime income, you shouldn’t consider this until you’re maxed out other retirement savings. If not, your annuity payments may not be enough to cover your essential expenses.

And, with most annuities, you can’t access these funds until you are over the age of 59 ½. If you do so earlier, you’ll face a surrender fee, as well as a 10 percent early withdrawal penalty from Uncle Sam.

Social Security is Nothing to Write Home About

“Social Security’s average benefit—$18,000 per year—could be far higher, but 94 percent of retirees take Social Security retirement benefits well before its benefit peaks, at age 70,” says Laurence J. Kotlikoff, an economics professor and the author of “Money Magic: An Economist’s Secrets to More Money, Less Risk, and a Better Life.”

“In fact, roughly 85 percent should be waiting until 70 to collect. The age-70 retirement benefit is 76 percent higher, adjusted for inflation, than, for example, the age-62 benefit.”

“Moreover, when Americans take their Social Security retirement benefits far too early, they potentially condemn their spouses or ex-spouses (to whom they were married for a decade or more) to far lower widow(er)‘s and divorced widow(er)’s benefits,” he adds.

You Sacrifice the Power of Compounding Interest

“Time is your friend when you are saving for retirement, but not when you are spending,” notes John Waggoner for the AARP. If you sock away $250 a month—$3,000 a year—from age 25 to age 55, you’ll have about $237,000 when you retire, assuming you make no withdrawals and earn an average of 6 percent annually on your assets.” That’s a fairly decent return for your $90,000 contribution.

Having comprehensive health insurance coverage is essential to maintaining your health. Why? Aging is accompanied by aches, pains, and an increased risk of illness. Unless you’re 65 or older, you’re not eligible for Medicare if you retire early.

Under COBRA, continuing coverage through your employer is an option. But, in most cases, for only 18 months. Usually, when you retire, your employer typically stops paying a portion of your premiums. Suffice to say, this could be very expensive.

However, you may also be eligible for subsidies through the Affordable Care Care if you choose to purchase an individual policy.

Did you know that the average American has $90,460 in debt? Consumer debt includes everything from credit cards to personal loans, mortgages, and student loans.

Here are the average debt balances by age group;

It doesn’t matter how much money you have in savings and investments, if you still have debt you shouldn’t retire.

“Managing cash flow is the cornerstone of a retirement plan because retirees typically live on a fixed income,” Robert Westley, a certified public accountant, and financial planner told AARP. “Routinely, retirement income is lower than pre-retirement income, and therefore debt repayments that were once manageable preretirement begin to consume a proportionately larger share of income.”

As long as you receive a paycheck, you’re financially flexible. After all, having a recurring income helps you to recover from unwise spending decisions. In addition, you can usually expect annual raises or bonuses to compensate for any major financial mistakes or handling the unexpected.

Having a fixed income makes overcoming spending errors or emergencies more difficult. Moreover, you will lose long-term income if you withdraw from your invested savings to take a luxurious vacation.

Similarly, your financial goals may change in the future and you may not be able to adapt. As an example, you may not have the funds for new and exciting financial opportunities like starting your own business or investing in your nephew’s start-up.

The Amount of Money You Have Saved is Probably Insufficient

It’s still likely that you would not have enough money even if you knew for certain that the average retirement length applied to you. And, according to CNBC, common retirement tips such as saving 10 times, your salary can often overlook important factors. These include outstanding debt, stagnant wages, and rising costs of living.

You’ll Spend More Than You Think

“A typical rule of thumb is that you’ll spend about 80 percent as much in retirement as you do when you work,” states Waggoner. “After all, you won’t be shoveling money into your retirement account, commuting every day, and, for that matter, paying Social Security payroll tax, assuming you have no more earned income.”

However, you may even be able to spend more in the early years of retirement, when you’re younger, healthier, and no longer constrained by work obligations. There is usually a surge in new retiree spending on travel, home renovations, relocation, and other retirement-related lifestyle changes after two or three years, according to a study by J.P. Morgan Asset Management.

“Every day is Saturday,” says Sean Pearson, a certified financial planner in Conshohocken, Pennsylvania. “Once you don’t work, you wake up and look for things to do—basically, how we all feel on Saturday. Some things might be fun and social. Some things might be working around the house. Most things cost some money, which is why Saturday is often the most expensive day of your week.”

It can be hard to fill your time in the absence of structured activities provided by work. Despite the many plans you may have, not everyone does well without the built-in activities and social interactions provided by the workplace.

In addition, boredom could have a negative effect on both your mental and physical health. Furthermore, you may end up overspending to entertain yourself. As a result, this reduces the likelihood that you will be able to stretch out your retirement savings.

In a paper from the University of Michigan, researchers found that older Americans are even more vulnerable to market downturns, such as the 2008 recession, which are cyclical and inevitable. Sadly, even if the next crash isn’t as severe as the Great Recession, it could rob you of your retirement savings without warning, as it did for millions starting in 2008.

In contrast, younger workers have time to weather the storm and wait for the rebound – whereas older workers cannot. Meanwhile, budget-strapped retirees may struggle.

If You Want to Reenter the Workforce, It May Be Too Late

An Ipsos/Reuters poll found that nearly a third of retirees would return to the workforce if they were able. The problem? That might not an option.

The Harvard Business Review reports that re-entering the workforce after a hiatus is often much more difficult for older Americans, especially women. Additionally, 78 percent of older workers report seeing or experiencing age discrimination at work.

So, even if you decided that early retirement was a mistake, there’s a good chance that you can’t reverse course.

In addition to financial concerns, your health and well-being may be at risk if you don’t work. BBC News reports that early retirees are more likely to suffer from mental and physical ailments than those who extend their years in the workforce. Retirees are 40 percent more likely to suffer from depression. The number of diagnosed physical ailments rises by 60 percent among retirees.

Suffice to say, that means you may have even higher medical bills on a very limited retirement budget.

But, wait. It gets worse.

The Longest life expectancy is among those working past 65. Even when lifestyle, health, and demographic factors are considered, studies show that working just one year beyond 65 dramatically reduces the risk of death from all causes.

However, there is a wide range of factors at play, including the fact that some people began to retire early because their health was already too fragile to work. However, Bloomberg summarized the correlation between early retirement and early death as “striking” when citing another study.”

The amount can be adjusted based on other sources of income, including Social Security, pensions, and part-time work, as well as health issues and lifestyle preferences. For instance, if you plan on traveling extensively during retirement, you may need more than that.

2. Do I have a well-defined budget?

If you want to retire early, then you must calculate your monthly expenses instead of guessing. When you know how much money you need, you can decide if your savings will last you through a longer retirement than expected.

3. How will my Social Security benefits be affected?

It is possible to begin receiving Social Security retirement benefits as early as 62, but your benefits may be reduced by 30 percent. Depending on your birth date, you can receive benefits from the Social Security system before reaching full retirement age, which can range from 65 to 67.

4. Will I still have health insurance?

In the interim, before Medicare takes effect, you should find out if your employer offers a health insurance program or if you will need a private health plan.

5. Should I retire early?

You are the only person who can answer that. Advisors can explore a variety of what-if scenarios, however, to help workers determine the optimal retirement age. By examining income sources, spending habits, expected inflation, and life expectancy one can determine whether early retirement could result in a financial shortfall down the road.