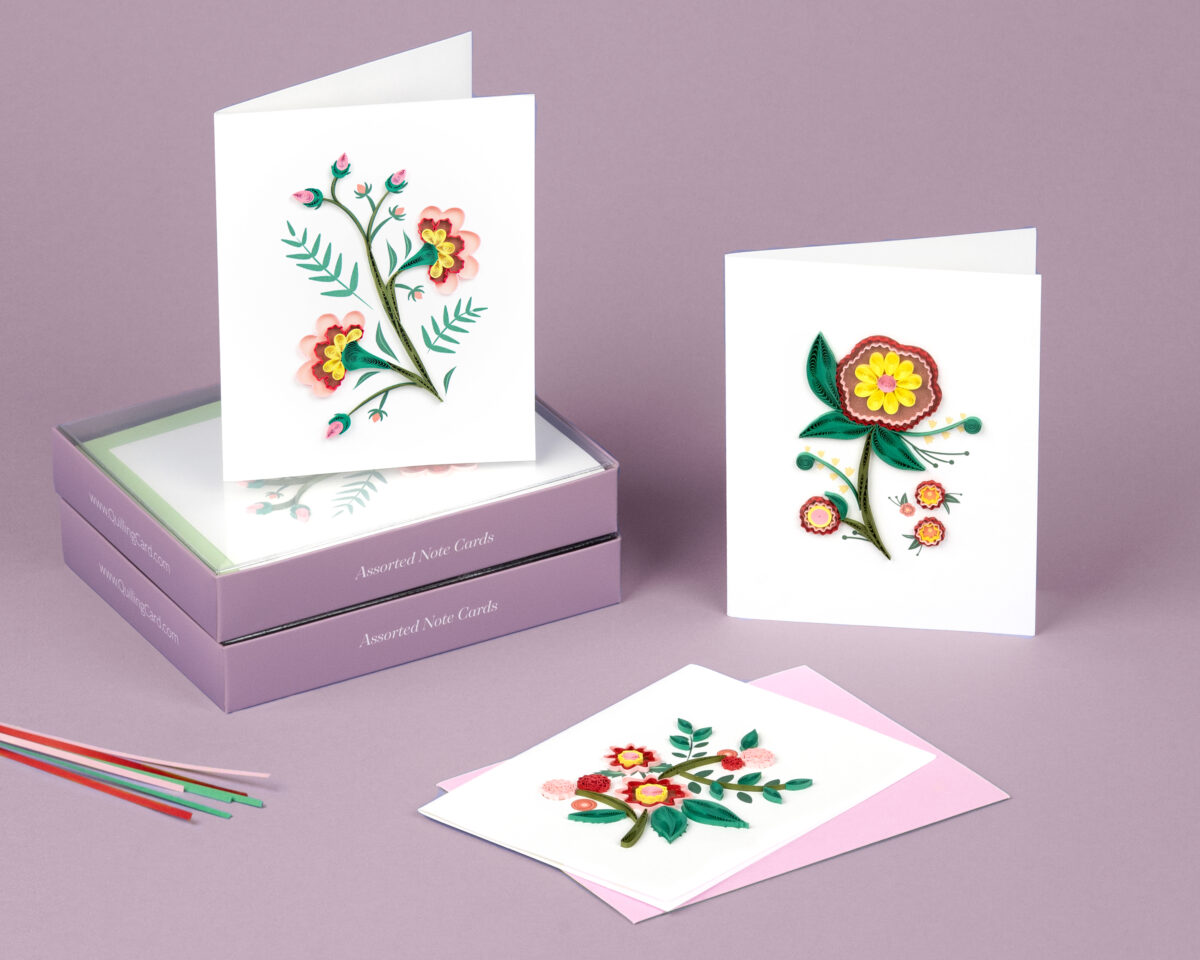 Huong Wolf and her husband, an entrepreneurial duo, started Quilling Card to share the beauty of quilling with the world
BY Hazel Atkins TIMESeptember 2, 2022 PRINT

Strips of millimeter-thin colored paper coiled, shaped, and glued into precise and gorgeous designs by hand: This is quilling, a simple, yet ancient, art that “anyone can learn,” according to Huong Wolf, co-founder of Quilling Card in Massachusetts.

In April 2022, Quilling Card earned two Guinness World Record titles: one for the most people quilling simultaneously, and one for the largest quilled mosaic in the world. It is the first company to market quilling in the form of greeting cards. They are based in Massachusetts and their quilling factories are in Vietnam.

“Since our cards are made in Vietnam, many people think that quilling is an Asian art,” Wolf said. But in fact, quilling can be traced to the ancient Egyptians, who used feather quills to coil incredibly fine strips of gold into intricate filigree adornments for religious objects.

“Later, in Renaissance Europe, paper was used as a less expensive option for religious objects in monasteries and churches,” explained Wolf. Quilling went in and out of fashion, never quite dying out completely, and in 19th-century Europe, it was picked up as a pastime by ladies of the nobility as an alternative to embroidery or sewing.

Now, Quilling Card sends love, art, and memories through the mail in quilled greeting cards that many recipients frame and treasure for years.

“One thing our cards do for people is reconnect [them],” said Wolf. “A lot of people will say, ‘Oh, I sent one to my step-mom, and we never talk because of whatever family issue, but she picked up the phone and called me to thank me for the most beautiful card.’ It not only connects them, but also mends their relationship.”

Faith in an Idea

Quilling Card came into being purely by chance. Ten years ago, Wolf was living in Vietnam while her husband lived in Massachusetts. He was asked by a friend to go and look at a quilling factory in Vietnam that was for sale. Involved in textiles, her husband thought the factory was for quilting. When he went to the factory, he was intrigued by the intricate art of quilling and immediately saw its potential as a business venture.

After realizing their own passion for the art of quilling, Wolf and her husband wanted to find a way to bring more attention to it, and thought that greeting cards would be the perfect vessel for placing quilling in the homes of people all over. They formulated the idea for their company while Wolf was still living in Vietnam.

Before then, Wolf hadn’t tried quilling herself. She subsequently taught herself using YouTube videos and trial and error. “I have to tell you that I’m not the best hand in the house!” she said with a laugh.

In 2012, Wolf moved from Vietnam to Massachusetts. They launched the company at the National Stationery Show in New York to overwhelmingly positive feedback.

“As soon as I came back from the stationery show, I sent in my resignation letter,” Wolf recalled. “I still remember my boss’s reaction. He said, ‘Look, the stationery industry is dying. Nobody writes letters anymore. You’re going to start up a greeting card company?’ But my husband and I believed in it, and we believed that people would see and appreciate how beautiful the art of quilling is, so we had to try it.”

The first three years were hard. Wolf went to a lot of shows and always received a positive response, but her cards were expensive and retailers weren’t sure they would sell. The cards were unusual, too, in that they did not have a printed message inside, but rather an insert for the sender to write a personal note. “I can’t sell blank cards,” retailers told her. She worked hard to convince them that when people received a quilled card, they’d realize the labor involved in making it, the beauty of the art, and frame it to keep. Having a hand-written personal message would only increase the card’s value.

Wolf and her husband started by doing business with the quilling factory that had sparked the whole idea, before opening their own in Vietnam. With their successful growth, they now have a total of five.

A Precise and Intricate Art

Quilling is the art of rolling, coiling, and shaping small paper strips to make three-dimensional designs. Traditionally, a feather was used for rolling the paper, but now the tool is like a needle with a split end to slot in the paper. The other tools are tweezers, scissors, and glue: “Those are all the tools you need!” Wolf said.

“Quilling is not difficult. The people we recruit come to us knowing nothing about it,” she said. On their first day, trainees are asked to simply play with the paper, to learn about how it behaves, and to experiment with the tools.

The company buys long sheets of paper, in varying weights, and cuts them very thin. “That is the only machine-work in our whole process, cutting the paper,” Wolf said.

During their first week, new quillers learn what Wolf calls the quilling alphabet. “We have about 50 basic shapes; they have to practice these shapes to perfection,” she explained. “Then they start putting them together to make it a simple design.” One month of training is followed by a two-month probation period.

“If we train 100 people and retain 20 to go into the probation period, it is a huge success,” Wolf said. “Making the shapes is fun, but when you have to put it together, perfect it, and make it a very intricate design, that requires a lot of patience, and most people drop out right there.”

Quilling Card pays its recruits from day one. Usually in Vietnam, “if you want to learn a craft, you have to pay to be taught,” Wolf said. “For us, it’s the other way around—we pay to teach them.”

They’re also dedicated to taking care of their employees. Wolf decided to apply for Fair Trade Certification for the factories in Vietnam, believing that “it was the best thing we could do for our company culture and values.” Most of their quillers are women, and she feels blessed to be able to provide careers to young women from her homeland who might have very little education.

One of their biggest retailers, Hallmark, sponsored Quilling Card for HERproject, an 18-month program that teaches women about abuse, pregnancy and post-partum healthcare, and safe sex. “These subjects are taboo in Vietnam,” said Wolf, “but Hallmark sponsored us to do that training. It gives so much added value to our staff in Vietnam.”

“When we observe our customers,” said Wolf, “we see that they not only look at the cards, but they also touch them. It’s a very tactile thing. This gave us an idea: Why don’t we make cards for the blind?” Quilling Card employs a lot of hearing-impaired women in Vietnam, and Wolf wondered, “What if we employ hearing-impaired women who are very talented with their hands to make cards for the blind that they can read with their hands?”

Once committed to the idea, Wolf and her team quickly discovered that they knew very little about braille, an exact science. So they partnered with a nearby School for the Blind. “It took two years to perfect the braille cards,” she said. “Braille has a very small market, but that didn’t matter for us. We did this out of our passion.”

One day, Wolf witnessed something remarkable: “When we showed our fourth or fifth round of prototypes, one woman was crying. She said, ‘This is such a beautiful blue butterfly.’ I looked at my design and the words jumped out of my mouth: ‘But you’re blind! How do you know it’s blue?’ She said, ‘I don’t see colors, I feel colors. Colors have energy.’ I was amazed. God has taken some senses away but people have been given incredible other senses.”

In all of their work, they’re driven by a desire to bring beauty and goodness into people’s lives.

“Our customers’ appreciation is our motivation,” said Wolf. “I hope we can preserve this beautiful art for, who knows, maybe hundreds of years.”