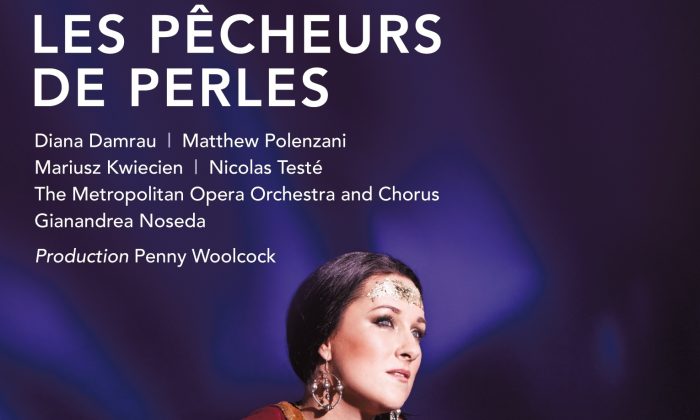 A performance to treasure
By Barry Bassis
biggersmaller
Print

While Bizet’s “Carmen” is one of the world’s most popular operas, “The Pearl Fishers” (“Les Pêcheurs de Perles”) on the other hand, had not until recently been done at the Met since 1916. Erato, a division of Warner Classics, has issued a DVD of the Jan. 16, 2016 Metropolitan Opera production of Georges Bizet’s rarely performed opera.

Director Penny Woolcock is primarily known for tackling provocative modern subjects, such as “Doctor Atomic” (which she directed at the Met) and “The Death of Klinghoffer,” as well as film documentaries about dog fighting and street gangs.

Here Woolcock proves she is equally inspired by an exotic setting (originally Ceylon, now Sri Lanka). As she explains in one of the extras on the DVD, she kept the Far East setting but moved the time period from the ancient era to the present day.

The opera begins magically with the sight of pearl fishers swimming behind a scrim—actually three dancers on wires with video projections. The sea is an omnipresent force throughout.

The plot starts with the reunion of two fishermen, Nadir and Zurga, who had been friends since they were children. Zurga is the leader of the village and Nadir had been away for a year. They had both fallen in love with a Hindu priestess named Leila and vowed to relinquish their romantic inclinations.

According to village beliefs, only a virgin priestess can maintain the calm seas and keep divers safe.  When Leila appears, albeit veiled, Nadir recognizes her and their mutual love is instantly rekindled.

Between acts, there is a projected image of a tsunami. The storm breaks out during the second act, and when high priest Nourabad discovers the lovers, he holds them responsible for the bad weather.

Zurga appears to be sympathetic until he removes Leila’s veil and realizes that Nadir has broken his vow. Zurga struggles with the thought that his former best friend and the woman he loved are about to be sacrificed, so to save them, he sets the village on fire. At the end, Nadir and Leila escape while Zurga remains to face the music.

While the plot doesn’t make much sense, the music more than compensates.

The famous tenor-baritone duet, “Au fond du temple saint” is stirringly performed by Polanzani and Kwiecien, and the tenor delivers an ecstatic rendition of the difficult aria “Je crois entendre encore.” The score also includes a beautiful soprano aria, “Comme autrefois,” and a love duet between Nadir and Leila. Damrau is wonderful, as always.

The chorus as the villagers plays a vital role and is up to their high standards and so is the orchestra under conductor Gianandrea Noseda.

Special credit goes to Woolcock and her superb design team: Kevin Pollard (costumes), 59 Productions (video projections), Jen Schriever (lighting), Dick Bird (set design), and Andrew Dawson (choreography). From the swimming figures at the beginning to the fires in the last scene, the visual effects add to the drama.

The DVD has interesting extras. Patricia Racette (a Met opera star in her own right) is backstage at the Met and speaks to the leads. Damrau reveals that she was the one who suggested the opera to the company. She had performed the work before, but Woolcock gave her and the others a chance to improvise.

Polenzani and Kwiecien are old friends, having appeared together over a 15-year period. They are pleased to follow in the footsteps of the legendary singers in the 1916 production: Enrico Caruso and Giuseppe De Luca. Polenzani had first performed the aria, “Je crois entendre encore,” at an audition when he was 17 years old and blissfully ignorant of its difficulties.

The conductor Gianandrea Noseda was unfamiliar with the opera and had doubts until he started to read the score and discovered it was “full of pearls.”

Also, Racette shows how the dazzling opening was created. Two of the underwater swimmers/acrobats, Scott Weber and Cody Schreger, who are actually dancers, speak of the experience.

Finally, Woolcock explains her interpretation of the opera, which those at the performance or at home watching the DVD will consider a triumph.