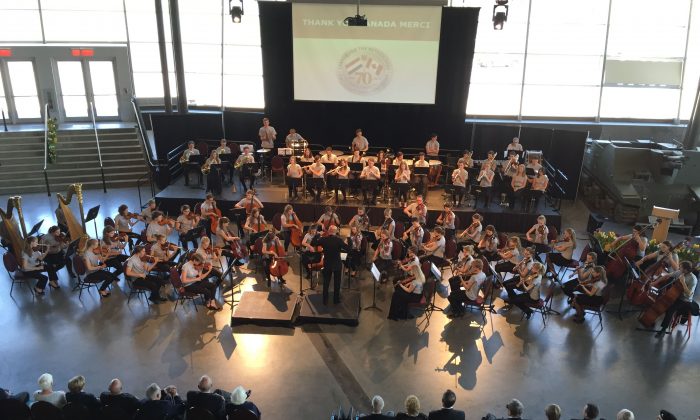 The Youth Orchestra of The Netherlands treated Canadian World War II vets to a very special private concert at the Canadian War Museum on May 7, 2015. (JeugdOrkest Nederland)
Arts & Culture

A distinguished group of men and women who played an active role in World War II were treated to a very special private concert at the Canadian War Museum on May 7.

YON, the Youth Orchestra of The Netherlands, played for the vets in the LeBreton Gallery amidst tanks and other military artifacts, with banks of tulips in and around the musicians.

The tulips not only brightened the gallery but also brought back memories of the wonderful gift of tulips made by the Netherlands to the city of Ottawa after the war. During WWII, Canada provided a refuge for the Dutch royal family. In fact, a royal princess, Margriet, was born in the maternity ward of the Ottawa Civic Hospital.

Violin soloist Laura Lunansky, winner of many scholarships and awards, added a touch of elegance as well as fine musicianship to the performance.

The 45-minute concert, called “A Tribute to Veterans,” was organized by the Netherlands Embassy, the War Museum, Veterans Affairs, and the Canadian Tulip Festival, and included works by Peter van Anrooy, John Williams (Schindler’s List), Berlioz, and Tschaikosky (Waltz of the Flowers).

Violin soloist Laura Lunansky, winner of many scholarships and awards, added a touch of elegance as well as fine musicianship to the performance. The touching tribute ended with a reception for the veterans and their guests and a ceremony in which the musicians presented tulips to the veterans along with a personal message of thanks.

Jurjen Hempel, the renowned Dutch conductor who made his debut at the Radio Philharmonic Orchestra in 1989, led the orchestra. That year marked the beginning of Hempel’s distinguished conducting career. He went on to take part in the famous conductor courses at Tanglewood in 1994, where he studied with Seiji Ozawa, Bernard Haitink, and Lorin Maazel.

Hempel is delighted to be leading YON, an extraordinary orchestra made up of young people aged 14 to 20, some going on to pursue careers as musicians, other enjoying the musical part of their education.

“With the Youth Orchestra of the Netherlands, it’s about the pleasure of bringing together the musical fragments at the beginning to a wonderful concert at the end,” he said.

YON is considered the top orchestra in its age group. It is dedicated to classical works, mostly from the romantic repertoire.