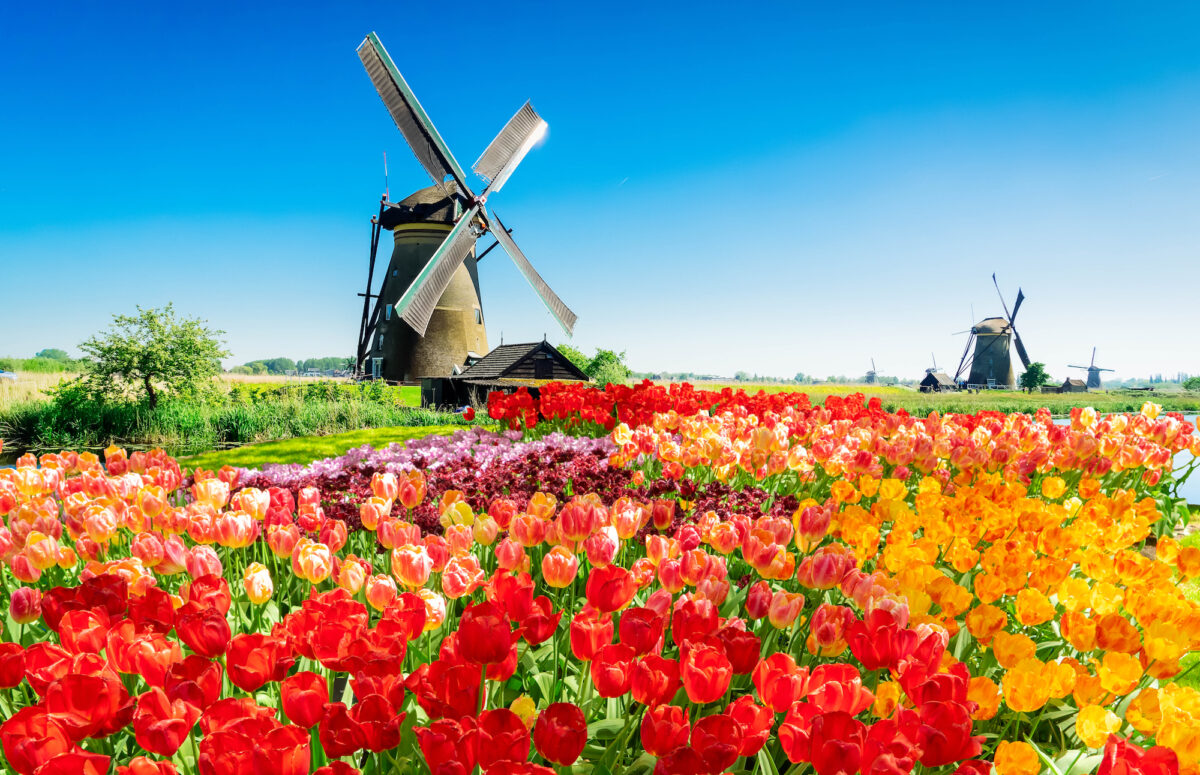 Blooming tulips and windmills in Kinderdijk, the Netherlands. (Neirfy/Shutterstock)
Travel

It’s like a scene out of a storybook. In the fading late afternoon sun, the windmills stood all in a row, as if Don Quixote might just pop out from behind one and commence his tilting.

The actual turning of the blades, though made from wood, is facilitated by fabric flaps, which must be unfurled in the morning, but then buttoned up at the end of the day. A guide notes that people actually still live inside these mills, and that to do so, to even apply for the position of miller (windmill-keeper), you must take years of training, and hold a special certificate.

After touring through one of them, preserved as a museum, I emerged on the other side, and saw him. Not Quixote, but a miller at the next mill, striding out to perform his end-of-day responsibilities. He wore a casual shirt, jeans—and wooden shoes.

As we walked toward him, I asked the guide, “Why?”

“It’s just part of his outfit,” he said. “They love to keep the traditional things. They wear wooden shoes all day long.”

Slowly, meticulously, the miller bundled up the fabric—called sails—and secured the old wooden blades with a brake so they wouldn’t spin all night. Then, with a nod of his head, he was gone, back inside the windmill, a very Dutch day’s work done.

The Netherlands is a place that quickly conjures a whole series of images. Sometimes the things that we assume only reside now in fables—like windmills and wooden shoes—still come alive, today.

As summer heats up and travel to Europe becomes extremely busy, Amsterdam, one of the world’s most popular travel destinations, will again be slammed with visitors. But this tiny country—smaller even than some big, western counties in the United States—offers plenty of fun outside of its largest city. It’s worth it to hop on a train and explore.

For example, Kinderdijk. Just outside Rotterdam, the Netherlands’ second city, this is a popular attraction and a United Nations Educational, Scientific and Cultural Organization (UNESCO) World Heritage Site. It gained the designation in 1997, honored because, in the words of UNESCO, it showcases the “centuries-long battle” of the Dutch to avoid inundation by an encroaching sea, and the invention of a complex system to ensure survival. A total of 19 windmills stand side-by-side in rows, built to pump water so the land could be farmed.

“Why would people live here in the first place?” the guide asked, repeating a question he’s been asked by countless guests.

He noted that, when people first started farming here in the 10th and 11th centuries, the land was above sea level.

“But now, without pumping, within a month—maximum, two—almost half the country would be underwater,” he said.

As we made our way through the snug quarters inside the lighthouse, which provide just enough space for millers to sleep and work, the guide described his idyllic childhood, growing up just in the next village.

“When the canals froze, we skated on them,” he said. “And we set up stands on the ice, with coffee and pea soup.”

One of the best things about traveling in the Netherlands (or Holland, the not-entirely-correct shorthand people often use for this country)—nothing is very far away. A network of very fast, frequent, and fairly inexpensive trains facilitates a trip where you can see a lot in a short amount of time. For example: from Rotterdam, you can reach The Hague in as little as 24 minutes.

The nation’s administrative and royal capital, The Hague, or Den Haag, is famous all over the world for its central role in international jurisprudence, home to the International Criminal Court and the International Court of Justice (the judicial arm of the United Nations). Home to about 800,000 people in its metro area, it’s the country’s third-largest city, and a lovely place.

You can tour the neo-Renaissance Peace Palace, and, inside the Ridderzaal, the famous Hall of Knights. Dating back to 1248, it’s part of the larger, gothic Binnenhof castle complex. It’s here that the Dutch monarch opens Parliament with the annual Speech from the Throne.

Nearby, is the Mauritshuis museum. Though smaller and more low-profile than Amsterdam’s Rijksmuseum, the Mauritshuis is nonetheless a truly excellent place to experience Dutch art. Housed in a lovely 17th-century Dutch Classicist building, you can stroll among works by Rembrandt, Rubens, and Vermeer. It’s home to Vermeer’s “Girl With a Pearl Earring,” one of the best-known works of the Dutch Golden Age. Painted in 1665, in this century the story of the subject was fictionalized into a 2003 novel, which was in turn filmed as a movie and staged as a play.

Just next door to The Hague is the home of another Dutch icon—Delft. Few created items are as evocative and immediately identified with a country as the blue pottery created in this city of just over 100,000.

Often known as Delft Blue, wealthy families would showcase their collections as a point of pride, and at its peak, between the 17th and 19th centuries, a total of 33 factories here produced it. One remains, Royal Delft, and you can still take a deep dive into the history and production process with a factory tour.

And, all across the Netherlands, there’s probably no better place than Delft for a casual stroll. The city is lined with canals, the oldest dating back 750 years—even the city’s name is related to the Dutch word for “dig.” You can take a tour on a canal taxi, or even a little cruise. Though I was happy to lace up my shoes—leather ones, not wooden—and take a walk, crossing bridges and tracing waterways, and losing myself as far from the tourist crowds as possible.

Fly: While The Hague and Rotterdam share an international airport, if you’re flying from North America, you’ll land at Amsterdam’s Schiphol Airport (AMS). One of Europe’s biggest hubs, a number of nonstop flights from major cities like New York, Chicago, and Toronto fly here. Passengers can land, then board one of those trains to almost any other destination in Holland.

Getting Around: There are few places on earth where a rental car is less necessary. The Netherlands has one of the world’s very best public transit networks, with fast, frequent trains connecting cities, and trams, buses, and sometimes subways moving people quickly and efficiently in town.

Stay: Housed in the offices of a former independent newspaper, The Slaak celebrates the paper’s 1950s heyday, with a sleek, vintage feel in both public spaces and guest rooms. Located on a leafy street in Rotterdam, you can reach Delft, The Hague, and Kindersdijk quickly from the nearby train station.

Take Note: While you’ll find plenty of places to dine on elevated cuisine, some of the best Dutch treats are the simplest—street food like stroopwafels (sweet little waffles) or cones of chunky fries served with the creamy mayonnaise perfection, “fritessaus.” For the latter, in Rotterdam (or Amsterdam), check out Frietboutique, which, happily, also serves ice cream.