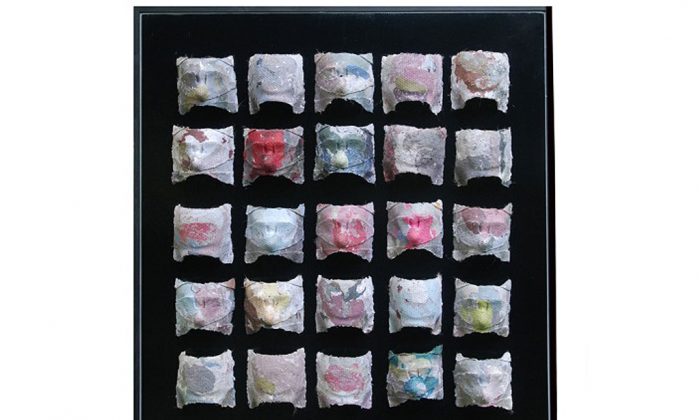 ‘Dust to Dust,’ the Art of Love

“Throw it away, get rid of it. It’s flammable,” I can hear him saying to me. “Oh no,” I would reply, “someday I’ll make an art project from it.”

I am a weaver who makes many of those beautiful chenille scarves that are so soft and colorful. After the scarf is woven it must be “fulled,” which is weaver’s lingo for finishing off a project by either washing it or moistening it. After each set of scarves is finished they are taken off the loom and moistened, the fringe is tied up, and they are put into the dryer with a fabric-softening sheet. What comes out of the dryer door are wonderfully soft scarves.

And what comes out of the dryer lint collector is the most beautiful dryer lint you can imagine. How could I throw it away? Even regular dryer lint has many more subtle colors from each load of wash. Not only did it contain the fibers from our clothes, but bits of plant fiber from leaves or grass, cat hair, bits of tissue from an unchecked pocket.

Instead of papier-mâché, I thought dryer lint mâché or dryer lint handmade paper would be really interesting. Or a dryer lint sculpture. The possibilities were too much to throw away all that potential. Sorry, Byron.

Byron was the love of my life. An amazingly sweet, intelligent, fun human being who never wanted to stifle my creativity, he never demanded but would occasionally remind me to “get rid of it.” Thank god I didn’t. People have often asked me what gives artists ideas. What is that spark that allows artists to say something in a way that others haven’t?

Just months after 9/11 this lovely man was diagnosed with mucosal melanoma in his sinuses. All prognoses gave him 0 to 5 percent chance of survival. It’s a real killer, although very rare. We wanted to do everything we could to be in that small percentage.

One of the last-ditch, unlikely efforts was to try radiation. It was a new technique where they pinpoint the cancer with strong doses of radiation next to very vital organs. To be more precise they create a plastic facemask that is used to hold one’s head very still while being irradiated.

When the treatments were finished they gave Byron the mask of the front and back of his head. It was a very thick, perforated mask that started about at eyebrow level and ended at the mouth. When he got home it got stashed at the back of his bedside table. After he died in December of 2003 at the age of 59, I was totally devastated.

And I wanted him to be remembered. I wanted his ideals to be passed along to others, so I had a classroom dedicated to him at Baruch College in New York. I also wanted to capture my feelings for him in my artwork.

At first, I painted more traditional portraits. It was a way of putting him back together after all his surgeries. However, I felt the work should not only be a reminder of him, but a more philosophical, more universal statement. How does one measure a life, not just his life specifically, but also all our lives?

A few years after he died, I ran across the plastic radiation masks. How could I throw them away? An impression of his face and back of his head, not quite a death mask, certainly not recognizable, but the impression of a man about to die. Wasn’t that what all of us are facing?

Somehow at that point I thought of that “stuff” I couldn’t throw away, the dryer lint. The cells from our skin, the fibers from our clothes, Kleenex, cat hair from the animals he loved so much. It clicked. Dust to Dust.

The next step for an artist is how to pull it off, all the technical considerations of creating dryer lint masks from the radiation mold mask. I considered how to present them, the details of form and color. It was important to make the piece compelling to look at, not morose or ghoulish, but a simple statement of the reality facing all of us.

Our time and experience here on earth is, or should be, beautiful. It’s worthwhile. It’s part of a much bigger mechanism in the universe. Byron was a part of it. I’m a part of it. You’re a part of it.

Sandra Griffin David is an artist in Pine Plains, N.Y.