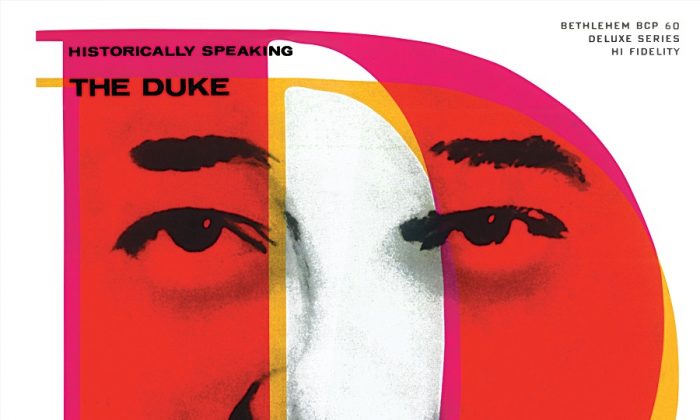 By the mid-1950’s, big band jazz was in decline. Duke Ellington (1899-1974) kept his group together with money from his music royalties. (During his lifetime, Ellington composed more than 3,000 songs.) He signed a deal to record two albums for the Bethlehem label in 1956. “Duke Ellington Presents” and “Historically Speaking” were the two LP’s and both are now released on CD by Naxos Records.

Shortly after recording these albums, the Ellington band appeared at the 1956 Newport Jazz Festival and electrified the audience. That performance, especially tenor saxophonist Paul Gonsalves’ 27 consecutive improvised choruses on “Diminuendo and Crescendo in Blue,” revived interest in Ellington and Duke continued to tour and compose until his death in 1974.  His music played a part in the film “American Hustle” where the con artist portrayed by Christian Bale meets Amy Adams and lures her out of a party to listen to the Ellington band play “Jeep’s Blues” from the Newport recording.

The two Bethlehem albums, with the same personnel as at the Newport Jazz Festival, are different in conception from one another. “Historically Speaking” presents the band playing pieces from the group’s 30 year history. “Duke Ellington Presents” is about half pop songs and the rest Ellington and Strayhorn compositions.

The band at the time had a strong lineup with some players who basically spent their whole careers with Ellington.

Alto sax player Johnny Hodges (aka “Jeep” or “Rabbit”) had been with Duke since 1928. He left to form his own group in 1951, but returned in August 1955. Gonsalves began playing with Ellington in 1950 and spent 24 years with the band. Baritone sax giant Harry Carney started with the band in 1927 and stayed until Ellington’s death. He said, “Without Duke I have nothing to live for” and he passed away four months after the bandleader. Ray Nance, who played trumpet and violin and occasionally sang, started with the band in 1940 and remained until 1963. Clarinet player Jimmy Hamilton was with the group from 1943-1968. Drummer Sam Woodyard was a recent arrival who ending up staying for 13 years. Trumpet player “Cat” Anderson joined in 1944 and remained with the Duke until 1974. Reedman Russell Procope was with the group for 28 years, beginning in 1946. Rounding out the band were Clark Terry and Willie Cook on trumpets, Britt Woodman, John Sanders and Quentin Jackson on trombones, and Jimmy Woode on bass. As always, Duke played piano.

The opening track on “Duke Ellington Presents” is George Gershwin’s “Summertime” with “Cat” Anderson showing off his spectacular high notes. Gonsalves is featured on two tracks that display different aspects of his talents. David Raksin’s ballad “Laura” is treated to a rhapsodic approach while Ellington’s swinger “Cottontail” is frenetic. On “I Can’t Get Started,” Ray Nance plays violin and provides a vocal in the Armstrong tradition. The band’s vocalist at the time was Jimmy Grissom and he sings “Everything But You” sounding like a lighter voiced Billy Eckstine. “My Funny Valentine” is enlivened by Quentin Jackson’s slide trombone. Ellington’s “Frustration” focuses on Harry Carney’s magisterial baritone sax playing. “Day Dream” begins with Ellington’s piano leading into the creamy tones of Hodges’s alto. “Deep Purple” and “Indian Summer” (featuring Hamilton and Procope, respectively) maintain a gentle mood but the whole band gets a workout in the “Blues” at the end.

“Historically Speaking” begins with Ellington’s charming “East St. Louis Toodle-O.” The tune was co-written by trumpeter “Bubber” Miley and Ray Nance evokes his growling style. “Creole Love Call” substitutes for Adelaide Hall’s vocal on the original recording with trumpet and trombone backed by clarinets, ending with Hodges’ alto. Ellington’s swingers are represented by “Stompy Jones,” “The Jeep is Jumping” (with Hodges soloing), “Jack the Bear” with Jackson recalling “Tricky Sam” Nanton’s growling trombone and “Stomp Look and Listen.” Hodges and Nance are featured in the aptly titled, “In a Mellow Tone.” “Ko-Ko” is taken at a fast clip, fueled by Woodyard’s drums.  Billy Strayhorn was an immensely talented composer/arranger who spent 30 years as Ellington’s alter ego, even penning “Take the A-Train,” which became the band’s theme. The “Historically Speaking” album contains Strayhorn’s “Midriff” from 1944.  A delightful rarity is Ellington’s “Lonesome Lullaby” featuring Ray Nance’s violin with some pizzicato playing.

One egregious error in Joseph P. Muranyi’s liner notes is attributing “Upper Manhattan Medical Group” (aka “UMMG”) to Ellington. It was a Strayhorn composition, new at the time of the recording. The track starts with Duke on piano and features clarinetist Jimmy Hamilton, trumpeter Willie Cook and baritone saxophonist Harry Carney. The title (which Muranyi didn’t understand) refers to the medical facility where Ellington and Strayhorn were patients.

The two Bethlehem recordings were made in the studio and the sound quality on the re-mastered CDs is very good. One problem facing collectors of Ellington’s work is that he recorded for so many labels, making it hard for a casual collector to pick up a couple of albums to distill the best of Duke’s 50-year career. While I prefer the original recordings (albeit with more primitive sound quality) to the ones on “Historically Speaking,” the Bethlehem versions are a decent introduction to Ellington’s body of work. The “Duke Ellington Presents” album is an opportunity to hear some of his dazzling band members in pieces not associated with them.  In sum, these two CD’s provide enjoyment to newer listeners as well as serious collectors.