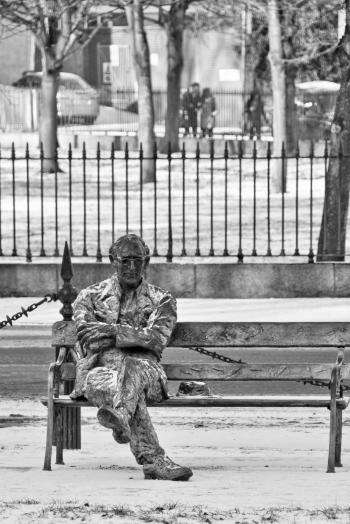 Patrick Kavanagh statue along the Grand Canal in Dublin. Patrick Kavanagh was an Irish poet and novelist. He is regarded as one of the foremost poets of the 20th Century (Martin Murphy/The Epoch Times)
Arts & Culture

Dublin Recognised as a City of Literary Excellence

BY Rita O'Connor TIMEAugust 4, 2010 PRINT
The recent announcement from UNESCO of their designation of Dublin as a ‘City of Literature’, puts the Irish Capital in a exclusive league of only four cities ever to merit the award.

This much sought-after accolade was bestowed on Dublin by the Director General of UNESCO, and recognises Dublin’s cultural profile and its international standing as a city of literary excellence.

News of the announcement was warmly welcomed by Dr John Hegarty, Provost of Trinity College Dublin, a university that has had more that it's share of connections with Dublin literature over the years.

Dr Hegarty said “This ‘City of Literature Award’ is a magnificent achievement for Dublin and for Ireland and will promote a great opportunity for Trinity to play a part in celebrating the rich heritage of its writers, from past greats such as Wilde, Swift, Goldsmith, Beckett to the creative genius of today’s Kennelly, Barry, Enwright, Longley and Ni Chullean, and it will also promote the development of new understanding of writing through research on the library’s great holdings of printed books and manuscripts.”

The Provost also made reference to the Book of Kells and many more ancient books and manuscripts written in Latin and Greek and housed in the Long Room in Trinity.

“The Trinity Long Room Hub ‘Humanities Research Institute’ is already attracting international scholars to work on our collections and to share their knowledge with colleagues in Dublin” said Dr Hegarty.

"As a university at the very heart of the city, this new international recognition of Dublin’s literary tradition will add fuel to Trinity’s plans in the creative arts, technologies and culture", he concluded.

"The Academy is home to ancient writings by Saint Patrick and also the Brehon Laws, a list of highly defined rules and regulations which governed the lives of the ancient Irish."

The Lord Mayor of Dublin Gerry Breen, who received formal notification from UNESCO, said “I am delighted about this achievement which Dubs have known for years, that this city produces great writers." Mr Breen explained that a detailed application was made last November to UNESCO by a group led by the Dublin City Library Service, and was subject to a rigorous vetting procedure.

Partners in the submission included representatives from library-related organisations as well as culture, art, tourism, government, media and educational institutions across the city and country.

"This award will enable the city to increase its market share as a destination for business and pleasure and Ireland as a creative, vibrant and exciting nation", said Mr Breen.

The Lord Mayor was certain that the UNESCO City of Literature Award would have enormous potential for beneficial cultural and economic impacts, not alone in the capital city but in communities across the country. "The award marks Dublin as part of UNESCO’s creative cities network and will provide a unique platform for Dublin’s literary community," concluded Mr Breen.

Alison Bowden, Director of Edinburgh (previous winner) along with the other cities of literature, Melbourne and Iowa, welcomed Dublin and said that this is a wonderful and welcome addition, and that all are excited about the opportunities for working together. “Dublin has been home to many great writers and we would all like to congratulate Dublin on receiving UNESCO City of Literature status."