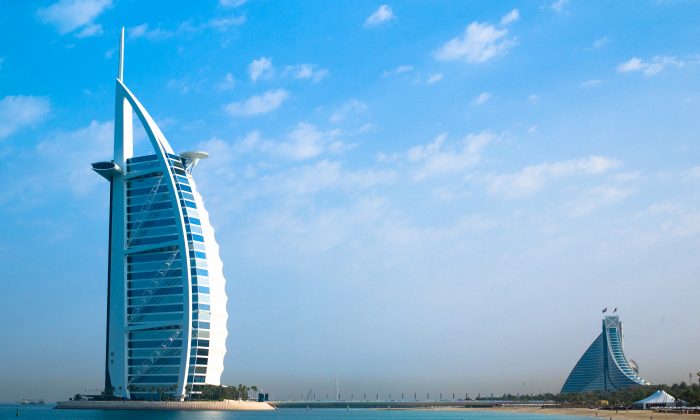 Burj Al Arab, the world’s only 7-star hotel, stands on an artificial island off Jumeirah Beach and is connected to the mainland by a private bridge. Its shape is designed to mimic the sail of a ship. The building on the right is the Jumeirah Beach Hotel. These are just two unique buildings in a city renowned for its unique buildings. (Joi Ito/Wikipedia)
Destinations

Before I visited Dubai in the United Arab Emirates, I asked Arabic-speaking friends to give me a lesson or two in their language. They assured me, however, that in Dubai I would never need to speak Arabic.

And they were right. During a short visit, you may not even meet any locals, as the Emiratis make up a mere 15 percent of the population. For this reason, you should try and visit the Sheik Mohammed Center for Cultural Understanding upon arrival. Here you can learn all about Arabic culture and history. And you are encouraged to ask any questions you might have, no holds barred. The guides speak excellent English, and what’s more, they are Emiratis.

Once you hit the scorching streets, in the hotels, or on the air-conditioned buses, present-day Dubai will meet you. In other words, you will run into people from around the globe. I came across French people, Russians, Germans, and even a Venezuelan. The latter had lived in Dubai for many years and had never learned more than a few words of Arabic. Sri Lankans, Indians, and Filipinos who make careers here see no need to learn even the basics of Arabic.

In fact, the whole city is civil with virtually no crime and very little pollution.

As a person looking for exotic locals I found that quite extraordinary, and was a tad disappointed. But rest assured, there are lots of “wow factor” places in Dubai.

It’s hard not to be left speechless by Burj Khalifa, the world’s tallest skyscraper; Burj Al Arab, the world’s only all-suite hotel; and indoor skiing, skating, and skydiving all inside the famed Dubai Mall. The ostentatiousness and opulence is almost endless. If you’d like to stay in a hotel room whose windows look into a giant aquarium, head for the Dubai Atlantis on Palm Jumeirah. Want to see the world’s largest gold ring? You’ll find it at the Gold Souq, a traditional market.

Is there anything left of the old Dubai? A visit to the Baskakiya area allows one to get an idea of the foundations on which Dubai is anchored. A remnant of the 200-year-old city wall is found within the historic district of Baskakiya. Indeed, the name in of itself brings to mind the area’s early connection to trade. Iranians from Bastak in southern Iran were drawn here in the 1900s, attracted by Dubai’s liberal tax policies, and never really left.

In an area that has been transformed by growth in a mere 35 years, the World Trade Centre, the only high-rise building in the 1980s, barely rates a look.

A walk in the area of Dubai Creek allows one to see how the original Emiratis coped with the searing sun, heat, and humidity that hangs over all summer activities long before anyone had ever heard of air conditioning.

Dubai’s building boom just goes on and on. Tens of thousands of construction cranes, representing 25 percent of all construction cranes worldwide, grace the skyline. Yes, money and progress are king here, but thankfully the aggressiveness that often accompanies those is not. In fact, the whole city is civil with virtually no crime and very little pollution.

However, some might argue that the massive billboards that cover both sides of the Sheikh Zayad Expressway constitute visual pollution. Indeed, the billboards—which bring to mind scenes from the 1980s futuristic movie “Brazil”—and elevated subway do their best to obscure views of the burgeoning skyscape.

A huge series of the billboards announce the planned Dubai Hills Subdivision, slated to cover thousands of acres of desert with a population of over 1 million new residents within three years. In Dubai it probably will happen. It is not a mere plan—it is a glimpse into an assured future.

According to the International Herald-Tribune, in June 2014 Dubai’s airport had overtaken London’s Heathrow as the number one global crossroads, up from 45th place 10 years ago. Although it still handles fewer passengers than the Atlanta Hartsfield-Jackson Airport, it is considered the world’s busiest international air travel hub. Regardless, it will surpass Atlanta in sheer numbers sooner than later.

And what better way to see the city than by plane? I flew into and out of Dubai four times, but the best flight by far was with local seaplane company Seawings. This turned out to be the best move possible. Whereas on my other flights, the city was covered by a dusty haze, the day I went up with Stephane, a Canadian from the Magdalen Islands, mother nature played along magnificently.

We flew over the landmark buildings and had fabulous views of the Palm Jumeirah, the world’s largest man-made island. No doubt you’ve seen pictures of this. It is even more fantastic to see it in person. Another groundbreaking Dubai project, The World, is an artificial archipelago of hundreds of small islands that will eventually take the shape of a world map. The recent world recession put the project on hold, but only temporarily.

My seaplane tour ended at the Port of Jebel Ali, considered the world’s largest artificial port. I got the lowdown on the life of an expat from my fellow Canadian pilot. But then suddenly our talk ended. In spite of the suffocating 45° C heat, my new pilot friend was going off to play hockey that evening.

His team? You guessed it, the Wings!