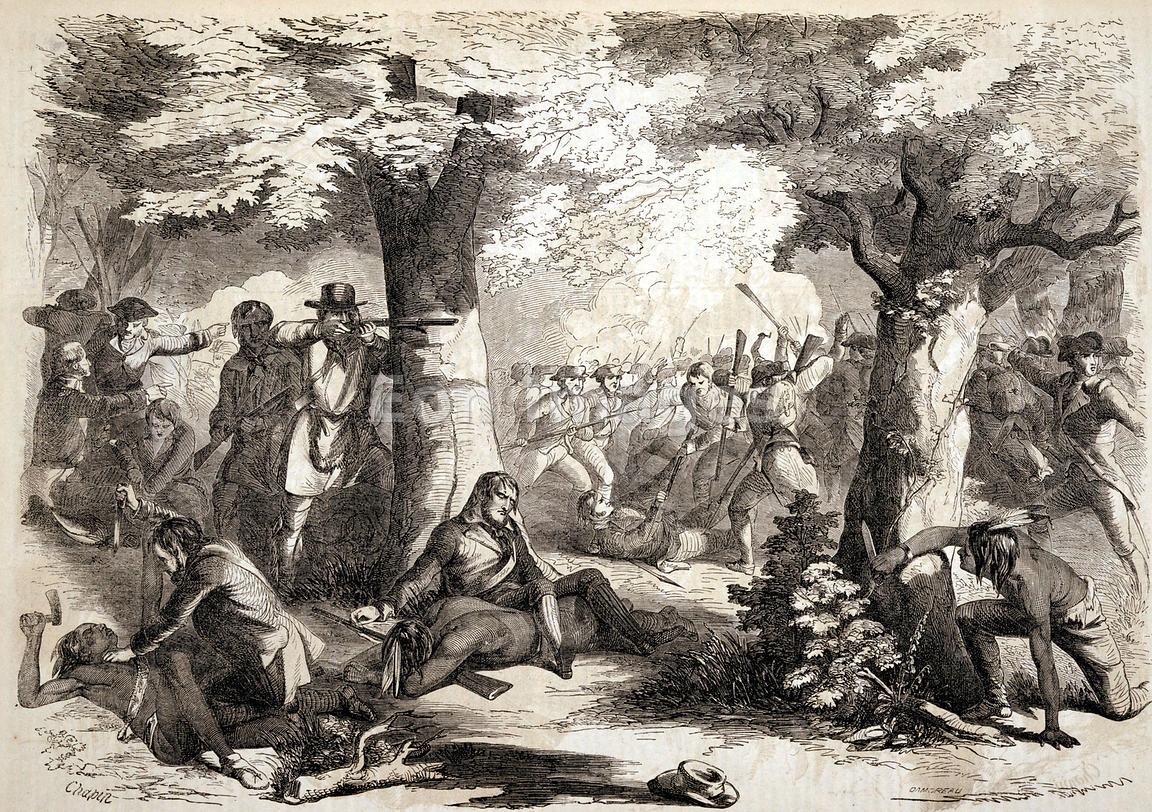 A scene during the battle at Oriskany, New York in August 1777, in a 1857 print, by John Reuben Chapin. American patriots fought the combined forces of the British, Loyalists, and Native Americans. The battle is described rather than depicted in the 1939 film “Drums along the Mohawk.” (Public Domain)
Film & TV

‘Drums Along the Mohawk’ From 1939: The Fight for Independence

Although we sometimes slip into calling this holiday the Fourth of July instead of Independence Day, that name diminishes its meaning. After all, it’s an anniversary of one of the most important events in American history, the Declaration of Independence, which was the beginning of the freedom the United States has enjoyed for almost two and a half centuries.

During the Golden Era of Hollywood (1934–1954), costume films, especially historical dramas, were popular. However, filmmakers often opted for 19th-century stories and settings because the costumes were not only flattering and, in many ways, simpler than earlier modes, but in addition, there were simply more costumes the studios could reuse—making dressing extras and supporting characters inexpensive.

One of the few Golden Age movies about the American War for Independence is “Drums along the Mohawk,” a 20th Century Fox production from 1939. In the 1930s, 20th Century Fox was one of the smaller Hollywood studios and it didn’t have the budgets of Metro-Goldwyn-Mayer Studios Inc. or Warner Bros. However, by the decade’s end, the highly profitable Shirley Temple films had helped the studio’s bottom line, so it could afford to “rent” big name stars like Claudette Colbert and Henry Fonda.

Following the lives of one young couple in colonial America, this story shows how the struggle for independence required great sacrifice from every citizen in the colonies. On such selfless sacrifice our nation was founded.

The story begins with the marriage of Gil Martin (Fonda) and Lana Borst (Colbert). Lana leaves the comfort of her wealthy family’s home for her new husband’s rustic farm in Deerfield. It’s just a small claim in central New York’s Mohawk Valley, but Gil and Lana are determined to make it a success. However, the locals anticipate trouble from hostile Seneca Indians, who are allied with their political enemies, the British-sympathizing Tories. When the Martins are clearing more of their land, Indians attack, and all the locals must seek shelter at the nearby fort. The Martins’ crops and cabin are burnt to the ground, so they go to live and work at the large farm of a gruff yet caring widow, Sarah McKlennar (Edna May Oliver). All the inhabitants of the Mohawk Valley must sacrifice, fight, and band together to win the new land’s liberty.

This film was produced by Darryl F. Zanuck and directed by John Ford. Like most Ford films, it was loosely based on historical events. The script, written by Sonya Levien and Lamar Trotti, was adapted from the 1936 novel of the same name by Walter D. Edmonds. Ford’s first Technicolor production, this film optimized the colorful palette’s visual impact by filming on location in Utah. The finished film was highly successful, earning a Best Supporting Actress Academy Award nomination for Edna May Oliver.

The most common changes to facts in “Drums along the Mohawk” involve the rearrangement of geography and the timeline of events. Perhaps the most obvious deviance from history is the lack of British troops among the colonials’ attackers. Indians in full warpaint and American Tories are the primary enemies of the Continental Army, while the British, the most predictable foe, are conspicuously absent. This is because of the timing of this film’s production. When it was made in 1939, England had just joined the war against Nazi Germany. Although the United States wouldn’t join World War II for two years, Americans sympathized with the British people’s struggle for survival against the German forces. According to HistoryOnFilm.com, Ford “had little desire to show the British as villains when they were fighting for their lives against the Nazis.”

Most war films, no matter which military conflict they depict, focus on combat’s big picture. They close-up on the generals and strategists of either or both sides, while the average soldier is merely a faceless player in the grand scheme of far range action footage. It’s quite another story in “Drums Along the Mohawk.” It focuses on one man’s experience in a war. Although this is the Revolutionary War, General George Washington is never seen, and he is only mentioned in passing. The King of England isn’t the foe; even Caldwell (John Carradine), the local Tory leader who lurks behind the attackers with his menacing eye patch, is beyond Gil’s scope. The only enemy Gil Martin knows is the Tory or Indian coming at him in the moment.

One of the most pivotal battles which takes place during the course of this film is the Battle of Oriskany, an important conflict during the Saratoga campaign on Aug. 6, 1777, involving only North American troops. Instead of showing Gil Martin and his comrades fighting in this bloody fray, the film focuses on his wife, anxiously awaiting his safe return. When he finally does limp home in the rain, badly wounded, he emotionally tells her the awful details of the fight. His firsthand account brings the battle to vivid life, as though every member in the audience were awaiting the safe return of a soldier fighting in that battle:

“I heard a crackling, like a stick breaking. All of the sudden, the fellow next to me stopped talking and fell over on his side. Then I heard a whistle; shots rang everywhere. Somebody shouted we’d been ambushed. … Somebody told me to lay down, and then I saw them—all smeared with paint, yellow and red, every color. In back of them Tories with green coats. I got down back of a log and aimed at a fellow. He leaped straight up in the air and fell forward on his face. After that we just kept shooting as fast as we could load, for I don’t know how long. …  Adam Hartman came over beside me; his musket was broken. He had a spear. He kept grinning. I remember thinking, ‘He’s having a good time. He likes this.’ Pretty soon he pointed off. I saw an Indian coming toward us, naked. I tried to load, but it was too late. Adam stood up and braced his spear. The Indian came down. I never saw a fellow look so funny, so surprised. He just hung there, with his mouth open, looking at us, not saying a word. I had to shoot him. There wasn’t anything else to do. I had to!”

Since the war in this film is fought on such a local level, the settlers find out about their side’s victory in a very matter of fact announcement from their military reinforcements. However, this provides an opportunity for a moment of early patriotism. One of the settlers (Russell Simpson) sees the original Betsy Ross flag being held by one of the soldiers and says, “So that’s our new flag. The thing we’ve been fighting for. Thirteen stripes for the colonies, and thirteen stars in a circle for the Union.” Looking on serenely, Lana says to Gil, “It’s a pretty flag, isn’t it?” Then, one of the local soldiers (Ward Bond) boisterously grabs the flag and says, “Hey, soldier, let me take that flag a minute. We did a little fighting around here ourselves!” He scrambles up the fort’s central tower and mounts the flag. The camera focuses on individual, awe-filled faces as the strains of “Let Freedom Ring” swell in the background.

According to IMDb’s list of Goofs, it’s highly unlikely that the settlers wouldn’t have seen the American flag by then, since it had been the official flag of the young country for four years. However, that’s missing the point of this conclusion. Old Glory has always been more than just a national flag to patriots; it’s a symbol of freedom. Even though the settlers of the Mohawk Valley had lost property, loved ones, and life in the Revolutionary War, they realized it was worth it when they saw the flag. That flag represented freedom, equality, and dreams for the greatest nation on earth.

After gazing at the flag, Gil tells Lana, “Well, I reckon we’d better get back to work. There’s gonna be a heap to do from now on.” She nods and smiles, and we know that the work of rebuilding their farm is not too great a task for them. They will be building a home and life for themselves and their children in a new, wonderful nation. May every American alive today remember the Founding Fathers’ dream for the United States whenever they look at the Star-Spangled Banner. Long may she wave!