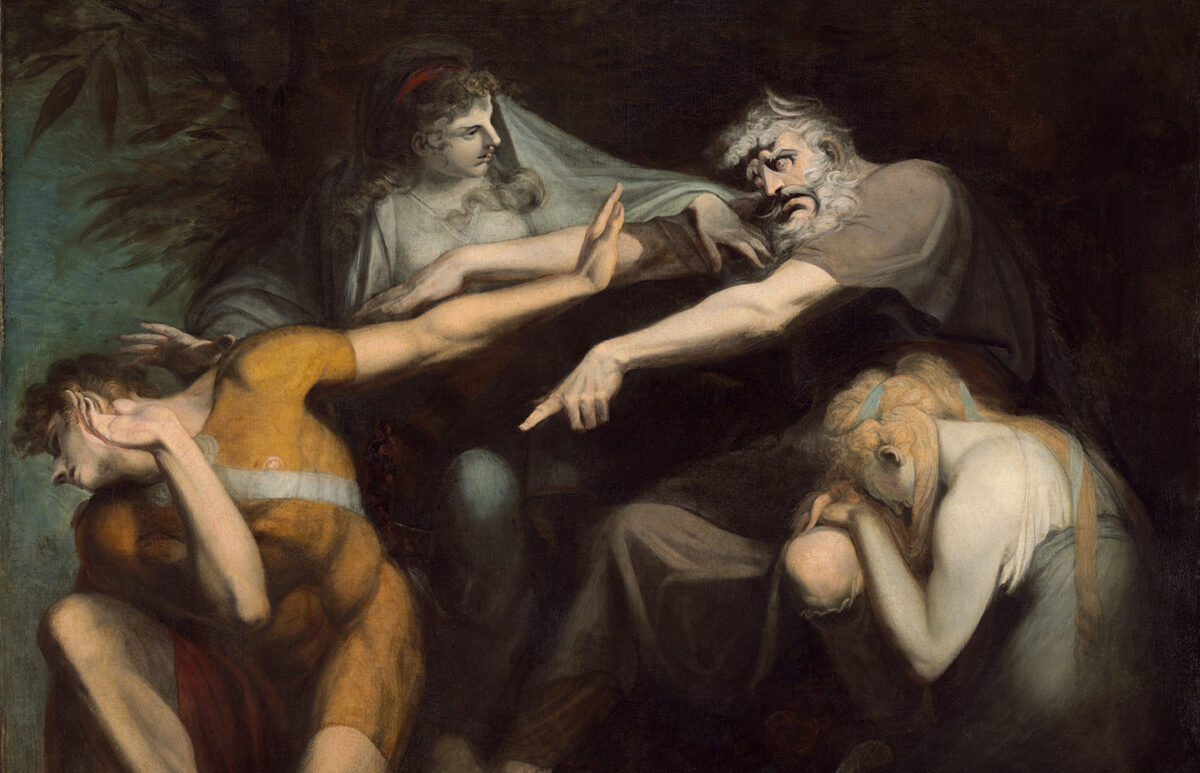 Driving Out Negativity From Our Family: ‘Oedipus Cursing His Son Polynices’

Reaching Within: What traditional art offers the heart
BY Eric Bess TIMESeptember 18, 2022 PRINT

Family can be one of the most beautiful things in our lives. It can be filled with love and support and can even extend outside of blood relatives to include close friends.

However, family can also prove destructive. Manipulation, jealousy, and in-fighting within a family can cause resentment and estrangement. Sometimes, it can be so bad that we don’t even want to be associated with our family or with certain family members.

Then, what makes a family a family? Does family consist of mere blood relation, or does it go deeper?

Oedipus and His Family

We probably remember from the Sophoclean tragedies the complicated story of Oedipus and his family–especially that he killed his father and married his mother. But there is more to the story, and it’s helpful to see the emotions of this particular ill-fated family.

An oracle warned the king and queen of Thebes that Oedipus would later kill the king and marry the queen. In trying to avoid this fate, the frightened king ordered his newborn son, Oedipus, to die from exposure on a mountain, but instead the baby was ultimately raised by the king and queen of Corinth. Thus, a father’s fear led to the wish to kill his son.

When Prince Oedipus grew up and overheard one day that he was fated to kill his father and marry his mother, he, not knowing that he was adopted, was also frightened; he left Corinth to avoid this horrific fate.

But his journey led to a chance encounter with a proud, older man who ordered Oedipus out of his way on the road. When the willful Oedipus refused to give way, the king—for it was Oedipus’s own father—berated and struck the young man out of anger. Also in prideful anger, Oedipus killed the man for these transgressions.

Oedipus is also known for defeating the Sphinx, which was terrorizing Thebes. For this deed, the Thebans proclaimed him a hero and accepted him as their new king. Thus, Oedipus married the queen of Thebes. Together, they had four children: two daughters and two sons.

As the years went by, a plague visited the city. The plague could be lifted only if the murderer of the previous king was found and expelled from the city. Thus, Oedipus’s duty as king was to find the culprit who murdered the king. When the truth was revealed—that Oedipus killed the king, his father—the queen, out of shame, committed suicide. And Oedipus, realizing that his own anger and pride caused his fate to be fulfilled, and ashamed of his crimes, blinded himself. Banished, he left Thebes and aimlessly wandered the earth.

Although the first part of Oedipus’s story is best known, the rest of the story also demonstrates the destructive nature of this family.

Oedipus’s daughter Antigone helped and guided her blind father for years, while his two sons, Eteocles and Polynices, who had done nothing to aid their father, fought each other over who would rule Thebes.

The oracle promised victory to whichever son could get Oedipus’s blessing. The oracle also prophesied that Thebes would fall when any Theban stood upon Oedipus’s grave. In an attempt to garner his blessing, Polynices with King Creon (who took power after Oedipus left) traveled to see Oedipus.

By this time, Oedipus had wandered blind for many years, and had had time to consider his own failings while enduring a great deal of suffering. He had come to gain great wisdom.

Instead of bestowing his blessing, Oedipus, disgusted by the jealousy and fighting between his sons, cursed them. As a result, Polynices and Eteocles killed one another.

Then, in an attempt to control where Oedipus was buried, King Creon kidnapped Oedipus’s daughters (his nieces, in fact) to force Oedipus to return to Thebes. King Theseus of Athens, however, imprisoned King Creon and reunited Oedipus with his daughters. King Theseus also gave Oedipus a blessing to stay in Athens despite Oedipus’s warning that his presence might cause war with Thebes.

When Oedipus later prepared for his death, he decided to share the secret of eternal life with the one person who was kind to him, gave him shelter, and saved his daughters: King Theseus. Oedipus died and was buried in Athens. No Theban dared to invade Athens, for were they to stand upon Oedipus’s grave, Thebes would fall.

Henri Fuseli’s painting “Oedipus Cursing His Son Polynices” provides a visual illustration of the moment when Oedipus drives away and curses his son. On the left of the painting, Polynices (dressed in yellow, white, and red) has come to meet his father, Oedipus, and receive his blessing. Yet the focal point is Oedipus, who points his finger toward his son. Oedipus’s high-contrast figure emerges out of the darkness on the right side of the composition. The blind Oedipus grabs his son’s arm, curses him, and points for him to leave. Polynices puts his hands up as if to stop Oedipus’s curses.

The two faithful daughters, Antigone and Ismene, support their father. Ismene cries on Oedipus’s leg while Antigone puts her hand up to shield her father from his son.

Together, the four figures are arranged in a very dynamic, swooping composition that adds tension between the figures.

The Foundation of Family

There are certain emotions throughout Oedipus’s story that result in negative consequences. Fear causes his birth parents to try to murder him, anger results in his killing his father, and pride comes before the shame that causes his mother to kill herself. Oedipus’s shame, perhaps, also results in his banishment and wandering, and the envy between his sons pushes him to curse them.

Let’s take a moment to truly consider the great suffering in this tragic story. Can you imagine a family so bad that your parents wished you dead? That you would unknowingly kill one parent and marry the other? Can you imagine bearing children with one of your parents, only later to have your sons lend you no support when you were in your greatest need? Can you imagine one of your sons returning to gain your blessing only so that he might rule the very land you’ve been banished from?

Could it be, then, in Fuseli’s painting, that Oedipus isn’t merely cursing his son but what his son represents? To me, Polynices represents all of these tragic sufferings due to negative emotions. Oedipus’s sons, especially, are the continuous reminder of everything that has gone wrong with his family.

The fact that Oedipus points for his son to go away and curses him tells a deeper story about Oedipus’s understanding of family. If Oedipus blesses Polynices in a fight against his brother, he would have blessed not only the violence within his family but also the fear, anger, pride, shame, and envy as an accepted part of family life.

Instead, Oedipus drives away and curses the negativity that Polynices represents. If violence, anger, fear, envy, pride, and shame are blessed as the foundation of family, they will only serve to tear a family apart. Oedipus recognizes this and drives out and curses these qualities and emotions.

Oedipus curses the negativity his sons represent, but he blesses Theseus with death’s opposite—eternal life. And why does he bless Theseus, the king from a foreign land? The king represents kindness. Oedipus grants his blessing to Theseus, who didn’t even request it. He blesses what Theseus represents: kindness, hospitality, and standing up for what is right. A stranger becomes the one with whom Oedipus shares his secrets; a stranger becomes family.

Of course, our blood relations are our family. But our relationships are meaningless without kindness. If the negativity that Polynices represents in Fuseli’s painting haunts our family life, we will suffer for it. How might we banish such negativity and accept kindness as the foundation of our families?