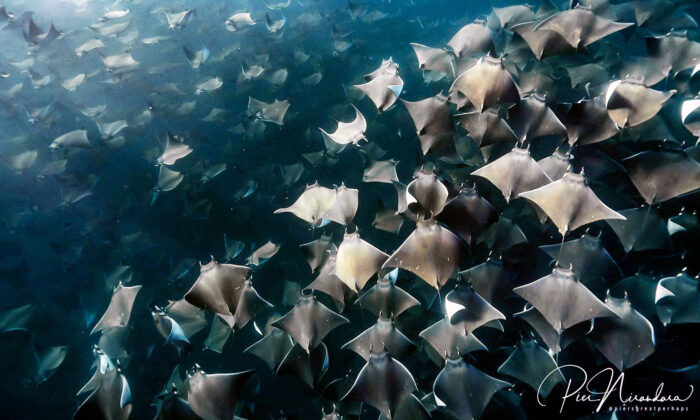 A young 27-year-old divemaster from Thailand was leading an expedition off the coast of Baja California when she witnessed a breathtaking sight—and managed to capture it on her underwater camera.

Hoping to swim with marlin in Magdalena Bay last November, Pier Nirandara and her group stumbled across a few thousand mobula rays swarming in perfect formation beneath their boat and were entranced by the hypnotic spectacle that unfolded.

The photos speak for themselves.

Originally from Bangkok, Nirandara, a certified divemaster, author, and film producer, has been photographing for about a decade and has been diving for even longer (since the warm waters of Thailand first enticed her to jump in). She combined both interests to portray some of the magic the world underwater has to offer: photographing kelp forests, wrecks, sardine runs, and now mobulas.

“I was leading an underwater expedition at Magdalena Bay in Baja, Mexico. We were actually out looking for marlins and bait balls,” she told The Epoch Times, “when we stumbled across a huge aggregation of mobula rays.”

The group of rays, called a fever, surprised them; on the spur of the moment, Nirandara jumped in with her camera, and no breathing apparatus, for a free dive, hoping to take advantage of the impromptu run-in.

She snapped these unbelievable images of the mobulas gliding effortlessly through the water in perfect, natural synchronization.

“There’s something inherently peaceful about swimming with hundreds or thousands of mobulas and sharing the ocean with these fantastic creatures,” she told StoryTrender.

“If you stay calm, they swim past you in a mesmerizing group.”

To take such impressive shots, Nirandara told the newspaper, “Being a good freediver is a must!” And that entails stamina to keep up with the fever and good breath-holding technique to get low enough for the perfect shot.

The sublime encounter lasted about 15 minutes, though they saw the mobulas again during other days the following week, Nirandara said.

According to the divemaster, mobulas aggregate in May but can sometimes be seen off-season.

Waxing philosophical, she added, “Ultimately, I believe that the ocean is a universal democratizer—where we all belong, and hope that my photography and storytelling help bring attention to fragile marine environments and how vital it is to conserve them for future generations to come.”