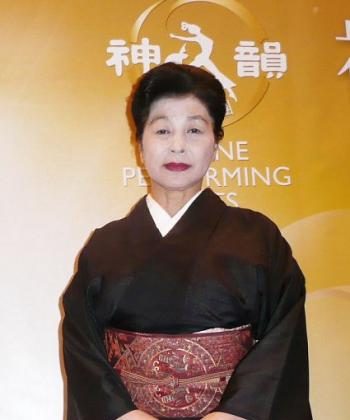 TOKYO—Many women came to the Divine Performing Arts (DPA) 2009 Spectacular at the Hitomi Memorial Auditorium in Tokyo on Feb. 11. in colorful traditional Japanese kimonos to celebrate the founding of the Japanese nation by the emperor, Jimmu, 660 B.C.

The minister of the Japanese Folk Dance Union, Ms. Yamaguchi, was seeing the show for the first time. "It really moves people, I am so grateful that this show is held.

“I learned a lot, and I think I am going to integrate some things into our dance too. For example, the fans in the [dance] Welcoming Spring are like magic. All of a sudden, they transform.” She described the effect as "joyful." Welcoming Spring, known for its floral scene, depicts the coming of spring following a harsh winter. The crisp movements and rapid footwork of this fan dance usher in the new season.

Through DPA's presentation of Chinese classical dance, Ms. Yamaguchi experienced "mind perfection." She said that although Japanese traditional dance also focuses on one’s mind, "It’s far from enough." She plans to bring more friends next year to share the experience.

“I saw that all the performers formed one body. They worked together and didn’t … make any individual stand out. Everyone strove to embrace the theme enthusiastically. This method of performance is very good,” she said.

Also in the audience was Ms. Aoyagi, a Japanese folk dance teacher, who wore a pearly-white kimono. This was her second time to see the show. "I am very moved. I have received a lot of energy from the show,” she said.

“This year’s programs are even more exciting than those of last year. The lyrics of the songs sung by the vocalists were easy for me to understand as it was captioned on the backdrops,” the dance teacher said.

Although the soloists sing in Chinese in all parts of the world where DPA travels, the captions on the background LCD screen provide audiences with a translation of the content so they can experience the song’s meaning.
As a dancer, Hisashi Aoyagi could see the Chinese classical dances with the eyes of a professional. “DPA’s gestures,[and] footsteps are different from those of Japanese dance. The footwork was quick. DPA performers’  expressions were very wonderful. That style is just one-of-a-kind. It is very attractive.”

Mr. Omiya, a retired professor of microbiology at Mie University in Mie Prefecture, received an invitation to the DPA from one of his research colleagues. He was touched by DPA’s enactment of cultural themes. “The traditional principles in the show like honoring God are so splendid. And the concept of descending from the heaven was wonderfully portrayed.” He found parallels in Japanese mythology in opening act, The Five Millenia Begin. Professor Omiya liked the variety of the show, especially the different dances, “The dances represent the different ethnic groups in China, and it’s really great.”

DPA will be stopping in Hiroshima over the weekend and then on to Osaka on Wednesday.