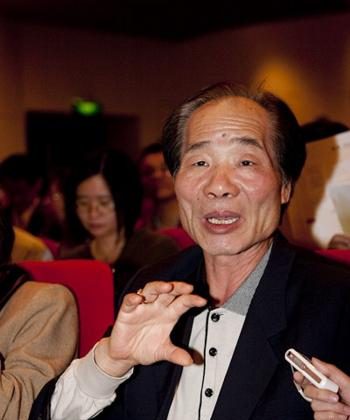 Mr. Zeng was moved by the program, Heaven Awaits Us Despite Persecution, depicting a father who is persecuted to death by Chinese Communist Party policemen for his belief in Falun Gong, a traditional spiritual discipline.

“The policemen were so ruthless and brutal to persecute that Falun Gong practitioner like that. Upon seeing that scene, I could barely control my anger.”

Yet, after witnessing a group of divine beings descending to the secular world to save that practitioner by bringing him to Heaven as a Buddha, Mr. Zeng’s said his heart was so filled with emotion that he wanted to cry.

“This program is very well planned—well enough to inspire mankind, evoke compassion. The content of truthfulness, compassion, and forbearance particularly inspired me.”

Jing Bin, vice-president of Tainan Central Radio, accompanied Mr. Zeng to DPA. He was also touched by Heaven Awaits Us Despite Persecution and the scene where gods came down to take the father to Heaven.

“There are many people practicing Falun Gong exercises in various parks in Taiwan. They are very peaceful. The more the Chinese regime suppresses it, the more the world will have an eye on this situation.”

In terms of the entire production, Mr. Zeng said: “The programs were extraordinary. The designs change every year—very creative. I love the backdrops; that is an unique specialty.”

“Every program was beautiful. The show allowed me to learn more about Chinese folk dance and Chinese classical dance, which I was not familiar with before. I gained a lot of knowledge, too, from the little stories and tales,” said Mr. Jing.

He said that he had never seen such a show in Taiwan, probably because of DPA’s content.

“Many shows do not convey that much meaning. And it’s so great that such young performers can be trained to such a level.”