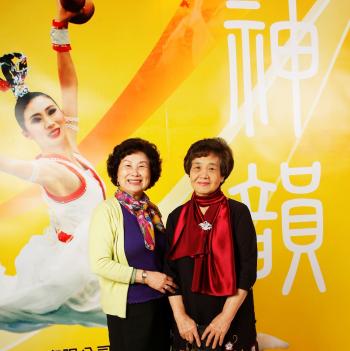 She was moved to tears after watching the DPA show for the first. The song "Finding Myself" by tenor Yuan Qu deeply touched her and she repeatedly said, “It really is too marvelous.”

Ms. Sioudu said that she resides in the United States quite often as well. However, she did not get a chance to watch DPA while she was in the U.S. so she decided to watch the premiere in Taiwan.

The lyrics of the song touched her heart as they reminded her of numerous personal experiences.

“Maybe nowadays, everyone’s days and nights are not easy. Sometimes people become very depressed. So probably that’s why they’d be moved [by the song].”

She said that young people in particular should see the show, because nowadays they face setbacks and take things too hard. She believes that people’s outlooks on life will be enlightened upon watching the show.

As a sponsor of DPA’s local organizing-staff dresses in Tainan, she said that purple dress worn by a nearby organizing staff member was designed by her. Yet upon seeing the show, she said that her skill is incomparable to the designs of DPA costumes. “[DPA costumes] are truly so gorgeous.”