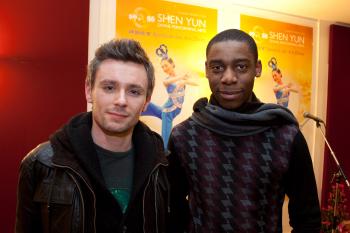 Mr. Lesieux was so impressed with the performance that he said he would cover the show on his magazine's Web site, which falls under his jurisdiction covering shows, performances, and movies.

"I find this to be an incredible show.

"I found it really interesting; the choreography was fluid, very delicate. The music—these were things we are not necessarily used to hearing here—I find the orchestra quite extraordinary."

DPA brings to life classical Chinese dance and music in a gloriously colorful and exhilarating performance.  It was the first time the two friends had ever seen such a show.

Inspired by the spirit of an ancient culture, DPA's masterful choreography perfectly match graceful routines that range from grand processions to ethnic folk dances, while groundbreaking music combines the best of Chinese and Western composition. The high-tech animated backdrops conjure celestial palaces and pastoral vistas, as ancient heroic legends and modern courageous tales are danced upon the stage.

"It's very colorful, the color schematic is in a way that we don't really find in the Occidental mode. I found this very interesting, but these are things that make it so that we are very 'in the show,'" he said.

Mr. Lesiuex said he would share the show with his readers as well "for the music, the choreography, and for the content. It's very beautiful."

His friend, theatrical actor Mr. Fuller, said he was impressed with the fluidity of movement.

"The ease in fact—that is what really impressed me—the ease with which they danced. The facility, the way the dance features—that everything is normal, everything is so easy.