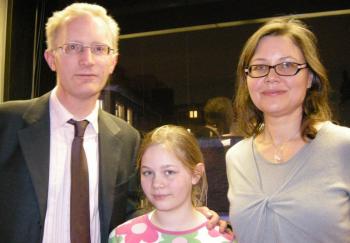 Mr. Maury and his family (The Epoch Times)
Arts & Culture

Around London, many people were wondering about the show after they had seen the beautiful flyers.

Mr. Maury, a patent attorney and partner in an international law firm, was pleased. When asked if he liked the performances, he responded: “Very much, yes. Much better than I thought even.”

The dancers in their colorful costumes were among Mr Maury’s favorites. “I think the costumes and the standard of dancing [stuck me the most]. They’re all smiling and obviously enjoying it. There’s a very good feeling from it.”

The ancient Chinese stories also appealed to him, although he had not heard them before. “I hadn’t come across those stories, but the way they were explained by the people [hosts] introducing was helpful.”

Mr. Parker, a commercial property general manager, and his wife, a native of Japan and the location manager for a TV production company, were quite impressed with the DPA show.

“The quality of the dancing … It was very well choreographed with fantastic colour and movement,” said Mr Parker.

Mrs. Parker shared her thoughts. “I loved the elegant and beautiful ladies. I liked the costumes. Their texture and the movement were very beautiful—with the hand movements.”

They also spoke about the orchestra, with both Western and Chinese instruments.

Mr. Parker said: “It was a very good orchestra. It definitely had this Eastern feel. A lot of them were very young, but they played very well! Very talented young people.”

Mrs. Parker liked the combination of music and dance: “I think it complements each other very well. The more energetic parts of the dance were accompanied by the tempo of the music.”

Mr. Parker noted: “There’s a long tradition of the mystery of the East. A lot of it is tied up to China—Buddhism and Confucianism. I think that comes through particularly [clearly] in the piece about persecution. It definitely comes through.

Mrs. Parker, being Japanese, commented on the Eastern values expressed in the show. “I think they really express the deep philosophy of the East in a very short time. I was really impressed by that. I think the virtue of being good and our values were also well expressed.”

This article was written with files from SOH Radio, a media partner of The Epoch Times.