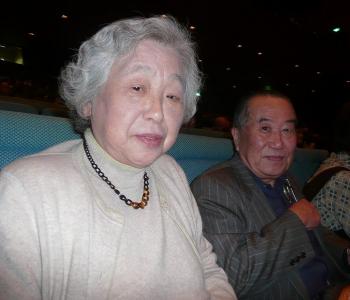 ‘This widens my eyes and brings me astonishment’

The couple watched the show for the first time upon hearing about DPA in a Chinese culinary store, where Mrs. Inoue bought the best tickets immediately.

“It’s my first time watching such a good show like DPA. I am extremely moved,” said Mrs. Inoue.

Mr. Inoue nodded in agreement. “This widens my eyes and brings me astonishment that I can barely describe it with words.”

Usually, the couple simply watch Western shows and operas. They have never seen any other Chinese performances.

The couple said the program "Heaven Awaits Us Despite Persecution" left the deepest impression.

This program shows that oppression is a painful reality for many millions of persons in China today, as witnessed by an innocent family whose father is persecuted for practicing Falun Dafa, a traditional spiritual discipline. Theirs is the human face of the countless tragic, broken lives in China we seldom hear about. The fantastic scenes that ultimately unfold in this piece present a message of hope and bespeak of a longstanding Chinese belief that good people are ultimately rewarded, even if not in this lifetime.

“That little girl is so wonderful. She performed extremely well. It is so hurtful that a good family is broken up just like that. Upon watching DPA, I realized that we know too little about China. I would say we learned some facts about China upon watching the show.”