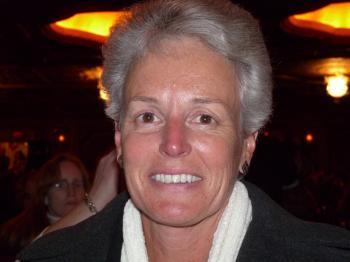 This is the first time Ms. Clark has seen such a show, she said at intermission. (Nadia Ghattas/The Epoch Times)
Arts & Culture

This is the first time Ms. Clark has seen such a show, she said at intermission.

“I think it’s very good. I like the going back from the beginning of Chinese history to modern times, and telling the story. I think it makes it very interesting.”

“Yes, I think it gives you a new respect for where the Chinese people have come over the history of China and the influences and impact of the different dynasties that have transpired over time—the different culture, the dance, the song, and the music. It’s very interesting to someone who hasn’t seen it before.”

One of the New York-based company's trademarks, is story-based dance depicting ancient legends of heroism and modern tales of courage, each conveying a message or moral value relevant today.

“You know, I think I need to read a little bit more about what has happened with Chinese history, because this is new to me. A lot of this is very new to me.”

Although she had visited Japan and seen shows there, Ms. Clark said in terms of the artistic production, "I think there are some similarities, but not the same.

"There are obvious differences. One of the things that’s interesting is … the women—they are fully clothed. There’s nothing, there’s no skin that shows.

"Even in the modern—we haven’t gotten to the second half of the show yet—but I think that one of the things that has struck me is that the men and women that are dancing are fully clothed, and the women are wearing long pants, which is kind of surprising to me. It’s very different from our culture.

She found the performance "tremendously enjoyable … to learn about new culture. That’s why we’re here tonight.”

Commenting on the picturesque state-of-the-art backdrops of celestial palaces and pastoral vistas, Ms. Clark said; “It’s interesting the way they bring the people into the show through the video. Interesting. Very creative.”

Her impression of the presentation so far was: "An appreciation for the Chinese culture and the desire to learn more."