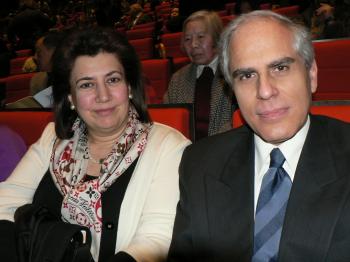 Greek Ambassador and His Wife: ‘Highly superior art, we are very impressed’

By Florian Godovits and Hanna L. Szmytko
Print
PARIS—As Divine Performing Arts (DPA) once again graced the stage at the Palais des Congres de Paris, His Excellency Mr. Dimitrios Paraskevopoulos, Greece's Ambassador to France, attended the performance accompanied by his wife. His Excellency shared his appreciation of the show.

“We are very impressed,” said Mr. Paraskevopoulos, further remarking that the performance "consists of a highly superior cultural art performance: the quality of the dance, the costumes, and also the general ambiance. It is very impressive!”

He added that he was touched by “the transcendental message of overcoming oppression that is experienced by the Chinese citizens.

“There is a message which speaks of a past culture. We are very satisfied and very happy to be here tonight to watch this show.”

Mr. Paraskevopoulos's wife also said she greatly appreciated the show, “I share the same feelings as does my husband—it is a truly exceptional performance!”

'Reminiscent of everything about ancient China'

Upon leaving the theater, she enthusiastically exclaimed that she liked the show “very very much! The show is very pretty, very colorful, and is reminiscent of everything about ancient China.”

Ms. Clain-Saugier added that she has always felt a special connection with China, saying that she "loves China.”

She added that although it had been a while since she had visited the country, several parts of tonight's performance brought back memories.

Jeanmarie Lunsford contributed to this report.