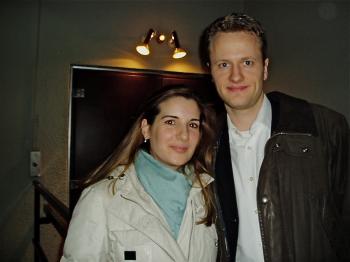 Banker Loves the Music of DPA

The New York-based DPA is composed of a unique group of leading artists who share in a vision of reviving Chinese traditional culture, which has been all but destroyed under communist rule.

"Yes, I think it was quite original. They presented us the Chinese culture as far as I can tell, as a European. It was fantastic. … very interesting to see. We loved the music," said Mr. Volker.

The DPA orchestra combines Western and Chinese musical instruments to create a unique and beautiful sound. It adds a new dimension with the erhu, the pipa, and the suona. The ancient Chinese instruments enrich the expressiveness of the music. Group drum pieces and solo vocals add diversity to the unique musical presentation of the show.

Mrs. Volker said, "For me, I think it was the music, the mix with the Chinese instruments, and the classic traditional, international instruments. I haven't seen that before." Adding that she "did particularly like the gowns, various stunning dresses, and the mix of classic dance with modern and Chinese tradition. … It was beautiful."

This was the first time the couple had seen a DPA performance. Mr. Volker saying he would recommend it to others and Mrs. Volker agreeing, saying she enjoyed it very much. "We will recommend it to [our] friends."