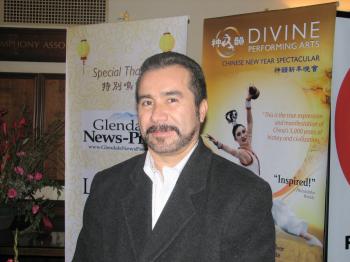 PASADENA, Calif.—Divine Performing Arts held its seventh show in Los Angeles at the Pasadena Civic Auditorium to a packed house on Saturday. Artists, writers and executives in the audience acclaimed the performance.

Ms. Purcell is an actress and horse trainer. She said, “It’s very, very interesting, and it’s not something I know very much about, so it’s very interesting to see. The one dance they had with the persecution was very intense; it was very emotional, and they did a fabulous job in portraying it through the dance.”

Mr. Kimmy, a writer for The Magazine said, “It seems to be a message behind a lot of cultures; a lot of traditions behind a lot of cultures… it’s all getting at what the heart of humanity is, what the role of humanity is on earth, and how it’s more important to work as a group than to focus on any one individuality. That seems to be kind of a central message of all religions or cultures, that there are two roads you can take – one is evil, one is good, and each culture uses a different story to convey that message.”

Mr. Hernandez is sales director for El Aviso, an established, award-winning magazine aimed at Latino readers. “I liked it very much. In fact, I appreciate greatly the cultural aspect that the show brought. It seems that it is carried in your hearts, in your mind and body, and in your soul. It's is truly beautiful and it's worth learning about other cultures.”

“Well, there were many (dances) that were quite appealing to me, but I really liked the combination and coordination of the performance and the backdrop. Such arrangement is the first time I've seen (that) in a performance. That really caught my attention, but everything was quite beautiful!”

Mr. Hernandez said, “I think the way the stories were told really touched my heart. Of all the performances, the one I liked the most was the man who died and went to heaven afterwards [ Heaven Awaits Us Despite Persecution]. That act had the most impact (on me) and I liked it the most. I think the message it expressed really touched my feelings and emotions. I love it!”