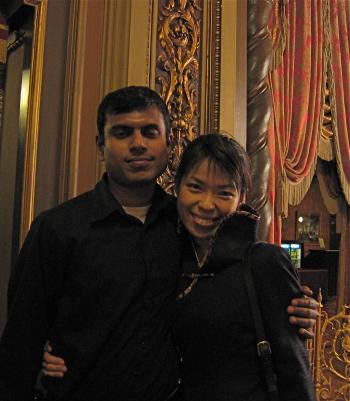 COLUMBUS, Ohio—This time last year, a snow storm hit Ohio, but the last few days Columbus has seen balmy summer days. It was such a night that greeted Shen Yun Performing Arts 2009 World Tour show that wowed an appreciative audience at the Ohio Theatre on March 8. People continuously clapped during three curtain calls, and when the curtain rose for the third time, they continued giving a standing ovation.

A young girl and her mother had seats on the second floor, but during the last piece, Knowing the True Picture Offers Ultimate Hope, they came down to the first floor and stood at the back to watch through binoculars.

At intermission and at the end of the repertory of classical Chinese dance, song, music, and drama performance, audience members gladly offered their views.

Among them was Mrs. Burkhart with daughter Grace, who both agreed that what they just saw “was very beautiful,” and as if by coincidence, they both said they sat too far away to absorb every morsel.

Grace liked the costumes, while her mother enjoyed the variety of story-based dances, such as Mulan Joins the Battle. This beloved Chinese legend bespeaks of loyalty to one’s parents and to one’s country. Mulan is a dutiful daughter who takes care of her aged father. But when he is called to war, Mulan asks that she take his place. Mulan returns victorious 10 years later and once again takes up her household chores. “Yes, that one was cool,” Grace said.

Mrs. Burkhart, who manages a retail store, “thought the ending was very pretty.” Cosmic and earthly merge in a powerful vision of renewal.

“Every story was filled with Chinese values, such as honor and dignity, that definitely showed in the dance and the storytelling.”

Technical Engineer: “It’s really hard to find a flaw. … It was so professional”

Also in the audience were Michiyo, a business training coordinator, and Ashok, a technical engineer. Both were in awe of the world-class presentation. “Money well spent. It was great; the dance was awesome. I like the Chinese girls’ dance. It’s kind of more natural, smooth … synchronizing, the dance,” Ashok said.

Michiyo added: “When you dance and turn around, it’s like a flower! Oh my God! That was very impressive.”

When asked what made an impression, Michiyo said, “it’s really hard to say everything. I’ve been to lots of dance events and performances … I really like the colors, and how they figure out the shape we can make by dancing.”

Masterful choreography and graceful routines with gorgeously costumed dancers move in stunning synchronized patterns. Ashok said: “It was awesome, especially the girls, how they form as a group, the flowers they showed. … It’s interesting. It’s really hard to find a flaw. … It was so professional. We really like it. It’s worth spending money to see this.”

Family: ‘It’s allowed us to take some of the culture—and share it with the children here. … That’s neat.’

Business owners Sheirrie and Debbie had brought their adopted daughter Jillian, of Chinese descent, to see the show. All three were thrilled about the show.

“It’s been wonderful actually—very educational and she [Jillian] is enjoying it tremendously with the culture and learning more about the culture and all the colors,” Sheirrie said.

Young Jillian liked the “one with the fans.” [Welcoming Spring], a celebratory dance as the long, harsh, cold winter is ending and the warmth of spring is in the air. Stunning bursts of color forms the basis of the fan dance.

“Actually, that’s one of the best parts about it—I think we’ve learned about the culture, things that we didn’t know like … where the angels came [from],” Jillian added.

Debbie said: “The story of the monk was something that we didn’t know much about [Monk Ji Gong Abducts the Bride]. That was something very exciting too—so we can continue to teach her [daughter].”

Sheirrie added, “It’s allowed us to take some of the culture—and share it with the children here. … That’s neat.”

Debbie sensed a little more: “I think its something else, it is ‘divine’ like they say.”

NTDTV, a media partner of The Epoch Times, contributed to this article.