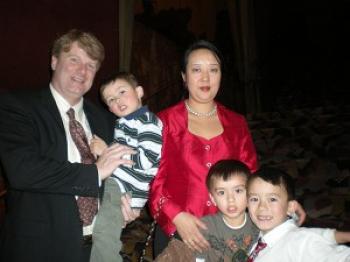 ‘All I feel is pride,’ Says Chinese Designer

Ms. Chen and her family came to watch the show on Saturday. Introducing herself as a costume and headdress designer, Ms. Chen said, “I am so overwhelmed and shocked at the same time. I feel proud and excited. My children are excited too.”

“We can never deny our Chinese background, especially a family like mine. I love to introduce my husband to the Chinese culture with such an opportunity. The show touches him more deeply than any other audio and visual experience.”

She said she would definitely recommend the show to her relatives in mainland China and tell them how it moved her.

Ms. Chen said she was very surprised Divine Performing Arts could fuse characters of different dynasties and the varied ethnicities of China into one show, which she described as a “grand project.”

She also commented on the bright and eye catching costumes. As a designer herself, Ms. Chen said the Divine Performing Arts’ costume designers were a most talented group.

“The style and the color of the costume make me feel they are creating a new design, a way of fashion but with the charm of tradition. The contrast of the colour used is strong, but so beautiful, especially the use of yellow is very daring, but looks so comfortable and bright. I admire the design very much.”

“All I feel is pride, the more our culture is understood by local people like my husband, the more proud I feel.”

Divine Performing Arts finished its run at Radio City on Sunday night and is now continuing on with its world tour.

The Epoch Times is a proud sponsor of Divine Performing Arts. For more information, visit www.divineperformingarts.org