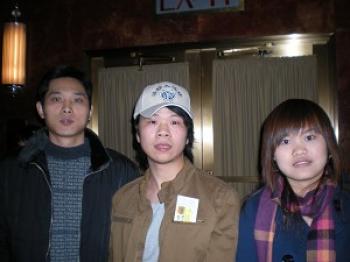 NEW YORK—On Jan. 25, the Divine Performing Arts (DPA) New York and International Companies performed their last and very successful show at Radio City Music Hall in Manhattan. Many Chinese in the audience expressed their delight and were proud that such a large-scale traditional Chinese show could be held in Western society.

Zhang Qingshi and Lin Ling were among the Chinese at the show. They originally came to the U.S. about a year and a half ago.  Upon some friends’ recommendations, they decided to attend the DPA show in NY.

Reflecting on the performance, the two of them said that one of the strongest feelings they experienced was a sense of warmth and welcoming, kind of like returning home after being away for a long time. They say that, although they trusted their friends that the told them the show would be brilliant, they were still surprised at how good it was.

Lin remarked that she misses her family, as it was Chinese New Year’s Eve and it was difficult for her being alone in a foreign land. However, she felt warm all over after seeing DPA. “It had a very familiar feeling, just like celebrating the New Years at home,” she said. “The program was wonderful. The performers were all so beautiful, and they performed brilliantly.”

Lin also expressed that it made her feel very happy to see so many Westerners in the audience enjoying the show.

She said, “I going to call my parents to wish them a happy New Year, and tell my family and friends that I got to see DPA, a Chinese New Year’s show, in the U.S.”

For Lin and Zhang, The Story of Mulan and the Monkey King Conquers the Demon and many other programs in the show brought back a lot of childhood memories. Zhang said, “It was highly exciting and very fun.” He said that when he was watching the show, he recalled many tales that he read growing up and that it was very unique.

Zhang said that although he misses his family, being immersed in the traditional Chinese culture DPA portrays, made him feel more at home.

He continued, “The show was spectacular. The performers’ technique was outstanding.  I hope that Divine Performing Arts will host this show every year and that more Chinese people hear about this show and attend it. When we go back, we will recommend the DPA shows to out friends.”

The Epoch Times is a proud sponsor of the Divine Performing Arts.
Please see DivinePerformingArts.org for more information.