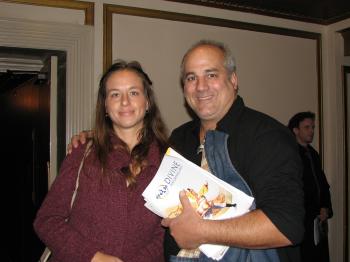 CHICAGO—Unusually balmy weather and the recently renovated Civic Opera House greeted Chicagoans who were treated to the first show of the Divine Performing Arts New York Company on the afternoon of Saturday, Dec. 27.

“Beautiful. Exciting,“ said Mrs. Bigg, a social worker, who enjoyed “the positive message so hard to find in these cynical times. The costumes were so beautiful and the dances entirely synchronized.”

Her husband, Mr. Bigg, director of a non-for-profit organization, was “pleasantly surprised.”

Brought by his wife to see the show, he said he loved how integrated the show was.

“The Western and Eastern instruments and music, how the theme was integrated with the dances, and how the projections on the backdrops were integrated with the performance" were the things he liked about the show. "I’ve never seen anything like this before. It’s like a whole new generation of technology is being used here without taking away from the humanity of it.”

Young children were among the enthusiastic audience of the show.

Ms. Campbell, with her family down from Eauclaire, Wisconsin, simply said, “We’re really enjoying it.”

Ms. Marcus, an engineer, felt it was interesting how the underlying themes of compassion and dignity were brought out, as well as those of the persecution in China. “Everything was blended together well," she said. "The Western and Chinese aspects of it blended well, too.”

In its 2009 season the Divine Performing Arts will perform in over eighty cities around the world dance and music that center on the much treasured traditions in China.