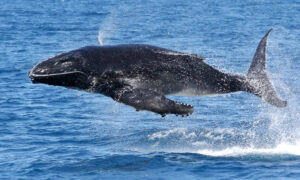 Nearly 30 people were left dangling upside down on the Air Galactica ride in Staffordshire, England, on May 2, for half an hour after bad weather triggered the ride to halt.

Staff at the Alton Towers theme park had to climb up and calm the passengers who were stuck upside down on the ride.

A shower had broke out earlier in the day, which obscured a sensor in the ride.

“This is a standard safety feature on this ride and the ride was working exactly as it is designed to do,” a parks spokesperson told the Mirror.

Some passengers were left “screaming and crying” during the incident and they feared falling off the 65-foot tall ride, the Daily Mail reports.

“The health and safety of our guests is our number one priority and our team followed standard procedures to get the guests off as quickly and as safely as possible. The ride has re-opened,” a spokesperson said.