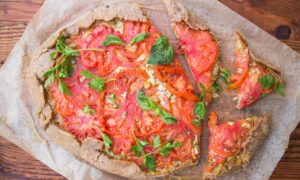 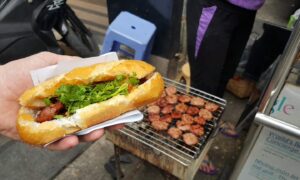 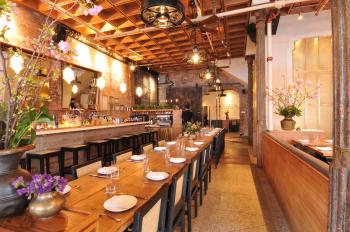 Through the passage of time (Mingguo/The Epoch Times)
Food & Dining

By Nadia Ghattas
Print
Inspired by the old British Empire and from its colonial days, The knights of the Double Crown—the celebrated executive chef Brad Farmerie and chef de cuisine Christopher Rendell, in their quest to provide British fare ala Asia, have put together an eclectic menu with exotic ingredients from India, China, and Singapore making their diners an experience to be remembered. Their code is to bring all they can from their adventures around the world to your table for a fabulous dining journey.

The concept at Double Crown is blending cultures through food and the environment.

Every detail is attended to. As you enter, you are transported through time back into 17th-century Britain. This is where East and West meet harmoniously. The restaurant is very large with high ceilings. The décor is a blend of austere Western church influences and iconography blended with the colorful textures and patterns of Asian temples, with fresh flowers displayed all around.

While the Food Is British Indo-Asian With Pleasant Surprises, the Setting Is Refreshing, Cozy, Friendly, and Happy

Together the chefs have created a menu that explores the cuisine of England as it became exotic—merging with the new and exciting spices and herbs of the East. Unique dishes are found on the menu, which is constantly evolving and changing. The menu has few sections. There is the Snacks section, comprised of a mix of pub fare and Asian Street food—inspired by the street snacks of Southeast Asia, the hawker-style snacks to be shared. Before Singapore’s independence, locals could not afford the expensive restaurants, which catered mostly to expats. Hawker stalls were set up to offer zesty foods for the locals. The other menu sections are the Starter, Dinner, and Sides, while the Dessert menu stands by itself with an incredible list of choices.

One must try some of the signature cocktails made with British standard liquors, gins, and vodkas, and fresh fruits, teas, and spices from the East and South Asia. I had the Mango and Cardamom Sour while my friends had the Piña Colada reconstructed—both were balanced, satisfying, and transporting. From the snacks menu, the Duck Steam Bun with hoisin and scallion is a good example of East meeting West as did the Pint of Prawns served with delicious Mary Rose sauce, giving the right amount of heat that sneaks in. Then came the fabulous carrot and cardamom soup with chili, marshmallow, and pumpkin seeds. Another flavorful and creative dish is the Singapore Laksa with green tea noodles and crabmeat with Thai chili and basil. It is creamy and tangy with a lot of well-balanced flavors. Other starter dishes were Tandoori foie gras torchon with Earl Grey prunes, watercress, and nut loaf; seared yellowtail topped with crispy lotus root with lime vinaigrette, which was very refreshing; and the miso-glazed bone marrow with orange-olive marmalade, which was good but I would have preferred it without the miso.

As for the main course, if you are in a decadent mood and not worried about cholesterol, go for the big braised short ribs, first braised and then broiled and smothered with Guinness five spice sauce, served with roasted parsnips and crispy Brussels sprouts with sweet chili. For those who prefer fish, the steamed snapper topped with prawn dumplings and baby bok choy would be a choice. For chicken lovers the twice-cooked chicken is highly recommended. It is cooked with many different flavors, including ginger, star anise broth, and shiitake mushrooms.

There is also a wine list that offers a global selection of 100 labels with emphasis on natural wines.

After all this, an after dinner drink at Madam Geneva would be ideal. You have to sneak through the secret back door into the more feminine/industrial setting with arches made of raw brick and dark-painted lace-paneled walls. Madam Geneva was a name given to gin by the English in the 18th century when gin consumption became popular among the working class, causing trouble and resulting in Acts of Parliament against drunkenness. To disguise its fiery taste, it was laced with fruity additives. A wonderful interpretation of that is found at Madam Geneva’s bar with vodka or gin poured over crushed ice and topped with marmalades such as cranberry, apples, quince, and saffron. Very pleasant and refreshing. A nice selection of foreign beers is available as well as the bar’s own ginger beer that is infused with lemongrass, Thai red chili, ginger, citrus peel, and other botanicals, which the British mixed with ale, creating a popular drink of the 17th century.

There is so much at Double Crown, and you have to go to experience it. Farmerie said: “This is our baby and it is a big baby. There is much more to explore, and we like to have fun in what we are doing. We also want people to enjoy the playful atmosphere, which we also apply in the kitchen while working hard.”