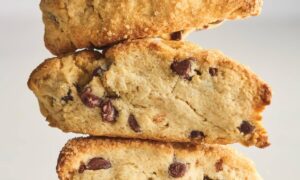 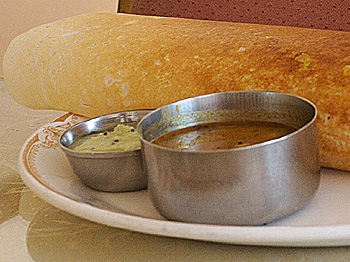 A plate of Dosa with Chutney and Sambhar (Wikimedia)
Food & Dining

Dosa or Dhosa, Delicious Either Way!

Christina Riveland
View profile
Follow
biggersmaller
Print
Dosa, mentioned in 6th century Tamil Sangam Literature, is basically a crepe made from finely ground rice and black lentils. Various spellings for this dish abound including dhosa, dosay, dosai, dhosai, tosai, and thosai. It is a dish customarily eaten for breakfast and is rich in carbohydrates and protein. Dosas are also eaten at other times of day. Those with wheat allergies or gluten intolerance will find the non-wheat dosa a welcome addition to their diets. They might be stuffed with vegetables, meats, and sauces, to create a quickly prepared meal.

The ground meals are blended with water and left to ferment overnight. Those with a blender have an easier task of grinding the raw or parboiled rice and the lentils, which can be replaced with highly refined wheat flour, to make a maida dosa or semolina for a rave dosa.

Small amounts of the overnight-fermented batter are ladled onto a hot, greased flat griddle, called a tava, where it is spread out into a thin circle, like a French crepe, and briefly fried with oil or ghee (clarified butter) until golden brown. It may be cooked on one side only or flipped to brown on both sides. The dosa may then be folded in half and served, or rolled like a Mexican-style wrap.

Dosa is customarily served with a side dish, according the regional and personal preferences. More common side items include:

Chicken or mutton curry (commonly served in non-vegetarian households in Tamil Nadu and Kerala) Muddha pappu (dal) with large amount of ghee, the traditional way of eating dosa in many parts of Andhra Pradesh.

The ubiquitous Indian dish masala dosa probably originated in Udupi, Karnataka, and contains a lightly cooked filling of potatoes, fried onions, and spices. It wraps the dosa around an onion and potato curry or sabji. During a potato shortage, people had to forego their favorite potato curry (batata bhaji) filling without onions in a separate cup and had to do with a larger proportion of fried inions in mashed potatoes and other spices. This mix was then placed inside the dosa instead of in a separate cup.

Orthodox Hindus and Jains customarily avoid onions, but serving the dish that way hides the onions. People enjoyed this new dosa that became known as masala dosa, from the sautéing of spices (masala) during the preparation. There are various masala dosa that appeal to many different tastes like the following variations: vegetable masala dosa, instead of potatoes, peas and other vegetables are mashed to make bhaji, rava masala dosa, rava (semolina), especially for the Bombay Rava, is used instead of rice, and the basic masala dosa with one or two fried eggs served on top.

Brahmins in India traditionally avoid garlic, but serve their red chutney version. Fried in ghee enhanced with garlic, Davanagere benne masala dosa is another variant of masala dosa that recently become popular in other parts of Karnataka. Dosa is made in every part of South India. The dosas prepared by Northern Indian cooks generally prepare the Karnataka type. Other types of dosa include: family roast, a long dosa that can be spread over 2 to 3 feet, green dosa: a dosa stuffed with fresh vegetables and mint chutney, and cheese dosa, a dosa stuffed with paneer

I hope your taste buds are calling to you to seek out the nearest local Indian eatery and indulge in this delectable food, no matter from which place in India the dosa was prepared. Perhaps you can dream up your own toppings or fillings for this delectable, versatile "pancake." How about a perfectly seasoned chicken curry, augmented with elegant coconut cream and sprinkled with ground almonds?

Sounds good to me!