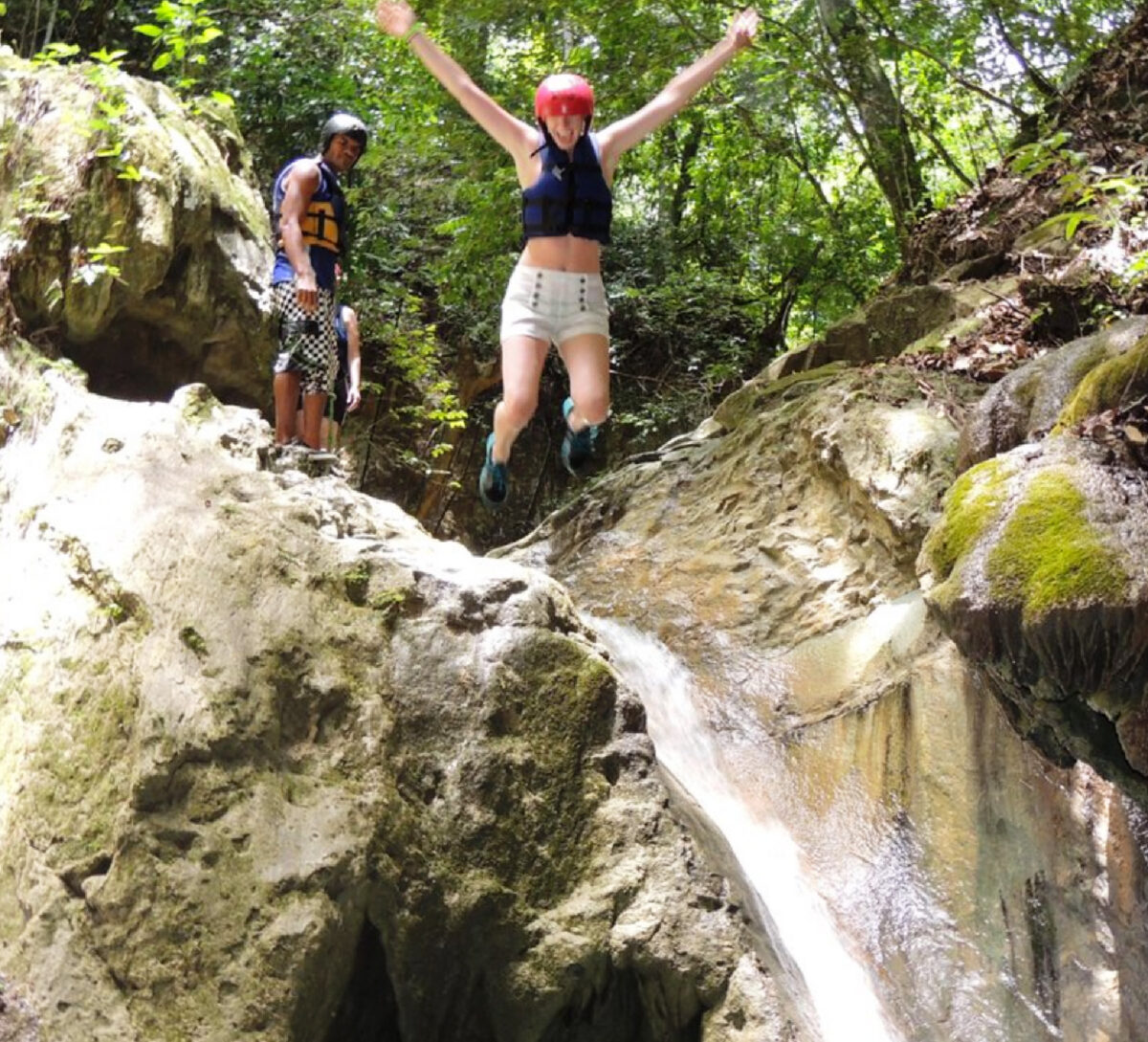 A visitor to Puerto Plata in the Dominican Republic prepares to tackle a natural waterslide. (Courtesy of Iguana Mama.)
Travel

Instead, we opted for Puerto Plata on the north coast, which also boasts lovely beaches but offers a wealth of other activities not available in Punta Cana, too. Here, you can see the countryside, meet the people, visit real towns, and connect with nature instead of just other resort guests. The best way to experience the north coast is through the wide variety of adventure options offered by Iguana Mama.

Back at the waterfall, outfitted in a life jacket and helmet, we began our trek, ascending to the top of the waterfall of choice. Then, we proceeded to swim, hike, jump, and clamber our way to the bottom. As we rounded one bend, my initial reaction was, “You expect me to jump WHERE?” But the guides flawlessly aided my descent so that I hardly felt the extent of the exertion. The first several pools at the top are the easiest to navigate, increasing in difficulty—or fun, depending upon your perspective—nearer the bottom. The guides are there to lend a hand as needed.

Usually, descent is the simpler matter. Not so here. The main options are surging down a series of natural waterslides or jumping over falls into pool after pool of clear, flowing river water. Although the highest jump is a somewhat terrifying 25 feet (depending on water levels), there’s an alternate way down for those who prefer that. Most, however, are about the height of the high diving board at your local pool.

Line Freij, visiting from Sweden, described the experience as “a real adrenaline kick!” She confessed: “I was a little shaky in the knees after the first jump, but after that, I felt like a pro. My favorite part was the slides.” Lunch is provided as a reward for actually making it down.

In one canyon, standing in the water below with rocks protruding on all sides, I was surprised to look up and see a forest above. It was an otherworldly confluence of several of nature’s best features not usually assembled in one place. It is that same emphasis on the off-the-beaten-track connection with nature that propels the philosophy behind Iguana Mama.

Although 27 Waterfalls is the most popular, you can choose from four different waterfall options—with or without zip lines—that vary in terms of difficulty. That kind of choice is what distinguishes Iguana Mama from other tour companies.

Another day, another outing, this time a hike through El Choco National Park. But as with everything Mama, this was not just a hike; it involved the exploration of a variety of caves that added a whole new dimension to the experience.

The stalactites and stalagmites give the caves their eerie sense of wonder, their grotesque shapes and yawning divides lending a sinister, ethereal quality to the caverns. The faraway sound of coqui tree frogs chirping from below the surface reinforces the ghostlike ambiance. The water is so clear that you do not even know it’s there until a sliver of rock causes it to ripple. According to our guide, stalagmites grow only 1 millimeter a year, and if you touch them, the grease from your finger prevents water from being absorbed and therefore stymies their growth. They didn’t appear any the worse for wear.

Each one is different. Climbing down over rocks and roots and using vines for leverage into the cave allows a personal connection not accessible when looking down from above. Grabbing the jagged limestone outcroppings for support as I tentatively slithered down boulder over boulder, I became immersed in a stalagmite jungle; the gingerly scramble back up was equally exhilarating. As a bonus, there is an option to swim in one of the cave pools.

If there is an outdoor adventure to be had in Puerto Plata and its environs, Iguana Mama probably provides it. In addition to its many waterfall and hiking options, there are also canyoning, cascading, catamaran sails, diving and snorkeling, zip lining, horseback riding, ATV adventures, and more. And as the first such adventure tour operator in the area, Iguana Mama still focuses on preserving the non-commercial, less-touristy aspect of adventure travel with a strong emphasis on ecotourism.

And when you’ve finished all of that, you can still visit the beaches.

Because Iguana Mama occasionally updates its offerings, some of them may have changed by the time of your visit IguanaMama.com.