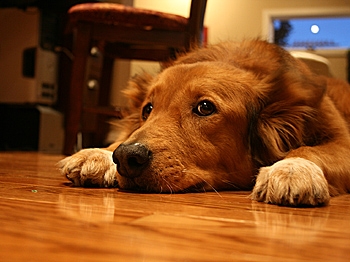 With a little extra care and planning, you can ease your canine friends into the New Year without too much stress for them or you. (Graham Kingsley/Stockxchng)
Life & Tradition

By Bohumil Bartosek
biggersmaller
Print
Quite a few dog owners aren't particularly keen about New Year celebrations. How will their dog will react to all those sound and light effects? Will it not be hurt by this popular activity at the end of each year? How to prepare and protect one’s pet from these unnatural stimulations?

Dogs can be divided into two categories in terms of their reactions to the sounds of New Years. The first group reacts slightly positively or neutrally, with only weak and manageable unrest. When the intensity of the noise increases, they can be calmed down by their owner, which is best done in an environment they are familiar with.

However, more than half belong to the second category. Light, and especially loud sounds, creates much stress, and they get agitated. They might become scared and start attacking or even trying to demolish their surroundings, try to get to the family, or may become aggressive and protective. In some cases they may become disoriented or run away in haste, doing their best to hide themselves.

After New Years there are always more lost dogs than usual, on account of their panicked flight, several mile run, and final disorientation. The hypersensitive ones with a weak heart might even die from anxiety; reactions often depend more on the individual dog and its training, rather than breed.

Some Good Formulas for Prevention

For dogs in the first category, general prevention is sufficient, depending on reactions in previous years. A good idea may be to go for a shorter walk with the dog, using a strong lead. During the most critical time, from 8 p.m. to 1 a.m., it is best to leave the dog at home. Raucous outside celebrations in the dead of the night are not appreciated by your beloved pet.

If your dog isn't marked with a chip or tattoo, stick an address and telephone number to its collar, so it can be returned in the unfortunate case of getting lost.

If the cracker explosions catch you off guard while walking, it's best to avoid loud areas, shorten the lead, and try to divert the dog's attention elsewhere.

For dogs that get nervous when hearing explosives, it is important to find a peaceful area. First of all, your dog should be allowed to be with its “peers,” (in this case, its human family members). If the family behaves peacefully, especially the family head, even a nervous dog can cope. If still a little on edge, lead your friend to a dark cranny of the house where he can hunker down and get over the bangs.

Reduce noise from the explosions by closing doors and windows. If you and your dog are up to it, make up some ear-plugs. They should use foam, just like for humans. If you are especially keen, punch the plugs with needle and attach a thread to them, making it easy to pull out

When the fireworks first start a-cracking, it's a good idea to divert the dog's attention by routine commands followed by its favorite treat, by playing games, regular eye contact, and all-round peaceful behavior.

Some dogs react so strongly that you might be best sedating them. You may want to book with the vet and get your hands on the drugs ahead of time, particularly if yours is a problem creature in this area. Drugs work for several hours, which should be enough if applied at the right time—not too early, and not too late.

It is also possible to try out training with your own bangs, for example, from a toy gun, which can make your dog more resistant to the noise. Be warned, though, that some dogs may simply take it tough, and have no way to adapt to loud bangs. So don’t expect too much, and training should be always be sensitive, natural, and unforced.

A final, questionable solution is to leave the dog alone, or give it to other people and go out to celebrate. In this case, your dog will feel like his "herd" left him in the lurch, and since dogs are by nature herd-oriented creatures, it may get very stressed out. Abandoning your dog like this should be done very rarely, if ever.