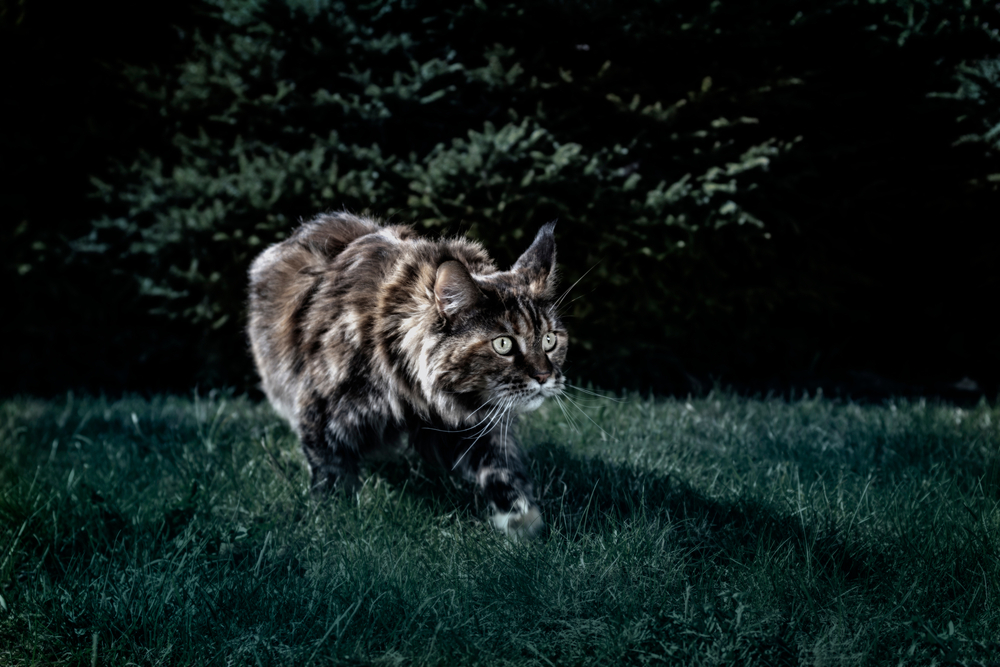 Does My Cat Need a Nightlight?

Q: What can you tell me about feline vision? I’ve heard that cats see well in the dark, but I still think we should leave a nightlight on so our cats can find their way to water bowls and litter boxes in the dark. My partner disagrees.

A: I’m with you: We’ve placed night lights in strategic locations for our pets, too. Still, your partner’s position is valid, because cats actually do see much better at night than humans.

While cats can’t see in pitch-black conditions, they can detect light that is six times dimmer than what humans can see. Several remarkable features of the feline eye give cats superior night vision.

To start with, their corneas are large, and their pupils can open up wide to let in all available light.

This light hits the retina, which contains three times more rods than the human retina. Rods are photoreceptors that see images in dim light and detect movement. Because cats’ retinas are packed with rods, they have fewer cones, the photoreceptors that recognize color. More on that aspect of feline vision in a moment.

Cats’ eyes also contain a mirror called the tapetum lucidum, the colorfully iridescent layer that reflects light that has passed through the retina back onto it. Because of the tapetum, 130 times more light hits the feline retina than the human retina.

However, they don’t see color well. Because their eyes have relatively few cones, colors appear dull, and the red end of the spectrum looks gray. However, they can see violet and blue fairly well, and some cats also see green.

Finally, cats’ visual acuity is about 20/100, so they need to be five times closer than a human with 20/20 vision to see something clearly. However, they can’t focus sharply on objects closer than 10 inches, so they use their noses, whiskers, and paws to help them—even when they have a nightlight.

Q: We entertained guests, including young children, over the holidays. Our dog spent a lot of the time hiding, trembling, and panting while they were here, especially when the noise level ramped up and the place got chaotic. Now that our guests are gone, our dog is back to normal. How can we prevent this problem in the future?

A: Dogs’ hearing is much more sensitive than ours, so it’s not surprising that they often react to loud noises such as fireworks and thunder with anxiety and fear.

Noise aversion, the formal term used to describe untoward behavioral reactions to sound, ranges from noise sensitivity to noise anxiety to noise phobia. Research shows that half of all dogs experience some degree of noise aversion.

A recent study that evaluated family surveys and videos of hundreds of pet dogs indicated that while common household sounds cause anxiety and fear in dogs, family members fail to recognize their dogs’ noise aversion behaviors as signs of stress. Despite what the videos show, 67 percent of the families responded to the survey saying that their dogs were not fearful.

In fact, family members reacted to their dogs’ noise aversion in these ways, ranked by frequency of response: no reaction, amusement, deliberately antagonizing the dog, explanation/analysis of the behavior, or expressing concern.

The next time you plan to have guests, consider limiting the number and asking the children to play outside and be quiet indoors. Your veterinarian can prescribe behavior modification and medication for noise aversion or anxiety so your dog is relaxed.