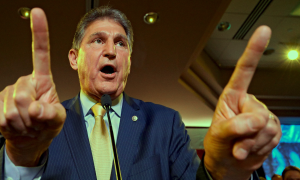 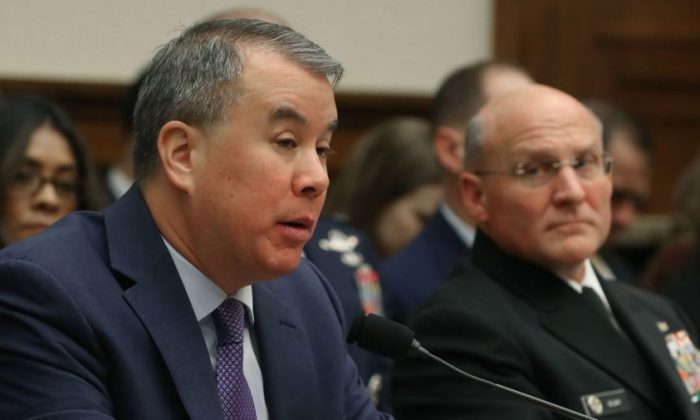 Defense Undersecretary for Policy, John Rood (L), and Vice Adm. Michael Gilday, director of operations (J3) for the Joint Staff, appear before the House Armed Services Committee on Capitol Hill in Washington, D.C., on Jan. 29, 2019. The committee heard testimony on the Department of Defense's support to the southern border. (Mark Wilson/Getty Images)
Politics

DoD Official: Trump Can Use Military to Build Wall Without National Emergency

WASHINGTON—The Undersecretary of Defense for Policy at the Department of Defense said on Jan. 29 that President Donald Trump has the authority to use the military to construct a barrier without calling a national emergency, as he has said he might do if he can’t get funding for a border wall through Congress.

Testifying at the House Armed Services Committee, Undersecretary John Rood was asked by Rep. Mo Brooks (R- Ala.) if the president had the authority to use 10 U.S. Code § 284 to deploy the military to the southern border to “build fences and a lot of other things.”

The law says the secretary of defense may provide assistance to Customs and Border Protection (CBP) “for purposes of increasing ongoing efforts to secure the southern land border of the United States,” which includes the “construction of roads and fences, and the installation of lighting to block drug smuggling corridors across international boundaries of the United States.”

“If you look it up in the dictionary, the word ‘fence’ includes the word ‘barrier’ and the word ‘barrier’ includes walls made of a variety of different materials,” Brooks said. “You’ve mentioned military forces along the southern border, have any of them been deployed pursuant to 10 U.S. Code § 284?”

“I don’t believe any of our forces have been deployed pursuant to 10 U.S. Code § 284,” Rood said in reply. “You are correct, however, that use of authority would authorize the secretary of defense to construct barriers, roads … those types of materials to disrupt drug smuggling.”

He declined to estimate how much it might cost the department were the Army Corps of Engineer to build the wall, saying the cost would depend on what is in the national emergency declaration.

His comments come days after the government went into partial shutdown over the lack of funding in the budget for the Department of Homeland Security for a border barrier.

Only fools, or people with a political agenda, don’t want a Wall or Steel Barrier to protect our Country from Crime, Drugs and Human Trafficking. It will happen – it always does!

Trump has requested $5.7 billion for a steel wall over 200 miles of the U.S.-Mexico border.

Congressional Democratic leadership has called the wall “ineffective” and “immoral,” and has so far refused to allocate any funding for it, even after Trump met their request to end the 35-day shutdown—the longest in U.S. history.

The American people know the president’s wall is ineffective, expensive, and only serves as a political bone to his most conservative supporters—certainly not worth a government shutdown.

“We don’t agree on some of the specifics of border security. Democrats are firmly against the wall,” Senate Minority Leader Chuck Schumer said hours after Trump ended the shutdown. “But we agree on many things, such as the need for drug inspection technology, humanitarian aid, strengthening security at our ports of entry, and that bodes well for finding an eventual agreement.”

Members of Congress now have 17 days to come up with a bill to fund DHS that Trump will be willing to sign. If they don’t, Trump has threatened to call a national emergency or put the government into a partial shutdown again.

As recently as last Jan. 25, Trump expressed optimism that he could reach a compromise with Congressional Democrats, although he has remained firm on the need for a wall.

21 days goes very quickly. Negotiations with Democrats will start immediately. Will not be easy to make a deal, both parties very dug in. The case for National Security has been greatly enhanced by what has been happening at the Border & through dialogue. We will build the Wall!