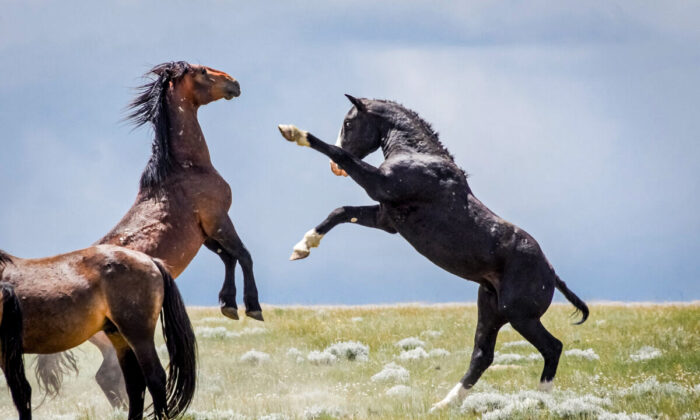 Mustangs in the wild. (Courtesy of Steven Latham)
Northern California

Documentary Showcases Mustangs, A Symbol of America’s Spirit of Freedom

The story of the American mustang is one that reflects much of the country’s own story: one of resilience and freedom. This is the central theme explored in the documentary “The Mustangs: America’s Wild Horses.”

“We wanted to tell, first of all, a great story and feel like an American adventure. We go to all these places throughout the West,” Steven Latham, the film’s director, told NTD Television.

The film explores the history of mustangs, the current situation, and challenges the horses face, and some stories from people who are working to make a difference in the lives of wild horses.

“The wild horse is an incredible animal. … The wild horse represents fierce independence, freedom in the way they live their lives, family bonds, loyalty, integrity,” Latham said. “These are living symbols of our collective past.”

The film begins by exploring the origins of American mustangs, which can be found across the western United States. The horses were first brought to the country by Spanish settlers. Over the years, some domesticated horses escaped into the wild or were freed from corrals by wild stallions seeking to add domesticated mares to their herds.

By the 1900s, the need for mustangs as working animals declined, and the pet food industry began using horses in canned dog food. In the 1950s, the methods and practices used for capturing horses came to light, and they were deemed to be extreme and cruel.

Activist groups called on the U.S. government to pass laws that would protect wild horses, leading to the Wild and Free-Roaming Horses and Burros Act of 1971.

“People try to romanticize wild horses. … ‘They’re symbols of freedom, and let them be free: Don’t round them up.’ I wish we could say that, but it’s complicated,” Latham said. “That’s what we wanted to show in the film. There’s no silver bullet. There’s no easy answer. But that shouldn’t prevent us from doing the hard work to manage them and to protect them for the future.”

As the film reveals, managing and protecting wild horses is a complex issue. Latham said that only about 10 percent of public land is allocated for wild horses to roam, known as herd management areas.

He said that even on federally protected public land, wild horses live in competition with the interests of farmers and ranchers. U.S. public lands are also home to other wildlife and conservation areas.

“Some of the reason why it’s so divisive is because people have sort of weaponized misinformation,” Latham said. “When you have all these social media pages, and they’re all trying to raise money off this issue, it’s just not true.”

The film shares some of the current methods grassroots groups are using to manage the wild horse population, including fertility control. Latham said that mustangs can easily double their population every three to four years, leading to overpopulation, followed by routine roundups into corrals.

Latham said the purpose of the film is to provide information and share different stories from horse trainers, veterans, fertility control groups, and sanctuary workers about the experience of working with and building bonds with wild horses.

Brian Pratt, the film’s cinematographer, revealed that making a film about wild animals can be challenging at times. On some days, the crew had to drive around for hours before spotting any wild horses.

“We had to sometimes be very gentle and stay away from them, because, you know, they’re beautiful animals, but they can be spooked very easily,” Pratt told NTD Television.

The film crew used two cameras to film the mustangs from a distance in the wild.

More than 80,000 wild horses roam federal lands in the United States. Pratt and Latham described how a lot of people said they were unaware that wild horses even existed and were unaware of the connection they have with U.S. history.

They hope the documentary can allow viewers to understand the journey and situation mustangs face, while at the same time showcasing the horses’ bonds with each other and humans, their perseverance, and their spirit of freedom.

With reporting by NTD’s Jason Blair