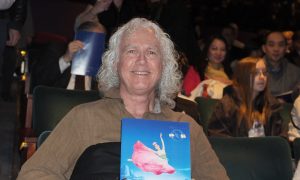 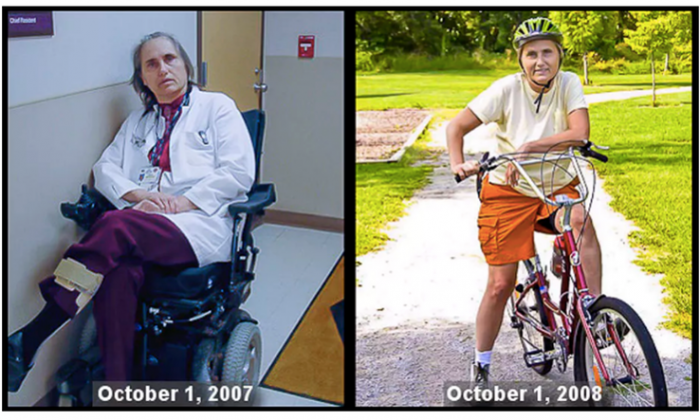 Terry Wahls before and after she changed her diet. (Courtesy of Terry Wahls)
Lifestyle

Out of my wheelchair and back on my bike: Why I'm putting MS diet to the test
By Terry Wahls
biggersmaller
Print

When I was first diagnosed with MS, or relapsing-remitting multiple sclerosis to be precise, I did what most doctors do when they are diagnosed with something serious—I began reading the latest research. I was distressed to discover that within ten years of diagnosis, half of those with MS are unable to work due to severe fatigue and a third have a gait disability.

Multiple sclerosis is a chronic inflammatory disease in which the immune cells attack and damage the brain and spinal cord. At first, the episodes are marked by periods of worsening, (relapses) and periods of improvement (remissions). Over time, the damage accumulates, and the brain and spinal cord slowly shrink, and the level of disability steadily increases. Each patient is uniquely affected due to the specific location of the accumulating damage.

Doctors prescribed me the newest drugs, but I continued to decline. A vegetarian for 20 years, I considered the paleo diet—which mimics the basic diet of our pre-agricultural hunter-gatherer forebears—which claims to have the potential to treat auto-immune conditions.

According to paleo diet advocate Loren Cordain, by not eating grains, legumes (pulses) and dairy—foods that were introduced into the human diet 10,000 years ago—patients will have fewer dietary lectins (proteins found in most plants). Cordain’s theory is that dietary lectins increase inflammation in susceptible patients. He also theorized that some patients with rheumatoid arthritis would have fewer symptoms if they consumed less lectin-containing food.

I read Cordain’s article in Mayo Clinic Proceedings, which examined the differences between paleo and the modern Western diet and the theoretical benefits of using the paleolithic diet to reduce the risk of cardiovascular disease. I decided the risk of adopting his dietary suggestions in an attempt to slow my decline was low, so I went back to eating meat.

The next year my illness transitioned to secondary progressive multiple sclerosis. In this phase, no spontaneous remissions occur. Once lost, functions are gone forever. I got the recommended tilt-recline wheelchair. In an effort to slow my decline I underwent chemotherapy to deplete my immune cells and make it more difficult for them to continue their assault on my brain and spinal cord. But it didn’t work.

By 2007, seven years after my initial diagnosis, I was too weak to sit up in a regular chair. I was constantly exhausted and had increasingly severe bouts of trigeminal neuralgia—intense jolts of electrical face pain that were harder and harder to stop.

That summer I researched what I could do to protect my brain, focusing on vitamins and nutritional supplements to further support my mitochondria—the powerhouse for each cell. According to one theory, brain diseases may be more severe due to mitochondria that are not working well. I began taking more supplements to support my cell health, but still little changed.

So I decided to self-experiment, hoping, if I was lucky, to slow the progression of my MS. As a doctor, I certainly did not expect to walk around the hospital again making my rounds. Or go hiking or biking again. Or lead an important clinical trial testing my theories on using diet to treat multiple sclerosis-related fatigue. But that’s what happened.

By identifying the key nutrients important to brain health, I redesigned my paleo diet. I wanted to maximize my intake of the nutrients I’d been taking in supplement form—getting them instead directly from the food I ate.

Three months after starting the diet, my fatigue was gone. The electrical face pains were gone too. I began doing my hospital rounds using a cane. After six months, I began walking without a cane. At nine months I got on my bike again for the first time in six years and biked around the block. After 12 months of this new way of feeding my cells, I biked 18 miles with my family. If I went off the diet, the electrical face pains came back within 24 hours.

Looking at the Science

Paul Rothman, Iowa University’s then-chief of medicine, asked me to write a case report because recovery from progressive multiple sclerosis is rare. I worked with my treating medical team, who wrote up my case, which documented my dietary changes, supplements, neuromuscular electrical stimulation treatment, and intensive physical therapy.

Rothman also asked me to write up the protocol that I had used to conduct a safety and feasibility study. My protocol included diet, stress reduction, exercise and electrical stimulation of muscles. The pilot study suggested that the complex protocol “may reduce fatigue and improve quality of life of subjects with progressive MS.”

Since then, we have conducted two more small pilot studies with favorable results showing that the dietary intervention is safe and can be sustained by over half of the people who begin the protocol. The National Multiple Sclerosis Society is funding our clinical trial to test the effect of diet on fatigue. It will complete in 2020.

Now, the idea that diet has an impact on multiple sclerosis is being considered by MS researchers, and many neurologists and patients. However, neurologists at the US National Multiple Sclerosis Society, said: “While many different dietary strategies are being promoted for people with MS, currently there is insufficient evidence to recommend any of these strategies.”

Until the results from my clinical trial are in, we won’t be able to say how effective my dietary protocol is at reducing fatigue in people with multiple sclerosis. But from my own experience, what I eat does matter.

Dr. Terry Wahls is a clinical professor at the University of Iowa in the departments of internal medicine and neurology where she conducts clinical trials testing the efficacy of therapeutic diets in the setting of multiple sclerosis.  She is the author of “The Wahls Protocol: How I Beat Progressive MS Using Paleo Principles and Functional Medicine” and the cookbook “The Wahls Protocol Cooking for Life: The Revolutionary Modern Paleo Plan to Treat All Chronic Autoimmune Conditions.” You can learn more about her diet at www.terrywahls.com/diet.