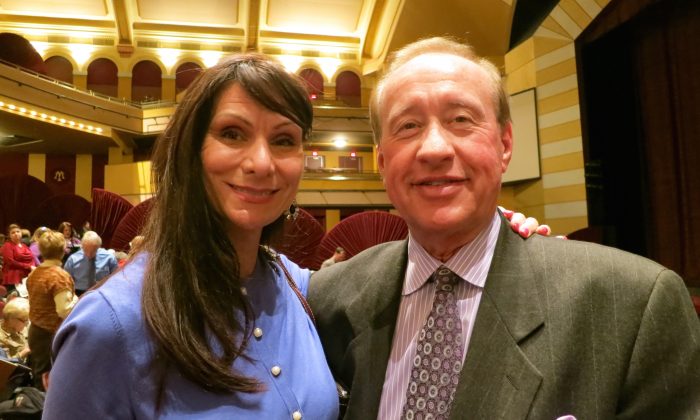 MILWAUKEE—“I would recommend the show to people coming tomorrow,” said Dr. John Kelly. “I really enjoyed it,” he said of Shen Yun Performing Arts World Company, which appeared at the Milwaukee Theatre on March 5.

Dr. Kelly, who owns the Clinic Family Practice in Oconomowoc, Wisc., especially liked one folk dance called  Mongolian Chopsticks  because he liked the rhythm in the use of the chopsticks and the athleticism of the males dancers.

Attending with Dr. Kelly was Krin Kramer, a social worker. She commented on how old the Chinese culture was and that it was very spiritual.

“I didn’t realize there was that much suppression going on in China, I thought things were better there,” Dr. Kelly said.

Several of the nearly 20 dances that make up the evening’s program depict the current struggle in China of Falun Gong against it persecution at the hands of the communist regime. A Falun Gong (also known and Falun Dafa)practice consists of meditative exercises and live by the principles of truthfulness, compassion and tolerance.

Ms. Kramer noticed after seeing brutal oppression for just wanting to meditate depicted in these dances “that, I’m appreciative of my culture, that I’m able to express myself how I want to and even if I do become oppressed there are ways around it. … I would never be oppressed to that level” in the United States, she said.

She was also happy that at the end of that dance the oppressed woman “was liberated, so that was really a happy ending.”

What this ancient culture offers today’s world, according to Dr. Kelly, is “the elegance of the dance,” and “the gracefulness of the people.”