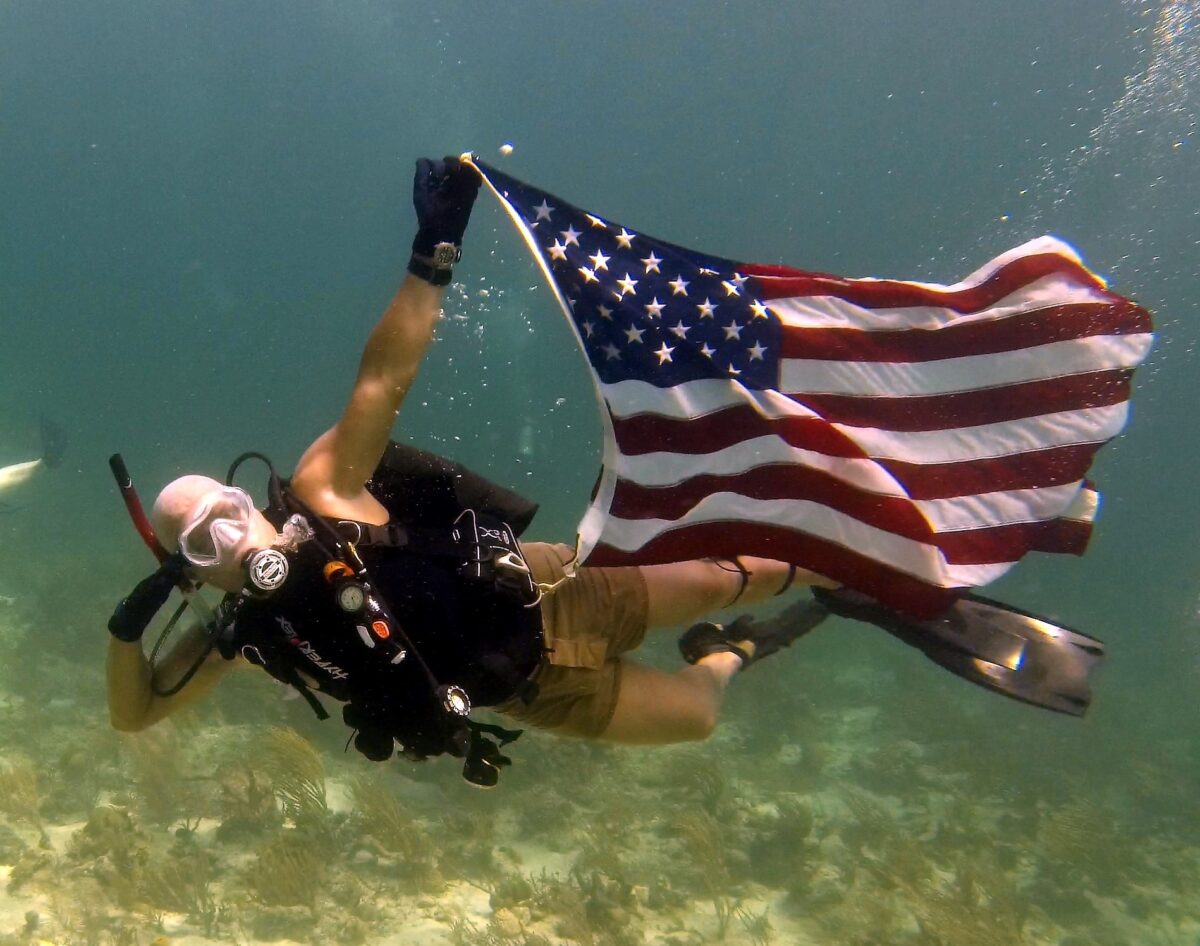 In the spring of 2014, while returning from “a whirlwind RV road trip” to his sister’s wedding, Josh and Neysa Grzywa and their two children learned that two more of Josh’s military “brothers” had committed suicide. Both of these suicides happened within a week. Eight of his military friends had died this way. All eight died within a six-week span. As a result of these significant tragedies, Deep Sea Valkyries, or DSV, was born.

Josh and Neysa began to consider why Josh, who had served 15 years in the Army and had been deployed multiple times in support of the global war on terror, had been able to readjust successfully after his back surgeries and his return from the military. In 2014, he was medically retired because of severe spinal injuries that he sustained in a mortar attack in Iraq. He received the Purple Heart.

“I could no longer do skydiving or rock climbing,” Josh remembered, “so diving became essential to my recovery.” This awareness led to the couple’s founding Deep Sea Valkyries (DeepSeaValkyries.com), a veterans’ trauma-counseling retreat program.

“We chose scuba diving as the primary activity because of its unique benefit for people with physical trauma,” Josh explained. “Amputees, people with partial paralysis, and those with neurological conditions can all participate.”

DSV is open to vets of all eras, and it’s tailored specifically toward combating post-traumatic stress disorder. DSV has served vets from the present time all the way back to those from the Vietnam War, according to Neysa, who is the director of business operations.

“Diving was the activity that Josh took up as a new hobby, because regardless of one’s disability or injury, she or he is weightless in the water and can participate fully,” she said.

DSV’s first retreat was held in July of 2016. Josh, who is president, emphasized the importance of meaningful counseling, in which the veteran can be fully invested. Vets often begin counseling with the Veterans Administration for an hour each week. But around that, Josh said, they are bombarded with all of the issues that we all deal with day to day, which can be overwhelming for them.

DSV’s retreat program takes vets out of the home setting. They don’t have Wi-Fi or cell phones. Being separated, they are free of concern about what family members or friends might think of their counseling sessions, he explained. “They only need to focus on themselves and how to shift the trajectory of their lives.”

“Treating trauma effectively doesn’t happen in a week,” Josh observed. “There’s no quick fitting of a cast and prescribing medication for pain, as one would receive with a broken bone. Trauma counseling takes time.”

“We tell people right up front, we’re not going to fix you in a week,” Josh continued. “They need to shift the trajectory of their lives. We try to arm them with tools so that after they return home, they will seek out treatment in long-term care programs, so that they’ll be in a better place with friends or whatever the case may be.”

He said that when many of the vets return home, they don’t have large vet groups in their communities. “One of our members has participated with his daughter. After the vets’ initial retreat, they can include family members.”

“People with soft-tissue injuries are freed by being under water,” Josh explained. “The only sound is the sound of their own breathing. Very tranquil. It’s well known that breathing exercises help to bring people who have suffered trauma back to the present moment and remove them from painful memories.”

In February of 2022, DSV will hold a reunion event in the same place where the alums’ first retreat took place, Josh said. “They will be engaged in physical activities together, and they open up to share the beginning of the changed trajectory that flowed from the first retreat. This helps family members to connect in deeper, more meaningful ways.”

The essential goal of their week at sea is to shift the trajectory of their lives, according to Josh. “The vets who join us are not happy with the status quo of their lives. They’re looking for a change. Many have participated in VA programs in which they haven’t really had needs met,” he explained.

He indicated that the objective is to get them on a path of greater hope and for them to have a brighter outlook. Josh and Neysa said they know firsthand that there are challenges that vets face with some of the organizations that serve them.

“We try to be very careful not to over-promise or to guarantee that we can do something that we can’t,” Josh emphasized.

Primary retreats are held each summer, and the window for applying to participate usually runs through the entire month of December. Each retreat departs out of Nassau, Bahamas, for a week. Participants will be at sea the entire time, according to Neysa.

She reflected that each day begins and ends with a devotional, led by DSV’s military chaplain, who focuses on the moral injuries of war. DSV is open to vets from all religions and to those without religious affiliation, but it was founded on Christian principles. This is a prominent foundation of the program, she said.

All participants are expected to participate in all aspects of counseling. There are morning and evening group-counseling sessions, facilitated by a licensed counselor who focuses on combat PTSD. Travis, the current counselor, who served in the Marines, also works as a counselor for the VA.

A former Navy fighter pilot and current counselor helped to create the DSV program, she said. Jeff Hensley still serves as DSV’s director of clinical services and oversees the content of the counseling materials. He retired from the Navy after 21 years and went through the VA counseling system himself. He experienced all of the shortfalls of that system, and this prompted him to go back to school to become licensed so that he could help other vets.

According to Neysa, the program has added two additional counselors. Both are vets.

Participants must be dive-certified before their first event, she explained. DSV works with local dive shops to arrange training for applicants who aren’t certified, so that they can become dive-certified and open-water scuba-certified prior to the retreat.

DSV provides all gear needed by participants, so there is no cost to vets to participate. Patriots for Disabled Divers, an affiliate organization, provides dive training on a year-round basis, if the vet lives in an area with one of their affiliate shops. Vets need to apply separately for this service, she indicated.

During retreats, participants typically dive three to four times, depending on the day. Opportunities for deep-sea fishing and exploration of remote, uninhabited islands also are provided. “A lot of vets who join us heard about DSV from word-of-mouth referrals from other vets.

“These activities reinvigorate participants, allowing them to experience again, service-related camaraderie, while equipping them with tools for dealing with issues that many vets face when transitioning from service,” she explained.

Former participants often return in various staff roles, as a way to pay it forward to other vets. The present primary counselor, Travis, was a participant in 2018, and he has returned for the last three retreats as a counselor.

A current dive master, Matt, was a participant in 2017. He has returned in three subsequent years in staff roles, she said.

A 2019 participant, Felipe, had never dived prior to applying to the program, and he has now worked his way up to the highest level of instructor, through the Professional Association of Diving Instructors, PADI, and is working in the dive shop that trained him, according to Neysa. He now trains other vets. He returned as a dive-master in the recent retreat, which had to be rescheduled because of the pandemic.

Previous participants have gone on to either start school, return to school, or open their own businesses and give back in various volunteer roles to other nonprofits serving vets, as well as programs that serve communities.

“It has been such an honor to be a part of their healing process, as they write their next chapter, post-service,” Neysa said.

Up Armor, a new project that was created by Project Healing Heroes founder and CEO Lieutenant Colonel David Tharp, will partner with DSV in January 2022 to provide continuing care via Zoom counseling sessions, Josh and Neysa said. “He has graciously partnered with us to be an extension of our program.” Meetings will take place once or twice a week, led by a psychologist. Up Armor will focus on some of the same issues that the primary retreat dealt with.

Up Armor will serve vets from around the world, Josh said. Those from Japan and Australia, for example, and from across this country, will meet in real time for these Zoom meetings. This will allow them to maintain their connection within the vet community, and it will encourage their continuation of care.

Both of Neysa’s brothers served in the military. Aaron Fulsome served in the Marines, while Owen served in the Army and was stationed in Iraq, along with Josh. Owen was wounded in Samarra, Iraq. Neysa explained that when she traveled to visit Owen, she met Josh. Owen, like Josh, received the Purple Heart. Josh and Neysa’s two children are Sydney, 10, and Killian, 8.

“Sydney just completed her junior open-water scuba certification through PADI and is a natural at diving,” Neysa reported. “Killian can’t wait to turn 10, so he can get certified as well.”