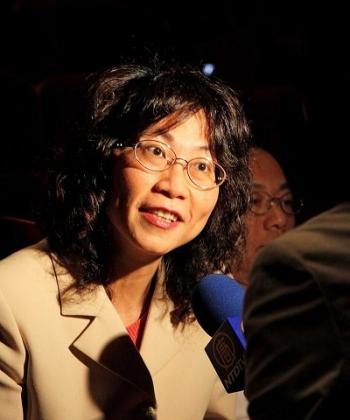 Minister of the Council of Labor Affairs: ‘I cannot help crying’

TAIPEI, Taiwan—Wang Ju-Hsuan, Minister of the Council of Labor Affairs, attended the Divine Performing Arts (DPA) Show in Taipei on the afternoon of March 1. After seeing the act about the persecution of human rights, her eyes couldn't help filling with tears.

She said that it was very effective to present human rights issues through the arts and believed that every one would be moved by the show.

DPA presented its sixth show in Taipei, on the afternoon of March 1. It again attracted an enthusiastic full house. In the audience were members of the Taipei County Hardware Association and Ms. Wang Ju-Hsuan, Minister of the Council of Labor Affairs, Executive Yuan.

When interviewed during the intermission, she said that the DPA’s magnificent presentation of Chinese classical dance was very touching. Along with others, she was moved to tears by the dance Heaven Awaits Us Despite Persecution.

Minister Wang explained that what she learned in the scenario was that a family was persecuted by the Chinese communist regime due to the father’s steadfastness in his belief. But, more than that, the mother and their child were also persecuted. Though the father was persecuted to death due to his firm belief of Truthfulness, Compassion, and Forbearance, eventually he was taken to heaven by gods. His family suffered deeply.

“I felt it was very touching. Through dance, the plot made the audience feel as if they were personally being persecuted. I think the show was very exquisite,” she said.

As to the reasons why Ms. Wang was touched so deeply and why it was a magnificent experience for her to see the DPA show, she replied with smile, “In fact, I was just thinking over whether it was because of my age. The older we are, the easier we might be moved by something like this. When seeing the show, I was so deeply moved that I couldn’t help crying.”